Another Nail In The Antibiotic Coffin 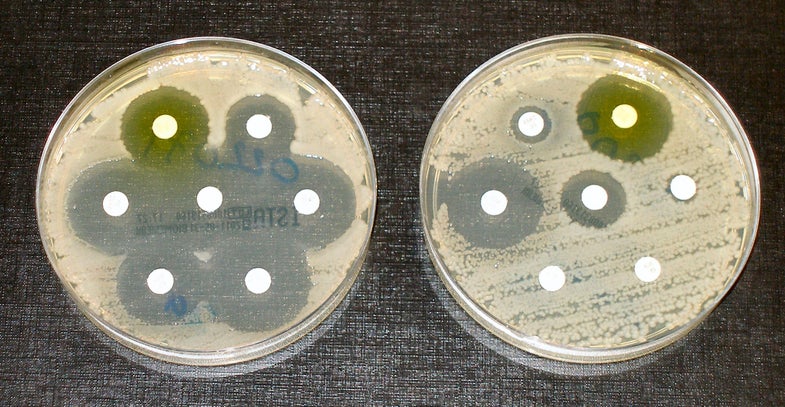 Over the last week, there has been a flurry of focus on antibiotic resistance. The attention stems from a recent article reporting the discovery of an antibiotic-resistant bacterium in the United States. While at first glance, this may not seem to be a reason for panic, the actual target of resistance–a class of antibiotics known as colistins–has led some to suggest the end of antibiotics is near.

The report involved a woman in Pennsylvania who was being treated for a urinary tract infection. As per usual in today’s world of in-depth diagnostics, the bacteria were sent to a lab for testing. As expected, the bacterial species was Escherichia coli, a normal cause of UTI. Yet, this isolate, known simply as MRSN 388634, was a little more trouble than expected thanks to antibiotic resistance.

There are numerous mechanisms available for bacteria to resist antibiotics. The most common course of treatment is penicillin. Despite the fear in the public, a large number of bacterial species are still killed in the presence of this drug. However for over 70 years, researchers have known certain bacteria can survive. They accomplish this by using proteins called β-lactamases, which are enzymes that break down the antibiotic. Bacteria with these genes are widespread but usually can be treated with other so-called higher-generation antibiotics.

Unfortunately, some bacteria have gained the ability to defend against these drugs by incorporating another type of enzyme. Collectively, they are known as the cefotaxime hydrolyzing enzymes, commonly referred to as CTX-M. These are similar in form to penicillin but are able to deal with those resistance enzymes. However, there is an enzyme capable of overcoming the carbapenem attack. It’s officially called a metallo-β-lactamase and has sometimes been given the name NDM-1, based on the discovery of one such version originating in New Delhi. Bacteria containing these enzymes are also known as Carbapenem-Resistant Enterobacteriaceae, but most people simply call them CRE.

Thankfully, in this case, this enzyme was not found and so the woman could be treated. She was eventually given the all clear and went on with her life. All things considered, the case represented the reality of treatment in the modern world but offered no signs of an impending antibiotic apocalypse.

That part of the story comes from a test conducted in the lab on the MRSN 388634 strain. At the end of 2015, a relatively unknown resistance gene was identified in China. It’s called plasmid-mediated colistin resistance, or mcr-1, and as the name implies, has the ability to neutralize colistins.

Colistins have been regarded as the ‘last resort’ because internally, they can be toxic. There is a risk for side effects, particularly in the kidneys. When it comes to infections such as a UTI, colistins would be considered to be the least favored choice.

However, colistins are more widespread than you may think. They are approved for a variety of over-the-counter medications. All one has to do is look for the name “polymyxin-B” on the label to find it. On the skin, it’s relatively harmless and until the discovery of mcr-1 was considered to be the perfect healing aid.

Due to the discovery of mcr-1, researchers around the world have worked to identify the location of the gene. It’s been found in a number of countries but not in the United States. But, when the researchers examined MRSN 388634, they found it. Although it had no relevance to the case, in terms of overall significance to public health, this was a shocking discovery. In short, mcr-1 was now in America.

For most public health officials and researchers, this was inevitable. The gene had been circulating for years and apparently seemed to spread quite well between bacteria in both animals and humans. It was just a matter of time before it landed on American soil.

In the public eye, however, this revelation seems to be the death knell for antibiotics. Now that the gene resisting antibiotics of last resort, the end is surely near. But this is not the case with MRSN 388634 strain, as it is not fully resistant to antibiotics. This case may signify another nail in the coffin for antibiotics, this is by no means the end.

As for what might cause the end, the term is known as pan-drug-resistance, or PDR. When a bacterium has achieved this milestone, antibiotic treatment is no longer possible. While we may be hoping this may never occur, researchers have known about them for years. Bacteria such as Acinetobacter baumannii and Pseudomonas aeruginosa have already reached this troubling level.

Although MRSN 388634 may be in the headlines, these other species are the real reason we need to think about reducing antibiotic use. Without meaningful action to lessen the use of these drugs in medicine and agriculture, we can expect the number of pan-resistant organisms to increase. Should this occur, then we may reach that pivotal point of panic. Until then, the best thing to do is be prudent.