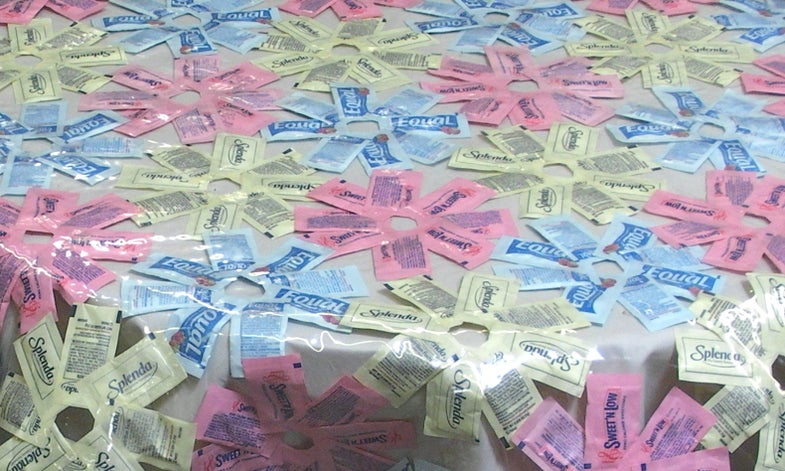 But some new research suggests sugar substitutes could actually contribute to soaring rates of obesity and diabetes by spurring metabolic changes linked to those diseases.

As Alison Abbott reports this week in Nature, a research team in Israel examined both mice and people for metabolic responses to consuming artificial sweeteners. Groups of mice consumed diets for 11 weeks that either included an artificial sweetener -– saccharin, sucralose or aspartame – or a natural sugar: glucose or sucrose. The mice consuming the artificial sweeteners became glucose intolerant: a metabolic disorder in which the body has difficulty digesting the sugar glucose (a carbohydrate), resulting in overly high blood sugar levels. Glucose intolerance is linked to diabetes, and is sometimes a factor in rising body weight.

Saccharin had the most impact on glucose tolerance. Other factors, such as whether the mice were already lean or obese, how much they ate and drank, or how much exercise they got, did not change the results.

The team then fed mice with diets containing either natural sugar or saccharin. They found that the saccharin-consuming mice developed glucose intolerance and that their types of gut bacteria changed. The mice consuming glucose or sucrose did not show these effects.

Taken as a whole, these findings suggest that the sugar substitutes were affecting the gut bacteria, which in turn caused the glucose intolerance.

To begin determining if humans would be prone to the same reactions, the researchers examined data from 400 human subjects in one Israeli clinical nutrition study. They found a correlation between consumption of artificial sweeteners and weight gain or glucose intolerance. But this didn’t necessarily indicate a link, because people in the study might have started consuming artificial sweeteners in response to gaining weight, rather than gaining weight because they consumed the sugar substitutes.

So the scientists also “recruited seven lean and healthy volunteers, who did not normally use artificial sweeteners, for a small prospective study,” writes Abbott. “The recruits consumed the maximum acceptable daily dose of artificial sweeteners for a week. Four became glucose intolerant, and their gut microbiomes shifted towards a balance already known to be associated with susceptibility to metabolic diseases, but the other three seemed to be resistant to saccharin’s effects.”

When the gut bacteria of the affected human subjects were transplanted into sterile-gut mice, the mice developed glucose intolerance. Mice receiving a bacteria transplant from the saccharin-resistant human participants did not.

So far this study is most informative in terms of how sugar substitutes affect mice. As this write-up by the U.K.’s National Health Service notes, more thorough human testing is needed to prove that they’re more dangeous than helpful for people. But if the findings move you to action, one option is to curb or cut both the natural and artificial sweeteners in your diet.