This is not an excuse for second breakfast. 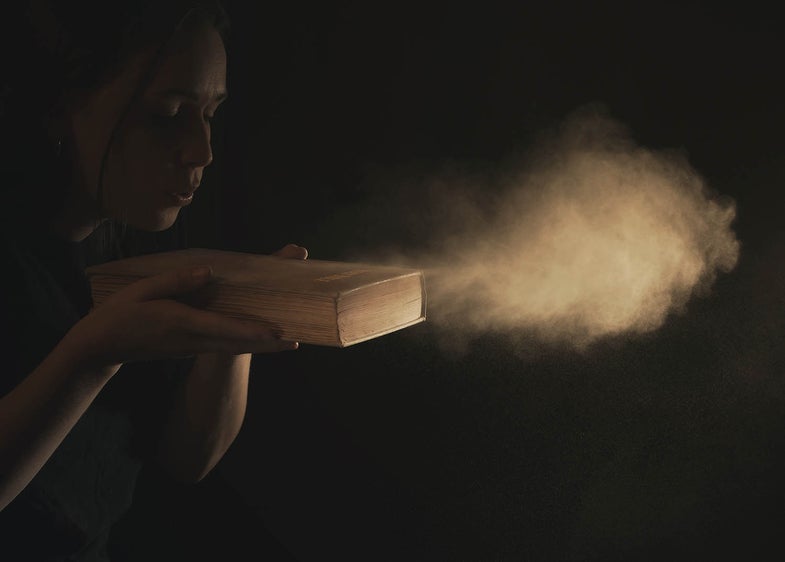 We know that dust can make us sneeze, but can the scourge of clean homes everywhere also make us gain weight?

Possibly, according to a recent study in Environmental Science and Technology. In a manner of speaking, anyway.

Earlier research had discovered that household dust—a mixture of skin, pollen and other fine particles found in the local environment—contains endocrine-disrupting chemicals, or chemicals that can interfere with the body’s natural hormonal processes. Hormones are chemicals that help regulate a host of the body’s functions, from fertility, to mood, to weight.

“As it turns out there’s a wide variety of consumer products that leach various classes of chemicals into the indoor environment, and many labs have found that they kind of accumulate over time in house dust,” says study author Christopher Kassotis, an endocrine researcher at The Nicholas School of the Environment at Duke University.

There has been a lot of work over the past few years to understand the bioactivity of these chemicals—to better understand which hormones the chemicals interact with in the body, and what adverse health outcomes might be correlated with exposure. In the past, people focused mainly on whether or not a chemical was immediately toxic. If it didn’t make consumers sick or kill them shortly after use, it was probably fine. But in recent years, we’ve become more aware that some chemicals might not kill us immediately, but could set us up for health problems in the future. And recently, researchers have begun to examine the idea that chemicals in our environment might even affect our metabolism.

In this study, Kassotis (along with Kate Hoffman and Heather Stapleton, also from Duke) took 41 chemicals identified in earlier studies as being present in household dust. These included phthalates, which are used to soften plastics like vinyl; parabens, a widely-used preservative in personal care products; and common household pesticides, like permethrin—which is used to make clothes impregnable to insects like mosquitoes and ticks. Kassotis and his colleagues used what’s known as a mouse pre-adipocyte cell model—pre-adipocyte cells are precursors of fat cells—to see if those chemicals might trigger fat development.

“This model is quite robust, people first started describing it fifty years ago,” Kassotis says. “These are fat precursor cells, so as they develop over the course of two weeks in the lab they come to resemble what we would think of as a mature white fat cell. Fat cells begin to proliferate around the periphery of the cell.”

If a chemical makes the precursor develop more fat-like cells—either because the cells themselves become significantly larger, or because they become more numerous—than the baseline, it’s an indicator that the chemical may trigger the process by which cells store fat. About two-thirds of the chemicals the team tested were active in driving fat cell development.

In another portion of the experiment, the study authors collected dust samples from 11 homes in central North Carolina. The residents had lived in their homes for at least two years, and they had been directed not to vacuum for at least two days before the sample collection. Yes, these noble homeowners were told not to clean their homes in the name of science.

When the researchers ran those dust samples through the same mouse pre-adipocyte cell model, 10 out of 11 tested positive for some kind of fat-triggering activity.

“One of the big take aways,” says Kassotis, “is that metabolic disrupters are probably much more common than we’ve thought of up until now.”

This is concerning, especially for households with children—who tend to be more sensitive to these kinds of endocrine disrupting chemicals. Part of this sensitivity is because kids are tinier, so an equal dose given to a kid and an adult would have a bigger impact on the smaller-bodied child. But that isn’t the only reason.

“The other real concern about developmental exposures is that they can permanently change how a cell can function,” says Jennifer Schlezinger, an associate professor of environmental health at Boston University School of Public Health who was not involved in this study. “So exposures early in life are more likely to have long term impacts, even if the exposure ends. In an adult, when the organs are fully formed, certainly these exposures can have an effect. But they’re likely not to be permanent, which is very different from a developmental scenario.”

The EPA has estimates on how much dust your typical kid consumes in a day, as they crawl around floors and shove unwashed fists and toys into their mouths. According to the new study, those common levels of dust consumption might be enough to trigger the fat storage activity observed in mouse cells, though Schlezinger cautions that there isn’t a way to directly correlate the cell exposures in the studies with human exposure. When we go about our day, the contaminants have to come off of the dust and cross our skin barrier in some way—so only a portion of the chemicals that are attached to the dust are actually going to enter our bodies.

The researchers aren’t saying that household dust is the reason why Americans are heavier than we were a generation ago, or why people (and lab rats!) worldwide are getting fatter. And even if they tried to make such a bold claim, the study was done on mice cells—not in human cells (let alone an actual living person). That caveat is reassuring in many studies, but not necessarily in this one. “Because this model is so well evaluated and because we understand it so well, there’s been a large number of studies that have really taken this the whole way to humans,” says Kassotis. Epidemiological studies have already shown an association between higher exposure to some of these chemicals and adverse metabolic health in humans. We may not have direct evidence that they do the same things to our cells that they do to mouse cells, but the evidence certainly points in that direction.

“I think there’s a strong likelihood that if a chemical can stimulate [the cells used in the study] to turn into fat cells, that is a strong indicator that this chemical could potentially do the same thing in a person,” says Schlezinger. “I would hesitate to say it’s absolute.”

Schlezinger calls the study an essential first step, but there are questions it raises that don’t yet have answers. For example, while we know that the household dust triggered fat growth, we don’t know if the resulting fat behaves the way a white fat cell should. Do those fat cells function properly?

If you’ve ever wondered why someone might be overweight and metabolically healthy (with good blood sugar, low cholesterol, and so on) it’s because their fat cells are functioning properly. Someone else might have less fat, but if it’s metabolically unhealthy and clustered around organs like the liver, that sets them up for a host of cardiac diseases.

And we don’t yet know which chemicals in household dust are triggering the effect. An annoying thing about these kinds of bioactive chemicals is that depending on how they act on cells, they can magnify each other or even cancel each other out. So the effect could come from one chemical in the dust, or it could be all of them in combination. Generally, chemical safety tests don’t require us to understand the new effects of chemicals when they’re used in combination with each other. But the fact that 10 out of the 11 homes produced dust that triggered the fat storage response does suggest that the chemical, or chemicals, involved are fairly ubiquitous.

“I think it is essential that people understand that there are multiple chemicals in their homes that can have biological effects,” Schlezinger says. “And while there’s only a little bit of each one of those, altogether that could potentially result in a biologically significant level of exposure.”

Long story short: It’s too soon to tell whether or not these chemicals are making us gain weight. And even if this effect is demonstrated in humans, it’s most likely to only be a small contributor to our national weight problem. But Kassotis does say that an overwhelming and growing body of research, including this study, suggests that reducing our exposure to these endocrine-disrupting chemicals—within reason—makes sense.

To do that, Kassotis recommends cleaning your home often to minimize dust build-up, using wet mopping and wet dusting. Of course, that only works if the wet part is water or old fashioned soaps, not endocrine-disrupting chemicals. Kassotis also recommends avoiding plastics, especially for heating and storing your food in. Cut down on pesticide use around your home—those chemicals linger for a long time, so you should use them sparingly. A growing number of green personal care and furniture companies are eager to make money off of your chemical purge, but make sure you read up on the actual evidence against a chemical compound before cutting it out of your life. And don’t use a dust-free home as an excuse to give up on diet and exercise.