Real-time immune attack could pinpoint new interventions, thanks to a new procedure 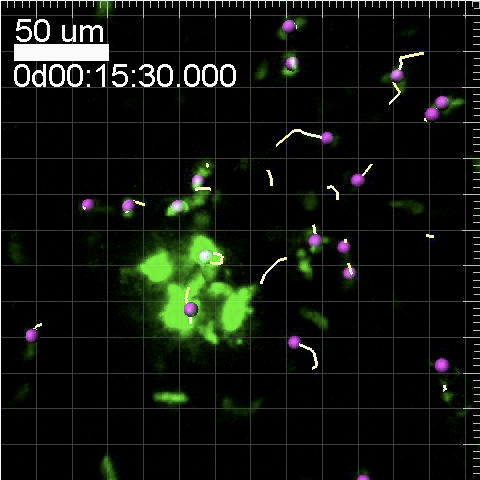 A new real-time view of immune cells attacking the pancreas sheds light on how type 1 diabetes unfolds, as white blood cells seek out and destroy insulin-producing beta cells. Researchers believe it could help point the way to new intervention methods to halt the destruction before the onset of type 1 diabetes, also known as juvenile diabetes.

Diabetes results from the body’s lack of ability to produce sufficient insulin, which keeps blood glucose levels in check. Type 1 is an autoimmune disorder in which the body’s T lymphocytes attack and kill the pancreas’ insulin-making beta cells; type 2 also involves pancreatic destruction and can result from several factors, though in this country it is often the result of poor diet and obesity. There is no cure, at least not yet. Watching exactly how the destructive process unfolds could be a major step in that direction, however.

Researchers at the La Jolla Institute for Allergy & Immunology used two-photon excitation microscopy and a new imaging technique to access a live, functioning pancreas in a mouse. The pancreas is small, soft and tucked away beneath other organs in the abdominal area, so it’s difficult to see in action. This study marks the first time researchers have used two-photon microscopy to study the pancreas (it’s previously been used to image the liver, lymph nodes and some other organs).

Two-photon microscopes use ultra-fast pulses of infrared light to excite fluorescent dyes that have been attached to specific cells. The IR light minimizes light scattering as well as harmful bleaching of tissues, so it’s useful for penetrating deep into live tissue, around one millimeter.

Led by Ken Coppieters, now at Ghent University in Belgium, La Jolla researchers attached green and blue fluorescent proteins to cytotoxic T cells, a type of white blood cell, and transplanted them into a mouse. The cells migrated randomly throughout the pancreas, making their way to beta cells and eventually killing them. Though they moved in random patterns, the cells were observed to accumulate within and around the β cell population, the authors say. They moved at an average 10 microns per minute and up to 25 microns per minute — not the world’s fastest cells by a long stretch. This comparatively slow process could be one reason why diabetes takes a while to present itself clinically — by the time a patient is diagnosed, up to 90 percent of his or her beta cells have already been destroyed.

This entire cell-hunting process was imaged with the two-photon microscope, and you can see a video of it below. The live imaging of the white blood cells is “remarkable,” according to George Eisenbarth, M.D., a prominent type 1 diabetes researcher and executive director of the Barbara Davis Center for Childhood Diabetes in Denver.

“These images provide critical information about the disease process, in particular showing us the reasons why the beta cell destruction occurs very slowly over time,” he said in a statement. “Such information may enable new approaches to stop the destruction process, with the ultimate goal being prevention.”

Researchers are still not sure what sparks the immune cells into destroying the helpful beta cells. But this study could spark new research into that question, as well as how their destructive abilities might be thwarted, said Matthias von Herrath, M.D., coauthor of the paper.

“These studies suggest that we may need to find a way to prevent the T cells from accessing the pancreas in the first place, since once they do, they have the ability to destroy several beta cells at a time,” he said.

The paper appears in the Journal of Clinical Investigation.