This Hormone Found In Mice Livers Could Curb Your Sweet Tooth 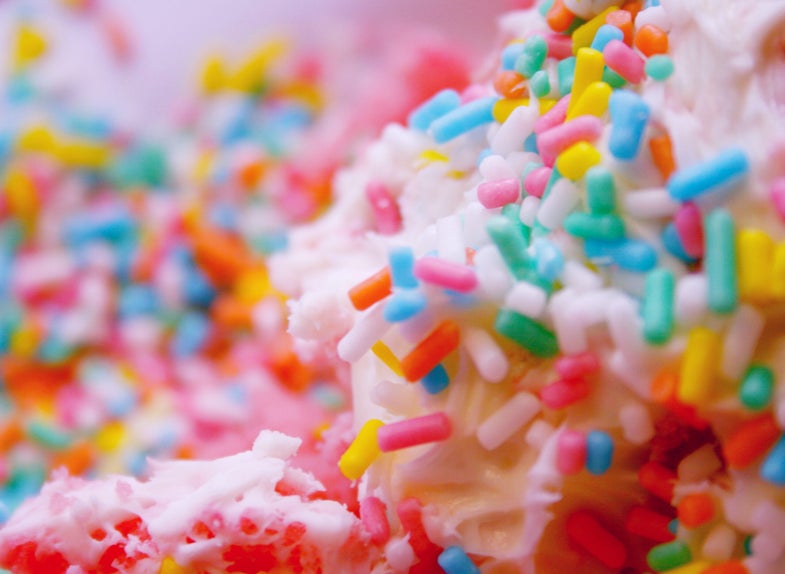 Is your mouth watering? Scientists may soon be able to limit how tasty this looks to you. Pink Sherbet Photography via Flickr, CC by 2.0
SHARE

Humans love sugar; no matter if it’s in cookies, candy, or even fruit, we can’t get enough of the stuff. Some people struggle to stop eating it, which can lead to obesity or diabetes, but scientists were never really sure how the body regulates those cravings. Now a team of researchers may have discovered how by looking at mice. The scientists found that in the rodents, a hormone generated by the liver suppresses the brain’s sugar cravings. The study was published last week in the journal Cell Metabolism.

Researchers have known for a long time that certain hormones affect appetite and cravings, but these hormones aren’t produced by the liver (they’re made by other organs). For this study, scientists decided to look at a liver-generated hormone called fibroblast growth factor 21 (FGF21), which they knew to regulate the energy level (carbohydrates) in the blood.

The scientists thought FGF21 might affect taste preferences, too. So to test the idea, they created two groups of genetically modified mice: ones whose bodies couldn’t produce FGF21, and another group of mice that would overproduce the hormone. Then the researchers offered the genetically modified mice different types of food with different levels of simple sugars, complex sugars, and carbohydrates, to see which type of diet they preferred. The mice without FGF21 had a strong preference for a high-sugar diet. Meanwhile, mice with overactive production of FGF21 went out of their way to avoid eating a diet of sweets. 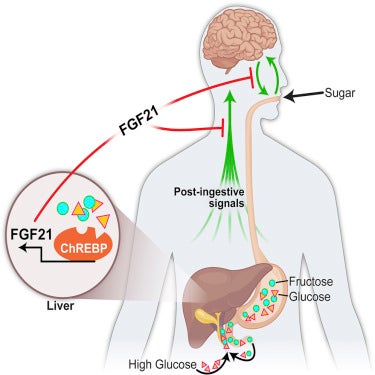 This illustration shows how the researchers believe the hormone FGF21 suppresses a person’s desire for sugary foods.

According to the researchers, these findings indicate that FGF21 suppresses cravings for simple sugars. Notably though, it doesn’t seem to have affected the mice’s desire for complex sugars or carbohydrates.

In future studies, scientists plan to investigate which neurons in the mice brains are affected by the hormonal shift. Right now, they suspect that these neural pathways are in the hypothalamus, the part of the brain that regulates hunger and links the endocrine and nervous systems.

If similar functions and pathways exist in humans, scientists could find a way to suppress our desire for sugar, helping us curb our impulses to eat sugary foods and other sweet treats in quantities that aren’t healthy. And while that may be bad for sugary-food makers, it would be a victory for human health and wellness worth savoring.