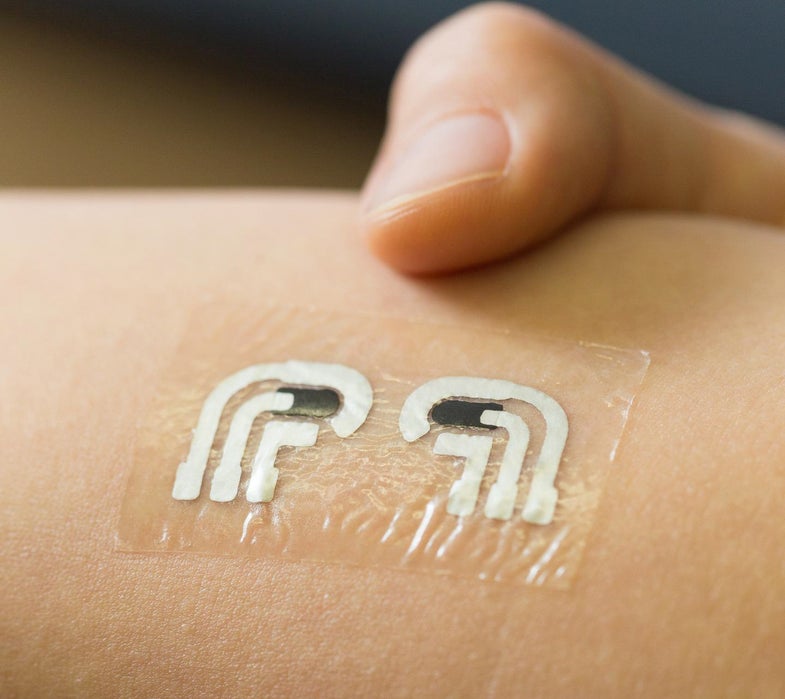 Diabetics often prick their fingers up to eight times a day to check their blood sugar. Researchers have long looked for a solution that provides constant monitoring without being so invasive, and researchers at the University of California San Diego have come up with a new needle-free design that could turn out to be less painful, yet just as effective, as the finger-prick method.

The UCSD team printed electrodes onto standard temporary tattoo paper and paired it with a sensor. After each meal, the electrodes generate a current for about 10 minutes. The current draws the glucose—a type of sugar that diabetics have trouble breaking down—up near the skin’s surface, allowing the device to read the glucose levels. The glucose is carried by sodium ions, which have a positive charge. By measuring how strong the charge is just under the skin, the sensor estimates how much glucose is in the bloodstream.

The researchers tested the device on seven non-diabetic people and found that the tattoo’s glucose measurements were consistent with the traditional finger-prick testing method. Amay Bandodkar, a nanoengineering graduate student at UCSD, who worked on the study, said in a news release that each temporary tattoo would work for up to a day, and would cost users only a few cents per tattoo.

The new device builds upon the GlucoWatch, a device released in 2002 that also used electrochemical technology. The watch was never widely used because it caused skin irritation, but the team notes that the tattoo would not have the same effect because it uses a different method of measuring glucose, as well as a lower electrical current.

This isn’t the first time researchers have tried to help diabetics using tattoos. In 2010, a team at the Massachusetts Institute of Technology invented a nanoparticle ink tattoo that, when injected below the skin and matched with a sensor, could monitor glucose for up to six months before needing to be refreshed. However, as far as we can tell, this method has not been tested in humans.

Now the UCSD team is hoping to develop a way for the sensors to function continuously as well as provide a numerical readout of the glucose level. The team also hopes to expand the device’s capability, perhaps as a noninvasive way to deliver medicine.

The results of this study were published in Analytical Chemistry.