First imaged in 1995, this iconic kaleidoscope of color is part of the Eagle Nebula. 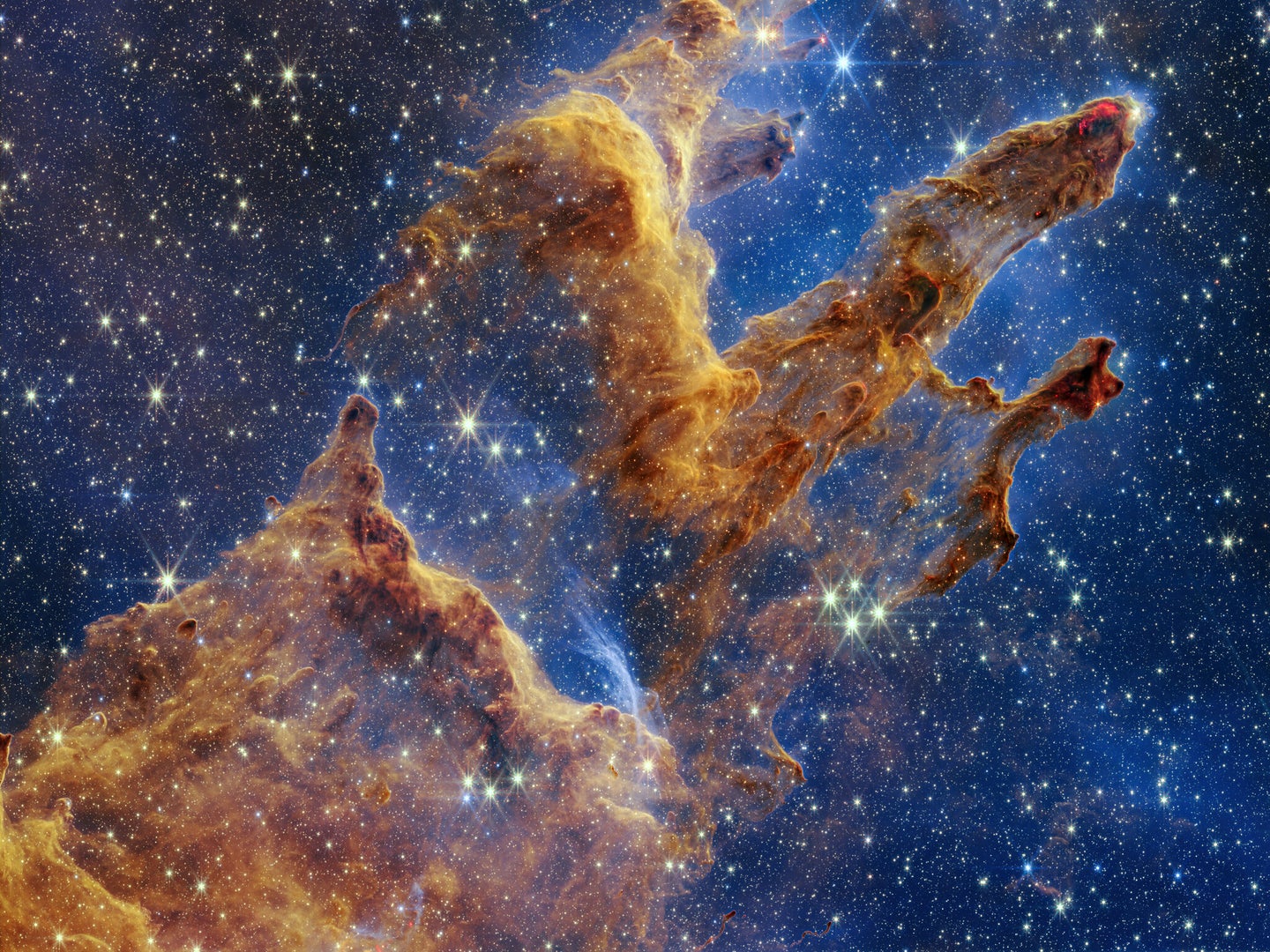 For the first time, NASA’s James Webb Space Telescope (JWST) has captured an image of one of space’s most iconic images—the Pillars of Creation. This part of the Eagle Nebula roughly 6,500 light years away from Earth is where new stars are forming within dense clouds of dust and gas. To some, the pillars look like majestic rock formations—but they are more like a massive, permeable cloud of dusty fog.

The Pillars of Creation were first made famous by NASA’s Hubble Space Telescope back in 1995. Aside from being exceptionally beautiful, the new JWST image will help researchers identify more precise counts of newly formed stars within the nebula, as well as how much gas and dust is in the region. The goal over time is to build a more clear understanding the dusty clouds and the stars that burst from them.

The young up-and-coming stars in this image are shown as bright red orbs, usually with diffraction spikes. These stars lie outside one of the dusty pillars, according to NASA. “When knots with sufficient mass form within the pillars of gas and dust, they begin to collapse under their own gravity, slowly heat up, and eventually form new stars,” writes NASA.

The image was taken using Webb’s Near-Infrared Camera (NIRCam), which can see space objects on a different light spectrum called the near-infrared range to create more detailed images like this one.

The wavy lava-looking lines are are ejections from the stars that are still forming within the dust and gas. From time to time, young stars shoot out supersonic jets which collide with clouds like these thick pillars. “This sometimes also results in bow shocks, which can form wavy patterns like a boat does as it moves through water. The crimson glow comes from the energetic hydrogen molecules that result from jets and shocks,” NASA writes in a recent release. This can be seen in the second and third pillars from the top. The young stars in this image are estimated to be only a few hundred thousand years old, which is young compared to stars like the red giant Betelgeuse, aged about 10 million years-old, and Methusula, the oldest star in the universe at a ripe 16 billion years old.

[Related: The James Webb telescope could help solve the mystery of dark matter.]

There aren’t any galaxies present in this view of the Pillars. A mix of of translucent gas and dust called the interstellar medium in the densest part of our Milky Way galaxy’s disk blocks our view of the deeper universe, according to NASA.

Launched into space on Christmas Day 2021, the JWST is an international partnership between NASA, the European Space Agency (ESA) and the Canadian Space Agency (CSA). It has been sending back some beautiful images since July, including a tarantula shaped nebula, exoplanets, and the planet Neptune’s rings.