James Webb is now slated for a 2021 launch—only a bajillion years late. 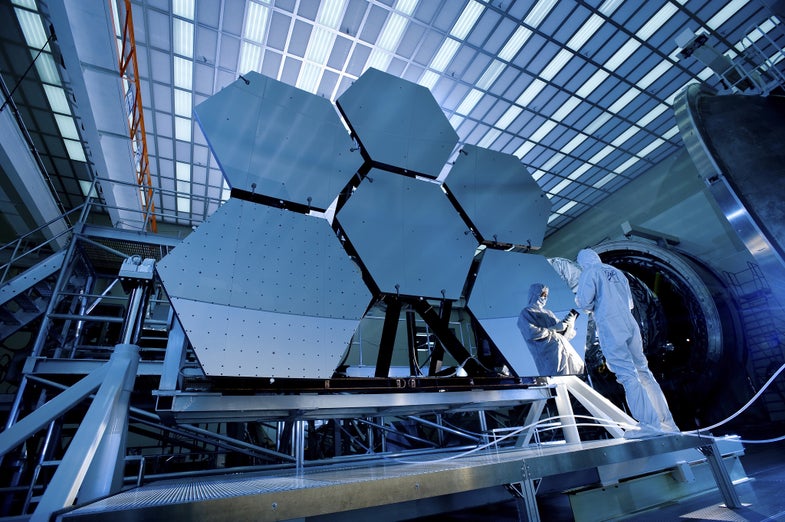 NASA researchers announced today that the James Webb Space Telescope would not be launched until March 2021, another delay of many for the long-anticipated space telescope.

This past March, NASA announced it would push the launch of JWST back from 2019 to 2020 to allow for additional testing. The space-based observatory, which entered development in 1996, was initially supposed to launch between 2007 and 2011. It didn’t.

Technical challenges delayed the spacecraft, and as the years passed, the costs kept adding up. Construction on the telescope was completed in 2016, but issues in testing caused more delays. The estimated tally for the project now rests at $9.66 billion, with the cost of development at $8.8 billion. That does not include money spent on the project by the European Space Agency or Canadian Space agency, both partners on the effort.

The final decision on funding for the JWST rests with Congress. NASA has enough funding to cover the project through 2019, but will need more money in 2020 and 2021. NASA will submit its budget request to the White House in September, which will make a budget proposal to Congress in early 2019.

When NASA announced the last delay in March, they also announced that an independent review board (IRB) would be set up to oversee the project as it inches toward the launchpad, and that NASA and the new IRB would take a closer look at the project’s myriad issues, analyze them, and issue a report to Congress this summer. The full report is available here.

NASA accepted all of the IRB’s suggestions and has started moving forward with implementing them. Tom Young, head of the IRB, noted on a press call that the March 2021 date comes nearly 29 months after the October 2018 launch date originally proposed in 2011.

Young also highlighted five factors that he says resulted in the extensive delays and additional $1 billion in cost. Those included human errors, which caused about $600 million. The others included embedded problems (issues with the hardware that were not noticed until later), lack of experience, excessive optimism, and systems complexity.

Some of the human issues included using the wrong solvent to clean valves on the spacecraft, damaging the hardware to the point where parts needed replacing. Then, in May, engineers found that screws and washers had come loose during a round of testing, thanks to improperly installed fasteners. Two small pieces of that hardware remain in the spacecraft, and must be located and removed.

“The success of implementing the recommended corrective actions for the human errors and embedded problem factors will determine the success of completing the JWST development,” Young said.

Young noted that the launch date of March 30, 2021 was contingent on NASA following the IRB recommendations, and did not include room or time for additional delays. Young estimated that there is about an 80 percent likelihood that the mission will launch by that date.

“Webb is vital to the next generation of research beyond NASA’s Hubble Space Telescope. It’s going to do amazing things—things we’ve never been able to do before—as we peer into other galaxies and see light from the very dawn of time,” Bridenstine said. “Despite major challenges, the board and NASA unanimously agree that Webb will achieve mission success with the implementation of the board’s recommendations, many of which already are underway.”

The telescope weighs 13,688 pounds and (if it ever launches) will station itself in a stable orbit 1 million miles away from Earth. Its primary mirror is over 21 feet across, divided into 18 hexagonal segments. It is designed to look at the stars and galaxies that were formed soon after the Big Bang, examine the development of stars, planetary systems, and galaxies, and analyze the atmospheres of planets both inside and outside our solar system. Just a few days ago NASA announced that the JWST would study Jupiter’s Great Red Spot, looking for clues as to the nature of the centuries-old storm on the largest planet in the solar system.

With today’s announcement, those plans will now have to wait at least another year.