Planetariums seem old-school, but they have a surprisingly lively future

Museums are looking to the past for inspiration. 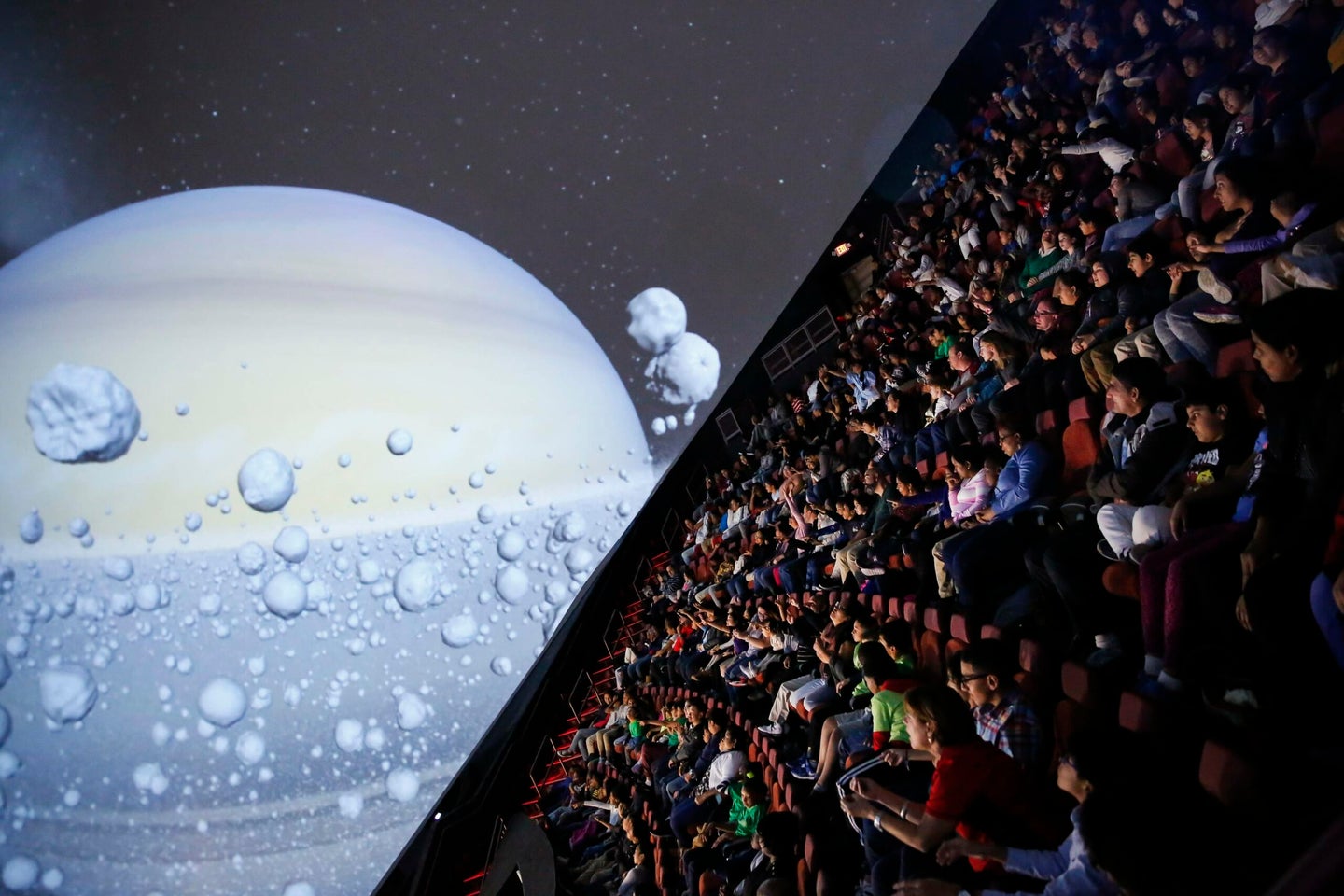 It felt like being on a third grade field trip again—in a good way. I was dwarfed by the perforated aluminum dome of the new Jennifer Chalsty Planetarium at the Liberty Science Center, just across the river from Manhattan.

Reaching 60 feet from the floor to the top of the dome, and with a diameter of 89 feet, the recently opened planetarium is the largest in the Western Hemisphere, beaten only by rivals in China and Japan.

“When it comes to planetariums, size matters. It matters because the experience is more immersive, and simulates what it might be like in the night sky, in, say, Wyoming where you don’t have buildings blocking the horizon,” says Paul Hoffman, CEO of the Liberty Science Center. “More importantly, it allows you to show many more objects in incredible resolution.”

At this planetarium, images from observatories all over the world (and even space telescopes, rovers, and probes) are shown in 8K resolution, on a system that can display trillions of colors—more than our human eyes can see. But with high-resolution screens appearing everywhere from our living rooms to our pockets, and images from NASA freely available online, who even needs a new planetarium?

“Everything we do here has to be completely amazing and awesome, but first and foremost you have to be transported out of your everyday experience,” Hoffman says. The planetarium is designed to immerse people in the night sky, which can be elusive as light pollution rises.

Where did planetariums come from?

That’s how some of the earliest planetariums started in the early 1900’s. “When the Adler planetarium opened in 1930, the night sky wasn’t as accessible to people as it was in previous generations,” says Andrew Johnston, the Vice President for Astronomy and Collections at the oldest planetarium in the Americas, the Adler Planetarium in Chicago.

Back then it was gaslights and early electric lights that were causing all the light pollution, not LED’s, neon, and the plethora of bulbs that light up the sky today. Planetariums offered city-dwellers a glimpse of the sky for decades. Then the space race started, with a beep from a passing USSR satellite. Suddenly, planetariums started popping up in schools as education’s focus shifted toward emphasizing science and math—the better to compete in the cold war.

Planetariums kept an interest in space alive even as time went on and space programs had to tighten their financial belts, but often added digital projectors, IMAX film equipment, and other variations to their optical projectors, or tore them out entirely.

Still these domes endured, even if they were occasionally forgotten in parts of the science museum, or drowned out by IMAX shows, offering people a perspective of where they stood in the vast reaches of space.

“There’s lots of space out there,” Johnston says. “When you can show someone that we’re in this part of the galaxy, it gets people thinking about the whole structure of the universe and their place in it.”

If you want to see the future of planetariums, you might want to take a closer look at the past. In the early days of star-projector planetariums a live presenter would take visitors on a journey to the night sky. But as technology changed, planetarium offerings changed, too. Slides came into vogue, and with the complicated mechanics of the system, having a live presenter became nearly impossible.

“In the ’80s, when I was getting started, there was a trend towards recorded shows,” says Jennifer Chalsty Planetarium director Mike Shanahan. “It was an odd format, a slide projector clunking along and then a recorded narration. But there were a few of us that kept the flame of live presentations going.”

Shanahan recently moved to take the post at LSC from Hawaii, where he was the director of the Bishop Museum Planetarium. There, in addition to seeing the night sky, visitors were thrilled to see snow projected on the big screen. The planetarium’s facilities were also used by the Polynesian Voyaging Society to study traditional wayfinding across the oceans. At Liberty Science Center, Shanahan plans to meet the needs of a new audience.

There will be some recorded shows, but the highlight of the planetarium will be a 45-minute live presentation called Wonders of the Night Sky. Presenters will be able to tailor each performance to their audience (7 year olds and 70 year olds might have different interests or levels of understanding) and will be able to update scripts swiftly with new research.

Shanahan plans to have the shows updated as news comes in, allowing visitors to hear about astronomical discoveries as they happen, and even speak to the researchers making the discoveries via a teleconference projected onto the dome. It’s more expensive than a recorded show, but also offers more flexibility.

“At the end of the day, people want to see what’s in the night sky, but they also want to see the data coming in from NASA and other space agencies as well,” Shanahan says. “People in this country grow up liking astronomy. You’ve half won them over before they sit down.”

I sat down in the middle of the theater. I watched as constellations outlined themselves on the night sky, flew across Central Park, and through the Orion Nebula. Then I went on a roller coaster ride of a Möbius strip that was more intense than some theme-park attractions.

“We do give people the advice that if you get overwhelmed, you can close your eyes and look down,” Shanahan tells me, as we continue to follow along the shape with only one side as it spins in front of us (they added this simulation in part for mathematicians, who rarely get a space of their own at a science museum). “The kids start cheering at this part,” he explains as the strip accelerates—or am I the one accelerating?—”The kids are like, ‘again, again, encore.’ Watching it on the TV screen is just not the same.”