Black holes are full of conundrums. Like, what would happen if you threw a book inside one of these gravity wells? The theory of general relativity (the physics laws that govern really big things in the universe) predicts that the book would disappear forever. But quantum mechanics (the laws that govern really small things) says that’s impossible–that energy, matter, and information can neither be created nor destroyed. They can get transformed, but the total amount has to stay the same.

To try to solve this paradox, a team of physicists has come up with a way that someone could theoretically recover information from a black hole. There’s a catch though: the experiment only works on one bit of quantum information (or qubit) at a time. That’s not a lot of information.

Although the study hasn’t been peer-reviewed yet, it is posted on arXiv so the researchers could collect feedback from their colleagues before submitting it to a journal. It’s also not the kind of experiment scientists are likely to try out–it’s just meant to be a fun thought experiment. “In essence, our protocol amounts to a teleportation scheme,” they write.

Here’s how it works.

“In essence, our protocol amounts to a teleportation scheme.”

Let’s pretend Alice is just casually hanging out near a black hole, measuring its properties, when all of a sudden—oops!—she drops an electron into the black hole. That electron was originally spinning in a specific direction–say either up or down–and Alice wants to find out which. Is that information, its spin state, lost forever? No, says Aidan Chatwin-Davies, a grad student at Caltech. According to his team’s paper, Alice needs to collect some Hawking radiation in order to find out the electron’s spin state.

Hawking radiation is thermal radiation that scientists think might leak out of black holes. Although nothing can escape a black hole, that does not prevent a black hole from emitting radiation. Physics theory suggests that if you stopped feeding a black hole, it would eventually shrink and vanish because it loses mass through this type of radiation. Stephen Hawking originally posited that this radiation would contain no information–just heat–but the majority of scientists, including Hawking himself, no longer think that.

“A prevailing opinion is that Hawking radiation isn’t totally thermal,” says Chatwin-Davies. It might contain some information, “so if you examined it, you’d be able to reconstruct whatever you tossed into the black hole.”

The black hole is constantly generating Hawking radiation. But the interesting thing here is that, according to theory, for every Hawking particle that leaves the black hole, another version of that particle falls into the black hole. The two particles exist on separate sides of the black hole’s event horizon, or boundary. They are physically separated, but their properties are linked, or entangled. No matter how far apart they are, their properties will always be opposite. So if the Hawking particle on the outside spins up, for example, then the particle on the inside will spin down, and vice versa.

Although nothing can escape a black hole, that does not prevent a black hole from emitting radiation.

So she collects one Hawking particle. She also measures the black hole again. She can measure its charge, mass, and spin, which would have changed slightly when the electron and the Hawking radiation particle fell in.

Voila! The total information in the universe is conserved. That wasn’t so hard, right? 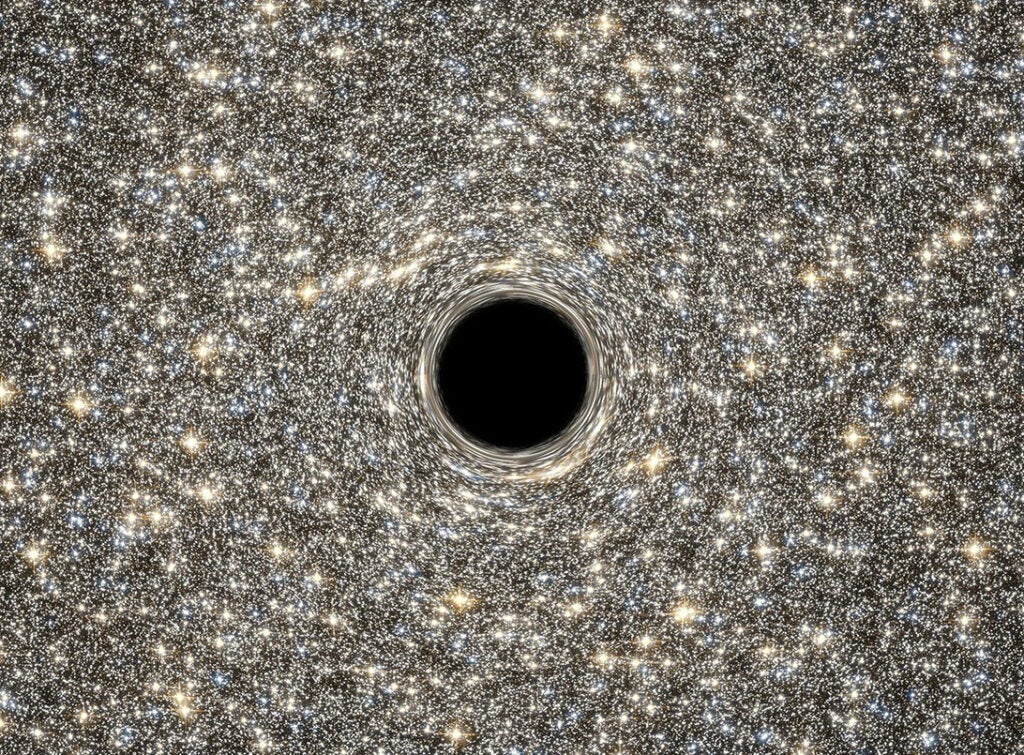 Artist’s illustration of a black hole inside the dwarf galaxy M60-UCD1.

This isn’t the first technique scientists have proposed to extract information from a black hole, and it certainly won’t be the last.

This particular method only works for one bit of quantum information at a time—so just one particle’s spin or polarization, for instance. If Alice threw in two or three particles, or tried to measure more than one property at the same time, it wouldn’t work. But she could measure one first and then the other.

The idea also doesn’t work if the black hole has a firewall—a theoretical wall that burns up anything that crosses into the black hole. If the firewall exists, it would be impossible for the Hawking radiation particles to carry much useful information.

As for figuring out what would happen if you yourself fell into a black hole, Chatwin-Davies says this protocol doesn’t really help with that. Luckily, we’ve got you covered. Check out our article, “How It Works: Death By Black Hole.”