I (Sort of) Hosted A Show with President Obama!

Since starting this blog almost five and a half years ago, Vintage Space, this and my YouTube channel, have been... 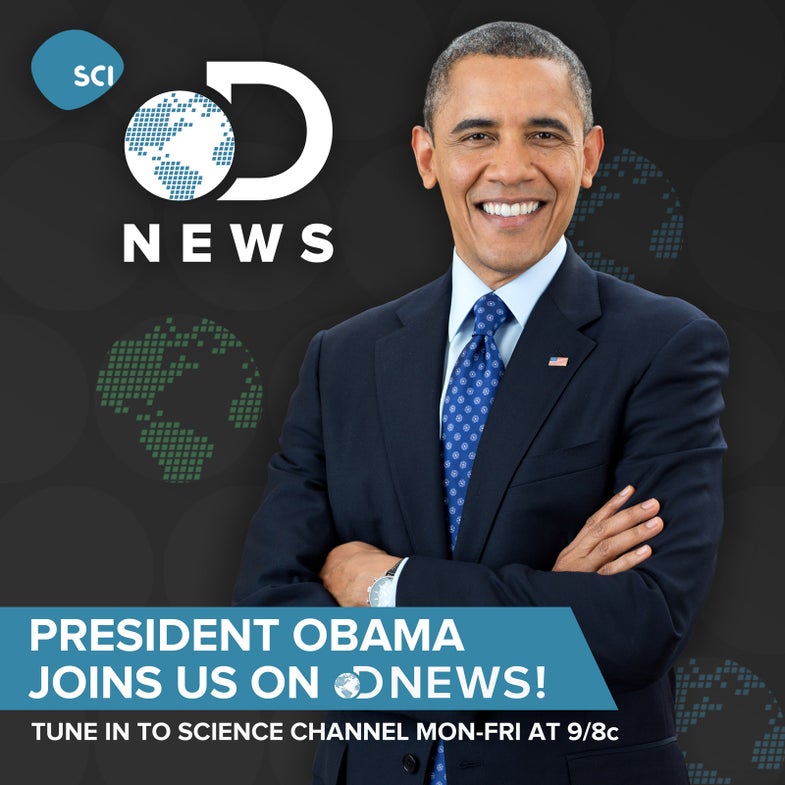 Since starting this blog almost five and a half years ago, Vintage Space, this and my YouTube channel, have been my baby, my little corner of the Internet where I get to engage in all my space history nerdery. And most of you guys know that I do all kinds of nerdery, space and non-space, on DNews, Discovery Channel’s daily science news show.

I’ve been with DNews going on two years now and I love the weird variety of topics I get to cover. No other job would let me dive into parasitic twins and chimerism, menstrual synchrony, midnight panic attacks, and premenstrual breast tenderness. And it’s awesome to see the show grow so much since I started. Our audience keeps getting bigger, we’ve started doing occasional field shoots for DNews Labs, and we bring in guest hosts every once in a while.

We even got picked up on the Science Channel! Since December, my dear friend and co-host Trace Dominguez and I have been hosting 30-second DNews episodes airing on the Science Channel (and a few other places) every night at 9pm. They’re shorter and less in-depth than our regular episodes, but cramming accessible science into a 27-second video has been a fun challenge for our whole team! And because it’s broadcast and we need to look polished and different every episode, we do a lot of wardrobe changes. Our sessions are a fast-talkin’, shirt-changin’ good time!

And I’m so excited about this week’s guest host that I had to deviate from space history just this once to tell you guys that President Barack Obama is on DNews this week! Yup. The President of the United States! Obama is hosting DNews on Sci all this week! Sadly he didn’t come into our studio to record on our set with our awesome crew, so I didn’t get to meet him, but it’s still awesome. And I can now say that I’ve been on the same show as President Obama! The whole DNews team is kind of really excited…

So check out DNews on Science Channel every night this week at 9pm to see what the President has to say about some of the neatest recent science advances! And also be sure to hop over to DNews’s channel this week to see Obama hosting our little science show! And of course, you can find me and Trace talking all kinds of science on DNews all the time. We have a lot of fun bringing science to the humans. And I especially love when it’s an episode that gets me as excited about space as Vintage Space does! Trace and I talked about Planet Nine. We had too much fun writing this one!