Why Did The Air Force Play With Cats In Space?

Plus, 9 simple ways to move in zero gravity 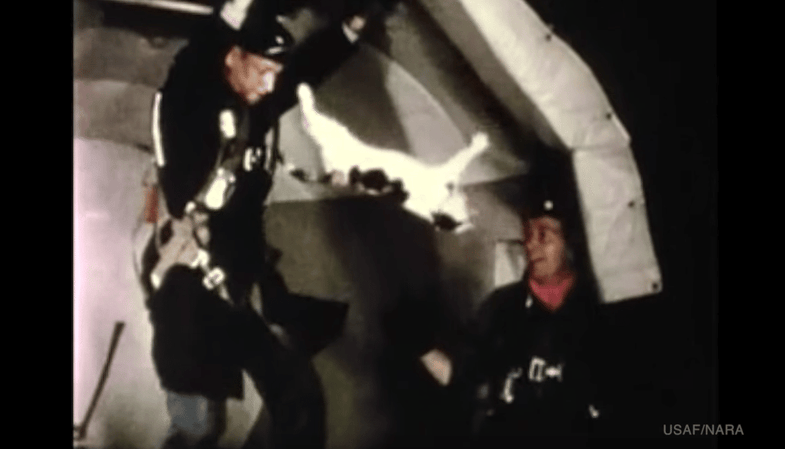 In 1947, the Air Force played with kittens in microgravity. In October of 1962, the same lab published a report titled “Weightless Man: Self-Rotation Techniques.” Among other research, it took lessons learned from watching cats flailing in microgravity and applied it to humans, setting out guidelines for how future astronauts might move in space.

The adorable but still scientific experiment came from the Behavioral Sciences Laboratory within the Aerospace Medical Research Laboratories at Wright-Patterson Air Force Base in Ohio. Specifically, it was under the banner of Project No. 7184, “Human Performance in Advanced Systems.”

At the time, the imminence of men flying in space had flight surgeons wondering about how a man would handle weightlessness. No one was entirely sure what would happen to the human body without gravity. His eyeballs might distort, rendering him nearly blind in the cockpit of a spacecraft. He might not be able to eat or drink. The fluid in his inner ear responsible for balance on Earth might slosh around or pool up leaving him badly disoriented and nauseous.

But it wasn’t just physical problems that had flight surgeons worried. Another big question was simply whether or not a man could move in space. It was clear that to work effectively in space, an astronaut would have to be able to keep himself stable and control both his orientation and his movements with respect to the spacecraft he’s inside. If he couldn’t, he’d be a pretty useless worker.

Knowing astronauts might be working in large areas with little at their disposal to push off from to move around, the Air Force looked at what an astronaut would always have on hand: his own body. If he could learn to harness his own movements to gain inertial momentum to move around, he would be a much more effective astronaut.

To this end, the October 1962 report from Wright-Patterson looked at a man as a series of cylinders, each of which could be used as a “motor” for self-rotation either on its own or as part of a larger group. There was one cylinder for the head, one for the torso, and one for each arm and leg. So basically from the Air Force’s standpoint, an astronaut became little more than a series of flailing pieces, one of those pieces capable of effecting a small movement while two or more could effect a larger movement. Every combination of “motors” was a little different owing to the change in centre of gravity adding angular momentum to the movement.

The report described nine specific movements with step by step instructions, determining that moving in weightlessness is nothing more than a delicate balance of managing movements. Done properly, an astronaut could twist and move a set distance, not flail. And his control would only increase with slight variations to these nine movements.

I was working on this blog post in an airport during a flight delay, reading through the actual descriptions, and got to “Pinwheel” before I started laughing hard enough to awkwardly draw attention to myself. And so, here are the nine specific movements as outlined by the Air Force.

The first movement around the Z axis is called the Cat Reflex, and takes its inspiration from a cat’s instinctive rotation to land with its feet down. Start with your body straight, arms down, and legs spread. Twist from the waist, and keep that twist as you extend the arms out to the sides. Bring your legs together and untwist the torso. You should end up with your body straight, but having rotated. By repeating this movement multiple times you can rotate as much as needed.

The Bend and Twist is the second Z axis manoeuvre. Again, start with the body straight and the arms down by your sides. Then, bend at the waist sideways and extend the arms upwards. Next, the whole upper body rotates: the arms go from one side to the other around the front while the back stays horizontal. Then the arms are drawn back in so they’re parallel to the torso, which reduces rotation, before the torso is brought back into the starting upright position.

The Lasso is the third Z axis manoeuvre, classified as a continuous rotary motion since the arms don’t stop moving until you get where you’re trying to go. Keeping the body straight, raise your arms overhead and make identical circles with your hands, essentially tracing out two identical cones with your arms. The challenge here is symmetry; if one arm traces a larger circle than the other you risk introducing another motion in the exercise. But the tradeoff is it’s an easy movement with a big effect. The single arm variation also works, and adds to that cowboy feeling.

The last Z axis manoeuvre described in the report is the Pinwheel. Another continuous rotary motion, this one demands continual torque at the waist. Starting with the body straight, trace identical cones spinning in the same direction with the upper and lower body while maintaining the waist’s position as the apex of both cones. This one is tough because it’s extremely hard to maintain symmetry; very few people can bend as far backwards as they can forwards to keep the cones even. The flip side is that the Pinwheel generates a lot more inertial force than the Lasso alone.

The first X axis manoeuvre is called the Signal Flag. It’s another continuous rotary motion, but far simpler. Tuck your legs up to your stomach, then raise one arm overhead while keeping the other down the length of your torso. In one fluid movement, rotate the raised arm out and down and the lowered arm out and up, effectively tracing out a circle to spin you around cartwheel-style.

The second X axis manoeuvre is the Reach and Turn. Starting with the body straight, raise both arms up above your head. Then bend from the waist over to one side. While bent sideways, tuck the knees into the stomach, and keep them tucked while you move the arms up and over all the way to the other side. Bring the arms back down to the sides then straighten the legs to stop your momentum. The report stresses the need to follow these steps exactly. If you tuck or untuck your legs at the wrong time, you could introduce some unwanted motions into the manoeuvre.

The third X axis manoeuvre is a version of the Z axis Bend and Twist (it’s also the most confusing). With the body straight, raise the arms parallel to the Z-axis and tuck the legs up at the same time. Bend the upper body sideways, then extend the legs without moving the arms. From here, rotate the whole torso around to the other side keeping the back straight. Draw the legs back up into the tuck, then rotation the torso back to its starting position. Repeating these complex steps, which the report stresses must be done in order, leads to dual motion around the X and Z axis simultaneously.

The first Y axis movement is the double pinwheel. Simple tuck your legs into your stomach, extend both arms out to the side, and move them in circles. It takes a lot of arm motion to put the whole body through a somersault-like movement, but it’s one of the easier and most symmetrical motions.

The last movement in the report is the Touch the Toes. Starting with the body straight again, tuck the legs into the stomach. Maintaining the bend at the waist, extend both legs out to the front. Keeping the legs out, bend forwards and extend the arms like you’re trying to touch your toes. From this piked position, move the legs back to their straight starting position, then straighten up the upper body.

These nine self-rotation manoeuvres are offered as a starting point for developing and classifying more efficient ways an astronaut can truly become “rotationally self-sufficient in a frictionless” weightless environment. The report stresses that some kinds of self-rotation training will be a necessity for astronauts, potentially going as far as classes in self-rotation techniques run in zero-G aircraft.

Astronauts did, and still do, train in zero gravity inside an empty airplane flying parabolas to give them short bursts of weightlessness. But the report also acknowledges that humans can adapt to new environments very easily, and this natural ability to adapt seems far more important when discussing microgravity. I can dig some more, but I have yet to find any footage of astronauts on board a spacecraft actually using any specific series of movements to get himself from point A to point B.

Sources: Weightless Man: Self-Rotation Techniques. ; music in that video is “Bicycle Sex” by Robin Vining and you can get the full album here.