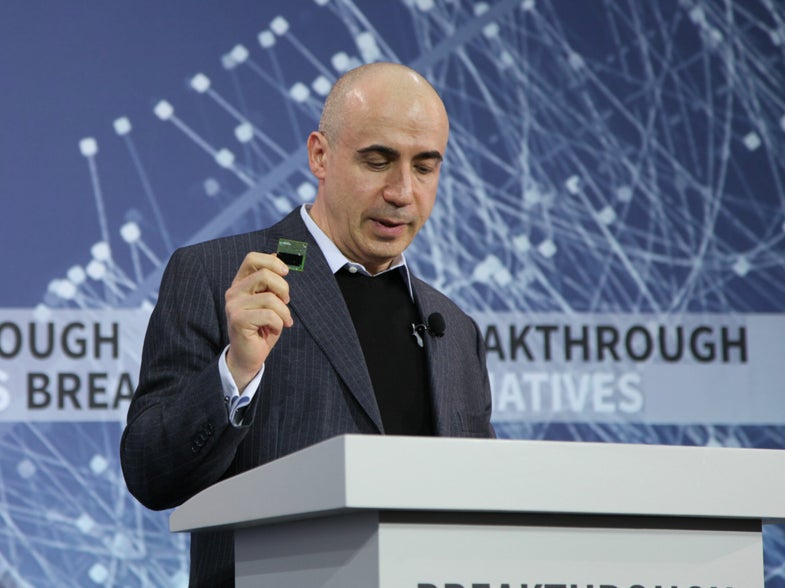 Yuri Milner waves around the small system that would form the basis of his interstellar nanocraft. Sarah Fecht/Popular Science
SHARE

To catch the elevator up to the Observatory deck of the One World Trade Center, you start in a tunnel carved through NYC’s bedrock. Papered in LED screens, the elevator car displays the same cave-like visuals as the real bedrock. As you proceed upward, the screens change until you are floating in the clouds, looking at the shrunken city below you. On my way up, I couldn’t help but imagine what the view would look like if the elevator could keep going, into space and another star system.

I was on my way to attend Yuri Milner’s announcement of a real-life project that would visit and send back photos of another star system–which, crazy as it sounds, isn’t nearly as ridiculous as my interstellar space elevator imaginings.

Milner is fronting $100 million toward a project that would launch hundreds or thousands of tiny satellites into orbit, then use a laser to push them to Alpha Centauri, the next star over. Traveling at 20 percent of the speed of light, these craft would reach Alpha Centauri approximately 20 years after they leave Earth, and they’d beam back photos and data from humankind’s first foray to another star.

“We can do more than just gaze at the stars, we can actually reach them,” said Hawking.

Except that we can’t–not quite yet anyway. While advances in microfabrication, nanotechnology, and photonics have made this project potentially feasible, there’s still a lot of work to be done. It’s going to take a lot more than Milner’s $100 million investment. He thinks the ultimate costs could tally up to be on the level of CERN. So, billions of dollars.

According to Phil Lubin, the man who actually came up with the idea of tiny, laser-propelled spacecraft for interstellar travel and submitted it to Milner’s Breakthrough Initiative a few months ago, the biggest challenge will be in building the laser. The project lives or dies based on whether the team can build a huge array of lasers that focus into one powerful, 100 GW beam.

“We’ve never phased up an array of that size,” Lubin told Popular Science. “There’s no reason it shouldn’t work, but there’s a lot of reasons it could be difficult to make it work, including mundane things like phase variations in the fibers due to temperature fluctuations, small microphonic variations in the structure.… All kinds of really nasty technical problems. That’s not going to be easy to solve.”

Other problems, such as miniaturizing of the spacecraft and creating a solar sail that is thin enough to be lightweight but strong enough to withstand the interstellar environment, could also prove to be challenging.

That said, there are no showstoppers yet. And though there is a lot of work and plenty of uncertainty ahead, the ultimate goal is to make history, scope out the prospects for life in other solar systems, and to pave the way for humanity to expand beyond the constraints of our own solar system. Who knows what we might find out there?

“I look out my window at my backyard every day and it looks the same,” says Loeb, “but when I walk through it, I see new things.”