With a temperature around 3,000°F, this Hot Jupiter is even toastier than other planets of its kind. 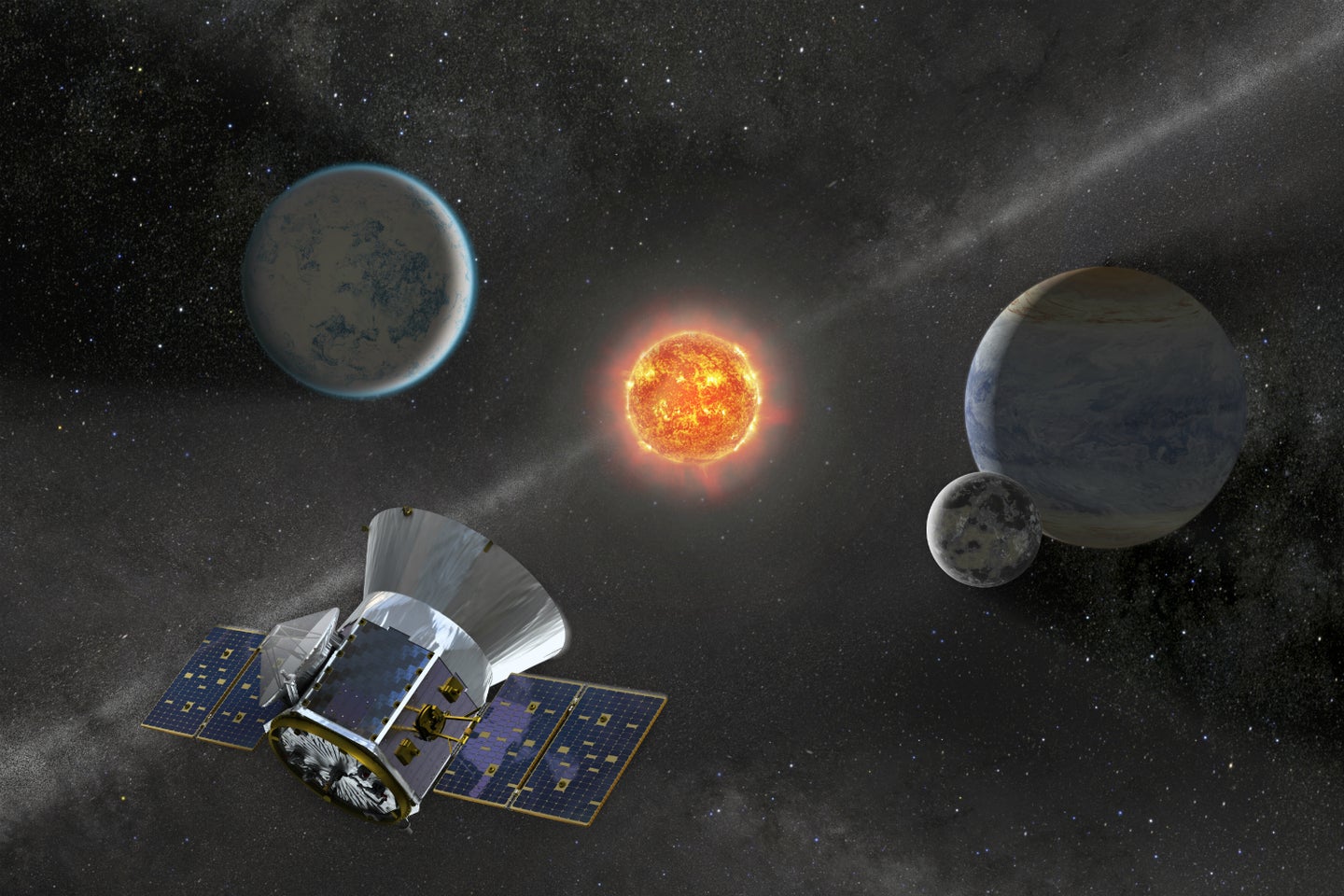 NASA's Transiting Exoplanet Survey Satellite is one way for astronomers to investigate exoplanets such as HD 167768 b. NASA
SHARE

In the past few decades, astronomers have discovered thousands of exoplanets around other stars. Many of those worlds look nothing like the planets in our own solar system. One curious type of exoplanet is the Hot Jupiter, a planet similar in size to our own Jupiter–but, unlike our neighborhood gas giant, these are extremely close to their home stars.

A team of Japanese astronomers recently discovered one of the hottest Jupiters to date, around a star known as HD 167768, as part of their long-running Okayama Planet Search Program that began in 2001. To make the situation even weirder, this planet is around an old, dying star—a place no one would have expected a planet to survive.

Huanyu Teng, astronomer at the Tokyo Institute of Technology and lead author of this discovery, considers this planet “a relatively lucky find” and “a rare case.”

This new planet, named HD 167768 b, is so close to its parent star that one year there is only 20 Earth days long. This planet is technically considered a warm Jupiter, since Hot Jupiters are defined as having a year shorter than 10 Earth days. But HD 167768 b is a whopping 3,000°F, about the temperature of a jet engine, which is hotter than nearly all other known Hot Jupiters, the study authors say.

Although it takes a little longer than typical for this Hot Jupiter to complete a circle around its sun, this star has inflated, shortening the distance from its blazing surface to the planet. If most Hot Jupiters orbited stars the size of M&Ms, HD 167768 b’s star is something like a golf ball. The distance between the gas planet and its sun is one-and-a-half times the star’s diameter—for context, you could fit almost 108 of our sun’s lengths within Earth’s orbit.

[Related: A deep-space telescope spied an exoplanet so hot it can vaporize iron]

Teng and co-authors published the discovery in November 2022 as what’s called a preprint paper, a way for scientists to share work before the expert review required for publication in a journal. In this case, the Hot Jupiter study has been accepted in the Publications of the Astronomical Society of Japan.

Astronomers previously thought the aging process of a star would be “fatal to close-orbiting exoplanets” like HD 167768 b, says University of Kansas astronomer Jonathan Brande, who wasn’t involved in the new report. As stars run out of the fuel that sustains their nuclear fusion, they puff up, expanding their outer layers and often engulfing the closest planets—or so astronomers think. There are still many outstanding questions about what happens at the end of a solar system’s life, including whether planets survive or change as their stars die.

“There have been tens of planets discovered around evolved giant stars, but almost all of these planets are at large distances from their host stars,” says Aurora Kesseli, research scientist at the NASA Exoplanet Science Institute. HD 167768 b “helps to answer some of these questions about what happens to planets when their host stars become giants.”

[Related: Newly discovered exoplanet may be a ‘Super Earth’ covered in water]

There are other curiosities about HD 167768 b, too—it’s in a strange part of the galaxy for a planet to exist. Our Milky Way is shaped like a crepe stuffed within a fluffy pancake, where the crepe is known as the thin disk and the pancake is the thick disk. The stars in the thick disk tend to be much older, and are thought to be less favorable environments for planets to grow up around. We’re in the thin disk–but HD 167768 b was found in the thicker one.

This curious world also shows signs that it’s not alone. HD 167768 b was discovered via the tried-and-true radial velocity method, where astronomers measure the movement of a star to infer hidden planets. The team noticed two more possible planet signals in the data, hinting at neighboring planets orbiting a bit further away from the star—they would have years 41 and 95 Earth-days long. To find out if these neighbors are real, astronomers will need to take a closer look at this system, such as with the Transiting Exoplanet Survey Satellite (TESS). Further observations of the new planet will allow astronomers to dig deeper into questions about old planets, now that they have this excellent specimen to analyze.

We don’t have forever to watch HD 167768 b, though. Teng and collaborators calculate that this planet will only exist for 150 million more years—an absolute blink of the eye for the timescales of the universe. (Earth, meanwhile, should stick around for at least another 5 billion years.) This is an exciting opportunity to see a planet so close to the end of its existence.

“Cosmically, this is just about the last possible time we’ll be able to study the planet,” says Brande. “As the host star is continuing to expand, eventually it will totally eat this planet for dinner.”