The origin of radio bursts like this one remain a vexing astronomical mystery. 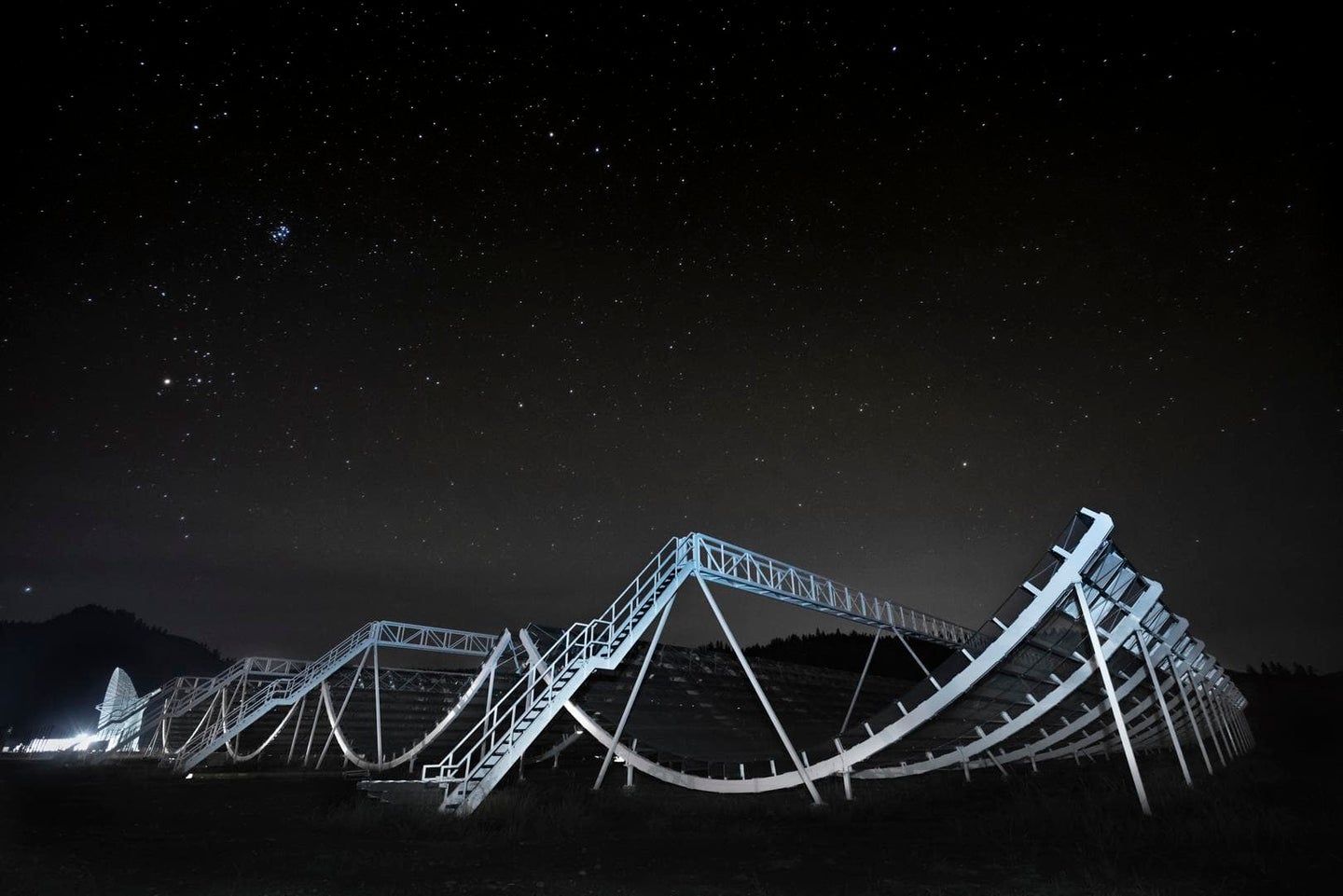 There are strange radio signals that ping us here on Earth. It’s possible to sense them thousands of times every day, if astronomers know where to find them.

These most likely aren’t aliens’ attempts to contact us. Astronomers call them fast radio bursts (FRBs), and they’re some of today’s most vexing space mysteries. We’re starting to get a picture of where they might come from, but we’re not certain what exactly causes them.

Astronomers are working on that. Researchers from Nanjing University and Hong Kong University have modelled what might be shaping one of them, in a paper published in Nature Communications on September 21, studying the rapidly repeating burst named FRB 20201124A.

Fast radio bursts are brief: Most last a second or two, or even less. They are bursts: When they’re created, they’re thought to be as energetic as our sun. That said, by the time the signals reach us, they’ve generally far weaker than our terrestrial radio waves—which partly explains why they’ve taken so long to find.

Astronomers have been observing these little blips in their radio telescopes for more than a decade. In 2007, astronomers combing through six-year-old data found a short, brief pulse from an unknown origin. It was the first of hundreds, so far.

Signals from the unknown

What causes FRBs, if they have a single explanation at all, remains murky. Astrophysicists have suggested links to black holes, neutron stars, gamma ray bursts, supernovae, and all sorts of other distant phenomena (yes, even aliens).

One popular culprit is a magnetar: a certain type of high-energy neutron star with an extremely strong magnetic field, as much as a trillion times the strength of Earth’s. In 2020, astronomers spotted an FRB emanating from a magnetar in our own galaxy.

[Related: Astronomers caught a potent radio burst blasting at us from a dwarf galaxy 3 billion light-years away]

Even then, what exactly makes a magnetar generate an FRB isn’t known. Some astronomers suspect it’s to do with how magnetars spin, which could create the predictable beats of certain FRBs—somewhat like the clockwork-precise timings of a rotating pulsar. Astronomers call this attribute “periodicity.” Yet, in many cases, there’s no evidence of it. (Another theory is that some FRBs come from discs of gas and dust that build up around black holes.)

Making matters more complex is that every one of those hundreds of FRBs is a different beast. Some flash once, never to be seen again. Some flash a few times. Some stay silent for days, then light up randomly for a short period, then go silent again. And some flash dozens hundreds of times in rapid succession. FRB 20201124A is firmly in the latter category.

Astronomers first saw it in November 2020 (hence the numbering of its name). They caught a glimpse of its chimes with, well, CHIME—a radio telescope in British Columbia that’s now tasked with scouring for FRBs’ fingerprints. Every day, CHIME sweeps across the sky, pausing in a spot for a few minutes at a time. It was during one of those pauses that the scope found FRB 20201124A.

At first, it seemed like just another FRB. “We didn’t announce it right away,” says Adam Lanman, a postdoctoral astrophysicist at McGill University who was involved with the CHIME finding. That would soon change.

In April 2021, CHIME spotted FRB 20201124A metaphorically lighting up, sending out repeating pulses. CHIME’s astronomers alerted the world’s astronomy community. “Following that, a bunch of other observatories started seeing a lot of events from it,” says Lanman.

[Related: Astronomers just made one giant leap in solving a bizarre cosmic mystery]

One of those observatories was FAST: the world’s largest radio telescope, nestled in the mountains of Guizhou province in southwestern China. In another paper published in Nature on the same day, scientists using FAST reported seeing nearly 2,000 more blasts from FRB 20201124A before the source went silent again.

“This large sample can help us to shed light on the origins of FRBs,” says Wang Fayin, an astrophysicist at Nanjing University.

Repeating FRBs aren’t new, but FAST’s observations saw a number of unique fingerprints in the radio waves that suggested something was playing with them. “There are some unique characteristics of FRB 20201124A, which motivates us to create a model for it,” says Wang.

Wang and his colleagues tried their hand at a model. Theirs suggests that FRB 20201124A does hail from a magnetar—but not a magnetar alone. As radio waves burst from the magnetar, they pass through the skirt of the star that the magnetar orbits. It’s a particular kind of star called a Be star, a very bright star shrouded within a disc of plasma and gas. The radio waves from an FRB would pass through that disc, explaining their unique characters.

“All completely speculative, but none of it’s impossible,” says Jonathan Katz, astrophysicist at Washington University in St Louis, who wasn’t an author.

“I haven’t seen any other papers that go into quite as much detail as this,” says Lanman, who also wasn’t an author.

But this model isn’t a perfect fit to the FAST data—there’s a fair bit of variation it doesn’t fully explain. “Whatever is going on, it might have their model at the core, but there’s a lot more going on than that,” says Katz.

Modelling FRBs in this way isn’t isn’t new. Astronomers have often thought that repeating FRBs are thanks to a neutron star or black hole orbiting another star. On the other hand, it’s not yet clear how, exactly, FRB 20201124A repeats. Katz says outside groups haven’t yet been able to scour the FAST data for evidence of periodicity.

Still, if it’s a magnetar orbiting another star that astronomers are looking for, then they also know where to find it. The same observations that produced the model have helped narrow down FRB 20201124A’s source to a particular galaxy, which can help astronomers find it later. They might do that by searching in other wavelengths: X-rays, for instance, or gamma rays.

Astronomers have tried to scour that galaxy with X-rays before. But the model might help them narrow their search attempts, and that’s what Lanman recommends after this work: “Certainly, further searches for X-ray counterparts going forward” are in order, says Lanman.