The origin of brief and super-energetic radio waves remains unknown. 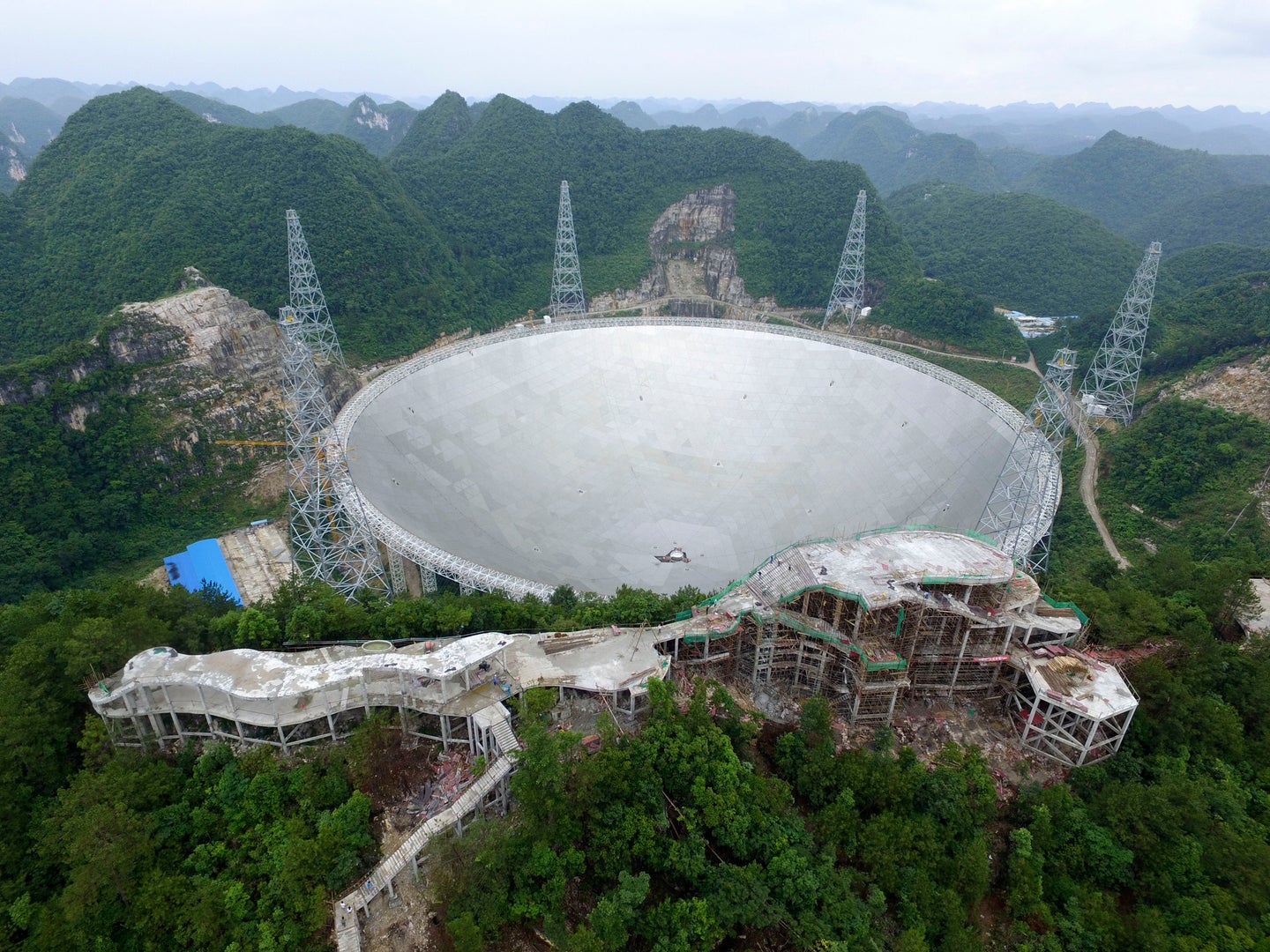 Emanating from deep in space, massive explosions show up in astronomers’ data as a quick surge of radio waves. Fast radio bursts (FRBs), as they’re called, can carry as much energy in a single pulse as our sun emits in 100 years. But, because the bursts often last just a few thousandths of a second, radio astronomers typically have insufficient context to make sense of these dramatic cosmic events or determine where exactly the flashes originated. As such, FRBs have been one of astronomy’s great mysteries.

Scientists don’t know a lot about what causes these violent eruptions of radio waves. Some theorists posit that the explosions emanate from the collision of extremely dense objects like black holes or neutron stars. Others suggest FRBs come from the collapse of distant stars.

Now, astronomers are accruing the evidence they need to put the pieces of the FRB puzzle together—a newly spotted burst has two key attributes that might help astronomers take a more sustained look at these enigmatic explosions.

The latest FRB detection comes from the Five-hundred-meter Aperture Spherical radio Telescope (FAST) in Guizhou, China. But this explosion was more than just one flash in astronomers’ data. It repeats at regular intervals, so researchers were able to locate it in follow-up observations at telescopes around the world. Described in a paper published in the journal Nature this week, FRB 20190520B is also associated with a persistent source of radio emissions between those bursts. The source sits at the edge of a dwarf galaxy roughly 3 billion light-years from Earth.

To make sense of FRBs, researchers have been searching for events like this one—that repeat. “The key question for everybody is its origin story,” says study author Di Li, the chief scientist of the FAST telescope who leads the radio division of ​​the National Astronomical Observatories of the Chinese Academy of Sciences. “We really want to know what kind of astronomical object or what kind of physics may produce such a bright thing.”

The vast majority of FRBs that astronomers have detected since they were first discovered in 2007 have been distinct, individual events. Of more than 500 bursts that have been spotted, only about 5 percent repeat.

The majority that don’t repeat pose an added challenge for follow-up study. “Although they are very bright, they are a one-off event,” Li says. “By the time you dig it out of the data, it could be the next day or even the next month. And then you just cannot go back … you cannot catch this cosmic explosion in the act.”

A single-time event is intriguing. But repetition is where researchers begin to puzzle out patterns for a deeper understanding of phenomena.

That’s why the latest FSB discovery offers a chance for researchers to put together the pieces of this bursting puzzle. This is only the second time that a repeating FSB has been detected with a persistent source of weaker radio waves between the pulses, following one that was initially spotted in 2012. Other repeaters have been detected since then, but no others have been associated with a persistent radio source, which offers astronomers more texture to study.

“The first only poses more questions. It’s the second, and third, and fourth that help us get the answers to that question,” says Navin Sridhar, an astrophysics PhD candidate at Columbia University who studies FRBs and conducts simulations to determine the physics of such phenomena. He was not involved in the new study. “These are an extremely new class of events, and every single additional source and data point is just golden.”

Scientists are trying to sort out what engine drives these violent explosions–and just how many different things might cause FRBs. Part of that endeavor is identifying where in the cosmos the bursts originate, but researchers are also grouping the phenomena into different classes. Right now, they’re largely separated into repeaters and non-repeaters. The association of the persistent radio emission adds another wrinkle.

With this new detection, “we can say confidently that [the FRB discovered in 2012] is not an outlier,” Sridhar says. But the parallel FRBs might represent an entire, distinct category of explosions. “So we cannot really put all FRBs into one basket and say, ‘Okay, all FRBs behave this way.’ This indicates the birth of a new class of FRBs.”

Perhaps there might be another explanation, Li suggests. These two repeaters might be younger FRBs, he says. The idea centers around what you would expect to see right after an explosion. The debris doesn’t immediately dissipate. It takes a little while for that material to expand out into the cosmos. If astronomers spot the bursts early on, that denser cloud of ejecta could be the source of those persistent radio emissions. That would also explain why it’s so active, Li says.

Although the new FRB detection has key similarities to the first repeating FRB detected in 2012, it is not precisely the same, Sridhar says. Furthermore, he says, that theory about these bursts being particularly young relies on assumptions about what is driving them. If a magnetar (a neutron star with an extremely strong magnetic field) is responsible, he says, that would make sense. But if the source was, say, a class of blackhole binaries that accrete matter from nearby stars, it could also reveal this radio signature—and it would get stronger over time.

“We really need to know what the environment of a FRB is in order to pin down the engine that is powering it,” Sridhar says.

After all, explosions of radio waves aren’t rare. Scientists have calculated that hundreds of FRBs occur every day in the universe that are detectable on Earth. But researchers are only just beginning to scratch the surface in understanding this enigmatic phenomenon. And FRBs aren’t the only cosmic mystery.

“We live in this very dynamic universe,” Li says. “We keep finding these weird, sometimes hard to understand, mysterious things. There are way more things in the universe that are unknown than what has already been known.”