The spectacle will be very different this year, but some things—like helium and physics—remain the same. 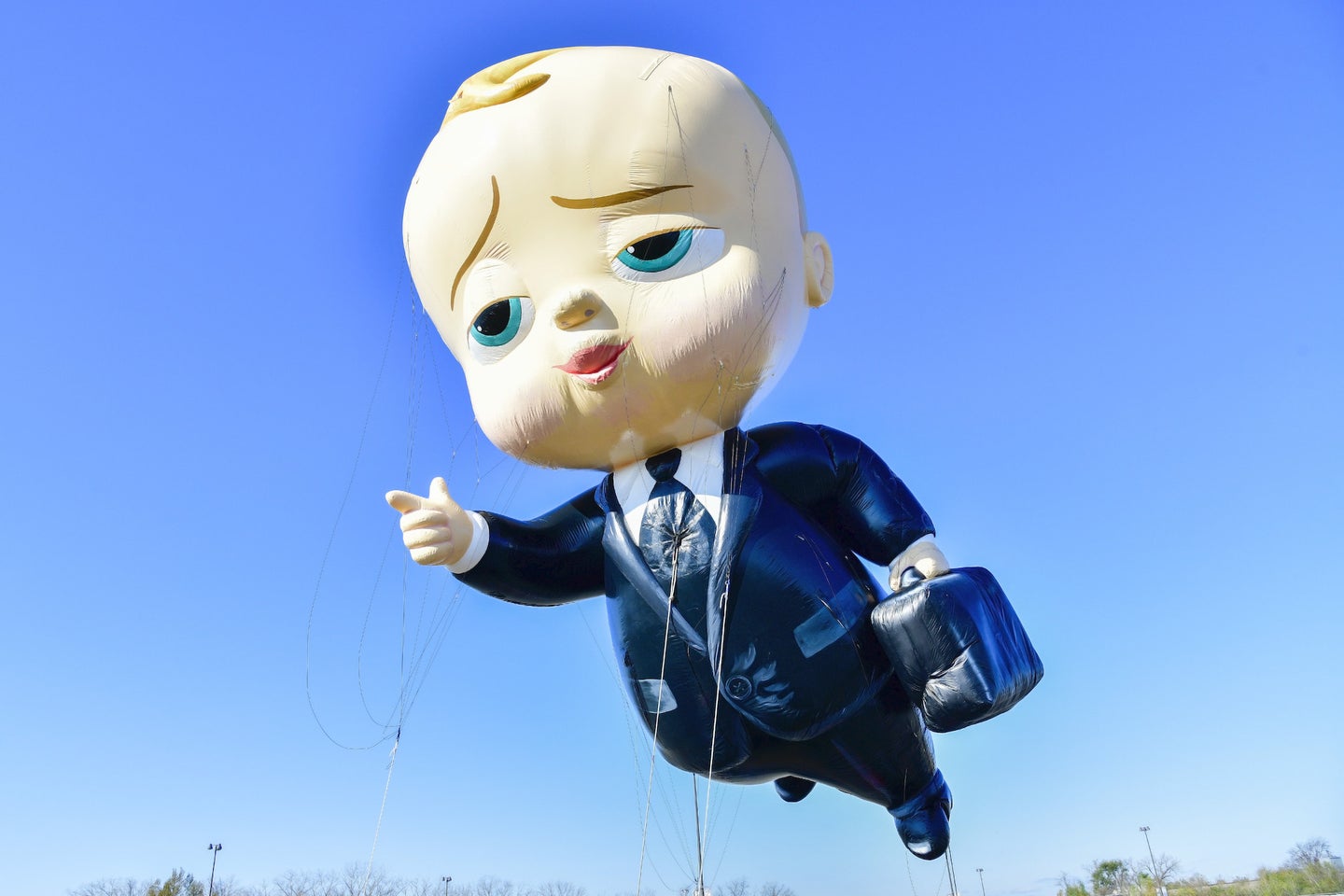 The Macy’s Thanksgiving Day Parade, the iconic, globally-beloved event that heralds the beginning of the winter holiday season, will undergo some of the most drastic changes in its 94-year history due to the coronavirus pandemic this year. Gone will be the sprawling crowds huddled along the 2.5-mile route through New York City. High-school marching bands will not be pounding out heart-racing rhythms, and the balloons themselves will not be floating overhead down the corridors of Midtown Manhattan to Herald Square.

Instead, the entire event this year will be a television-only affair. And rather than being mobile as in the past, it will take place next to Macy’s flagship store at 34th Street, incorporating social distancing safety measures for a dramatically reduced number of participants. But as disheartening as that may be during a remarkably bad year, 12 giant helium character balloons (down from 16 last year) and 35 floats will still be the centerpiece of the long-cherished November show.

The fact that the show is taking place at all in the midst of a global pandemic, however, is notable. The only times in the past that the parade has not been held was from 1942 to 1944 during World War II, when rubber and helium were needed for the war effort. In 1963, just a week after President John. F. Kennedy was assassinated on November 22, the parade went on, creating a buoyant spectacle for a nation in mourning.

While this year’s event (it’s hard to call it a parade since it won’t be moving very much) promises to be one of the most unusual in Macy’s history, evolutionary change has actually been a constant theme almost every Thanksgiving since it began in 1924. Here’s what’s changed—and stayed the same.

When the parade first started, the balloons were made out of rubber and were actually filled with air. They were essentially glorified cartoon inner tubes that were held aloft by cranes. Today, the balloons are filled with helium and made of light fabric that’s coated with polyurethane, a type of polymer plastic that is used in thousands of different applications, from sponges to varnish. Polyurethane is lighter, cheaper, more flexible, and stronger than rubber.

“Everything with balloons is about limiting that weight,” says Rick Pomer, creative director of the Macy’s Thanksgiving Day Parade. “Any detail we add all adds weight and throws off the whole equation.”

The balloons are manufactured by the Macy’s Parade Studio in a 72,000-square-foot warehouse in Moonachie, New Jersey. Macy’s balloon designers, known as “balloonatics,” still initially design the balloons with a sketchpad, but the designs are now put into a Computer-Aided Design (CAD) program like those used by architects and engineers. The results are sent to a 3D printer that, layer by layer, builds a small-scale model that helps the balloon designers better understand how the balloon will be assembled.

Most balloons these days are made with separate chambers—the arms, the head, the body—so that the whole balloon will not deflate should a hole appear in one part of the balloon. Once satisfied with the design in the scale model, the CAD file is sent to another group who makes fabric patterns that will be sewn together into the final balloon.

Last year’s crowd-pleaser, the “Love Flies Up to the Sky” balloon, designed by renowned Japanese artist Yayoi Kusama, had to have its tentacles moved during the design process to ensure better stability in flight.

Macy’s says that rather than hire all-new staff trained in computer design, they have spent the last few years training their current design team in the use of new high-tech tools. The balloons’ dimensions vary, but most are about four to six stories high and weigh about 200 pounds before inflation.

In the last few decades, the balloons have become so cumbersome that they can be dangerous. In 1997, high winds caused the Cat in the Hat balloon to hit a lamppost, part of which broke off and landed on a bystander: Kathleen Caronna fell into a coma that lasted for a month. Now, pole-mounted anemometers measuring wind speed transmit live wind measurements to licensed meteorologists who track when the environment may be unsafe. While wind is still a concern this year, because the balloons’ movement will be significantly restricted to a hundred feet or so, Macy’s officials do not expect similar issues as in years past.

Traditionally, the balloons are moved along by many human handlers, specially trained volunteers who are schooled in aerodynamics and physics, and who, when pulling a huge balloon along the route, resemble a band of Lilliputians who have just captured Gulliver. This year will be much different, with far few handlers. Instead of using only humans, Macy’s has built five specialty vehicles with an innovative anchor tether framework that has been extensively field-tested and approved by NYC officials.

“What was before 80 to 100 human handlers with lines coming from the balloons will come down to five vehicles and just 15 handlers per balloon,” says Pomer.

Macy’s ornate floats have also undergone similar changes over the years. Initially, artists would draw their designs on paper, and paper blueprints would be drawn up. Today, they are built in computer-based digital modeling programs that help determine the structural integrity of the design.

“We’ve really introduced science to the process and taken it to the next level,” says Pomer. “It has actually opened up opportunities in the world of design. We’re able to test things and see them in advance. The art is still there, it’s just done differently.”

Helium rises to the challenge

One thing that hasn’t changed is chemistry and physics. For lift, the balloons still use helium, the second lightest element in the universe. Helium use started in 1927 and has been a mainstay of the parade since, with the exception of the year 1958, when a global helium shortage kept the balloons closer to earth.

If there is any bright side to the pandemic, one could be that it kept us from experiencing another helium shortage this year. According to Phil Kornbluth, an expert on the global helium trade, in January, just before the Covid crisis, global helium demand slightly outpaced supply, causing a shortage. But several months into the pandemic, fewer workers were called in to businesses such as semiconductor manufacturing, where helium is used extensively.

“When COVID hit, we quickly went from a shortage to a surplus,” says Kornbluth.

Helium is also a key component in MRI scanners because its incredibly low temperature (-452.2 Fahrenheit) cools down the machines’ superconducting magnets.

In any event, the use of helium in the Macy’s parade is minuscule compared to global demand. The balloons fall under a category of use called “lifting applications” which includes party balloons, blimps, and weather balloons, among others, which together comprise less than 10 percent of global helium consumption, according to Kornbluth. The typical Macy’s parade balloon may use around 12,000 cubic feet of helium, while global consumption is on the order of 6 billion cubic feet per year.