The identification system blinks for a millionth of a second. 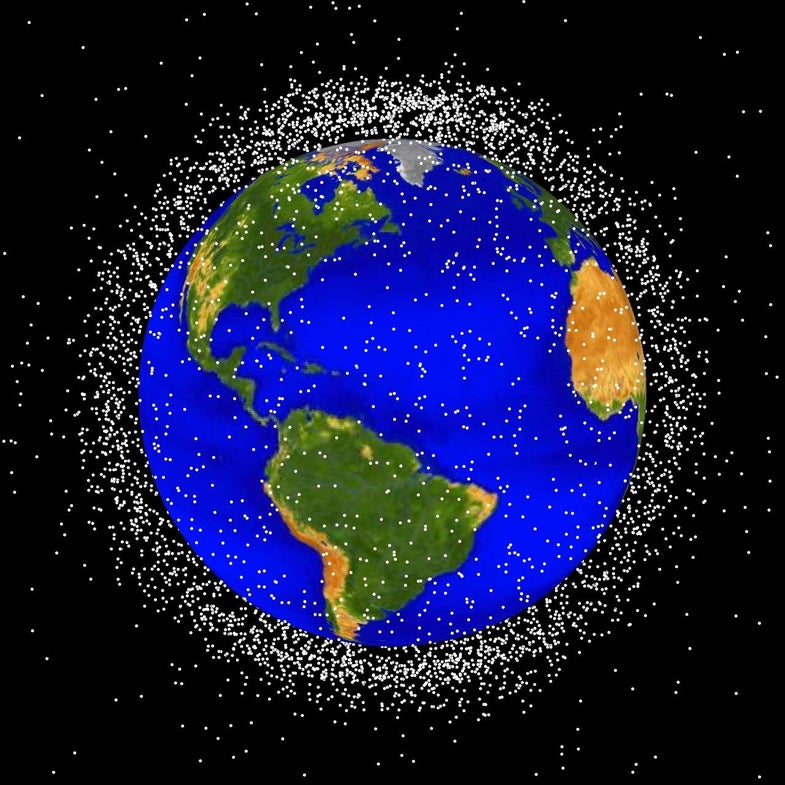 Before owning a car became typical, roads and highways (the few that existed) were never crowded. It was only after everyone started purchasing and driving their own vehicles—to work, school, even the grocery store around the block—that streets grew congested, rush hour became an everyday occurrence, and car accidents became an inevitability.

Space, despite its vastness, could be on a similar trajectory. With so many new flying objects being sent into orbit and beyond, many scientists say, we could be in for some dangerous collisions. One group at Los Alamos National Laboratory in New Mexico is trying to fix that with something ubiquitous among cars, but currently nonexistent for space mobiles: A license plate.

It’s unlikely we’ll ever fill our cosmic neighborhood with enough flying objects to create anything like a space traffic jam, where satellites have to slow down at specified times or travel in their own intergalactic lanes. But space, in all its low-to-no-gravity glory, poses its own challenges.

The majority of satellites and other fancy objects we send into the cosmos stay in low Earth orbit (LEO), around 400 to 1,000 miles above Earth’s surface. It’s far enough away from the planet’s gravitational pull, but not too far; this sweet spot lets an object orbit pretty much indefinitely without needing much help.

But scientists have taken advantage of this prime parking space for the past 60 years, so debris is starting to build up. There’s more space junk on the way, too. As of 2015, there are more than 1,300 active satellites orbiting the Earth. That’s in addition to the inactive ones, as well as old rockets and other defunct space junk stuck in LEO indefinitely. That’s likely to increase exponentially with the introduction of CubeSats, miniature spacecraft that can be sent into space by the hundreds, and the various companies that plan to install internet-providing satellites in the LEO. What a space jam.

But don’t things just float around up there like a giant game of bumper cars? Not even close, explains David Palmer, an astrophysicist at Los Alamos. While there have only been two really substantial space crashes, he says, one crash is all it takes to trigger catastrophe.

“The problem is that once you have one collision, it makes a lot of debris, and that debris can then collide. Eventually you get what’s called the Kessler effect,” he says. Debris keeps building up with each new collision, creating infinitely more crashes. If this begins to happen on a regular basis, it’s possible for so much space junk to accumulate that space itself becomes unsafe.

“We are close to the point where if we keep on going for a little while longer, we will be pushing over the edge,” he says. “Once that starts happening, it can progress for a decade or two until there is too much debris in low Earth orbit.” At that point, the chances of a collision (and subsequent Kessler effect) become so high that the benefits of sending another satellite into LEO don’t outweigh the risks.

The big problem is when satellites retire. While in use, nearly all have GPS devices that scientists can use to find them with radio signals. But once satellites are out of commission, so are those radio waves. The space junk just orbits, without monitor, indefinitely. If an active satellite seems like it’s going to collide with one of them, the owner can dodge out of the way. But once a point is reached where space junk is just colliding with space junk, researchers can’t move either bodies out of the way without an owner’s permission. And to know who it belongs to, you first need to know what the object is. “You would need the permission of the satellite owner even if it’s a 30-year-old piece of space junk,” says Palmer. There has to be another method—a foolproof identification system. That’s how Palmer sees it.

His past research studying pulsars gave him an idea. Pulsars are large space objects that spin and emit beams of light in opposing directions. As they spin their light beams appear to flicker, and scientists, like Palmer, have put a lot of effort into studying that flickering.

“I put those two things together and thought that if I could create a satellite that produced a periodic signal,” says Palmer, “then by reading that signal, we could create an accurate identification system.

So Palmer and his team developed a super-low-power, miniature device that emits a unique pattern of blinks in the form of a laser. They call it Extremely Low Resource Optical Identifier (ELROI) or, more casually, space license plates.

Meant to be about a square inch by square inch, these devices would sit atop any satellite bound for space. Using a laser diode (what many everyday lasers are made of), the device would emit a series of very short red laser pulses. These flashes would be extremely bright (as bright as a 60 watt bulb, from something that uses only one watt of total power), and would continuously flash a series of specific pulses for no more than a millionth of a second. It would then shut off for a thousandth of a second—a thousand times as long as it was on for. A telescope on Earth could pick up that series of flashes, and with the help of a computer program, decipher what specific satellite it was coming from.

Despite the satellite being hundreds of miles away from the ground, the message is still crystal clear, explains Palmer. The light is coming from a laser and is the exact wavelength of the color red. A filter in the telescope blocks out all other wavelengths, allowing that color to shine through. The blinking corresponds to a binary (composed of hundreds of 1s and 0s) serial number. Each satellite, like a car, gets its own serial. The code tells the identifier three things: The kind of satellite it is, who owns it, and the path of its orbit.

The goal, says Palmer, is to have the devices sit on satellites and remain powered for at least 25 years, if not indefinitely. The the device uses a huge percentage of its battery’s life during its split second of blinking, but then spends a thousand times longer charging with solar energy. It can do this repeatedly, says Palmer, for about 25 years. Palmer thinks the device will be able to run off of its solar cells indefinitely even after the battery dies, but it’s impossible to be sure.

Their next goal is to actually test the prototype. They plan to do so by working with a team at New Mexico Tech who are sending a CubeSat into space this coming January. CubeSats, says Palmer, are an ideal vessel to test the device on: They are tiny, 10 centimeter cubed satellites that can be sent up into LEO, often en masse, to perform small experiments.

Though the prototype is ready for a test launch, Palmer says, the researchers are still tweaking the design. The ELROI is currently about four square inches and one inch thick. In the future, the team wants to get it down to the size of a postage stamp, and use materials such that the entire thing costs under $1000. That way, he says, even a high school science class can afford to send one up to low Earth orbit. CubeSats’ low cost (one can cost only $10,000 to build; launching them into space is a few tens of thousands more) means they can be used by small, private companies, university students, and even high schoolers. Make the license plate price any higher, says Palmer, and, “that’s a lot of cakes you would have to sell at the bake sale.”

With the license-plated CubeSats up in space, the researchers will attempt to identify the miniature spacecraft by pointing a telescope at them and translating the binary code. If all goes according to plan, the goal is to test them on bigger satellites, with the ultimate objective to get them on every satellite that enters space.

Palmer admits that ELROIs are not a perfect solution. If two satellites are indeed colliding, you still need to ask for permission from the abandoned space junk’s owner before you remove it from orbit. If there isn’t enough time to track that person down, knowing who they are might not help you avoid disaster. But identifying who owns the aged space junk is indeed a good first start. It might not be too long before low-Earth orbit looks more like a busy highway than a vast, endless entity. And then people may wonder how breezy that open road must have been, back before satellites needed laser-powered license plates.