The telescope must be kept at -370°F, which is cold enough to freeze nitrogen. 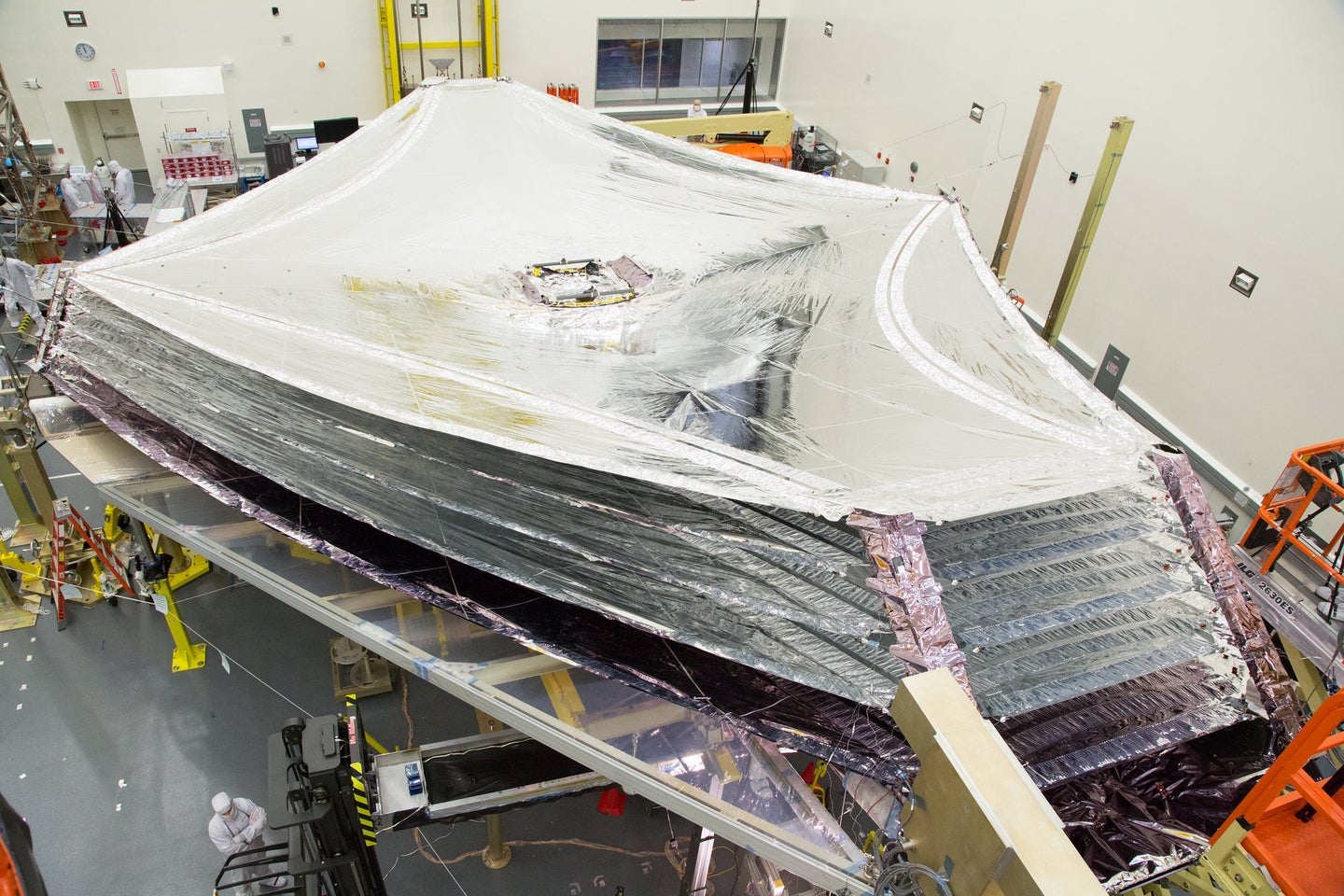 The James Webb Space Telescope (JWST) is busy unwrapping itself, making a grand entrance to its new home about 930,000 miles (1.5 million kilometers) from Earth. JWST will observe faint distant objects in infrared light, and because heat also travels as infrared radiation, JWST needs to operate under very finicky temperature conditions.

“It can’t have other sources of heat,” says James Cooper, a NASA engineer. “It’ll just swamp the science you’re trying to get.”

The telescope’s mirror and instruments need to be kept below about -370°F (-223°C)—cold enough to freeze nitrogen. That’s no easy task when the sun’s rays and the spacecraft bus, which contains JWST’s central computer and communications, can heat the telescope and its instrumentation up to a tropical 230°F (110°C).

Fortunately, JWST has a cooling device of its very own: a sunshield, as its creators call it. Shaped like a kite, the size of a tennis court, and made of layers less than a millimeter thick, JWST’s sunshield is able to cool the telescope by several hundred degrees.

Getting that sunshield to work has been a long and tortuous task. Cooper has helped lead the sunshield’s development for more than a dozen years, and he’s seen many of the trials and tribulations the structure overcame in order to work.

Planning JWST took decades, and its designers knew they wanted a sunshield early on in the development process, even before Cooper came aboard. To build the sunshield, the designers looked at several plastic-like materials before settling on one called Kapton.

Kapton isn’t a new material—it’s a mainstay in the world of cryogenics, since its thermal properties are good for keeping very cold things cool. Additionally, Kapton, says Cooper, is “tougher than most similar [materials] and it doesn’t tear as easily, and it’ll survive the space environment better.”

JWST isn’t Kapton’s first flight into space. It was used to insulate the engines on Apollo’s lunar modules; humans have literally strewn it across the moon. There, lunar modules had a tendency to blow it about when astronauts lifted off to begin their return journeys. Neil Armstrong recalled that, when Apollo 11 ascended from the lunar surface, he could see Kapton “scattering all around the area for great distances.”

More recently, New Horizons used Kapton to keep its temperature stable as it journeyed from Earth to fly by Pluto and Charon in the solar system’s freezing outer reaches.

JWST’s sunshield is fashioned from five layers of Kapton, each the thickness of a human hair. The layers are separated by vacuum gaps to prevent heat from conducting through the whole shield.

Each layer is coated with aluminum, and the two layers nearest the sun are also coated with doped silicon. In addition to making the sunshield more reflective, these metals improve its electrical conductivity—to avoid static electricity building up inside the sheets.

Moreover, each layer’s edges had to line up, and each layer had to be pulled taut and flat. The spacing needed to be even to prevent heat from getting trapped in the middle of the shield.

When it came time to assemble the sunshield, the NASA team faced another hurdle. “The Kapton comes in 4-foot-wide sections, and we need a 70-by-45-foot sunshield, roughly,” says Cooper. “And so we had to seam it together.”

They did this by essentially melting the edges together, and adding additional strips as “rip-stops” to help prevent tears. Even if one area tears, the rip-stops will isolate the problem and allow the rest of the sunshield to operate as planned—or so the designers hope.

Piecing together the sunshield was only half of the challenge. For the telescope to fit into the Ariane 5 rocket that launched from French Guiana on Christmas Day, the sunshield needed to be folded up and fastened with pins. It was a puzzle: the shield had to be secured when folded, operational when unfurled, all while avoiding damage to the delicate material.

“You end up with 25, 30 layers of membrane — and you have the [pin] holes all line up, so you can put a pin through them — and they have to line up every time you fold it,” says Cooper. “And developing the tools to do that was a massive challenge, because you also can’t have those holes line up with each other when you’re deployed, or the sun comes right through.”

[Related: After years of delays, the James Webb telescope is finally in space]

They needed to perfect the system for releasing the sunshield. Unfolding the shield relies on 107 different release devices. If even one of those devices fails, then the entire telescope is compromised. And the NASA engineers had to ensure the tethers holding it together didn’t accidentally snap and graze the shield. “So we had to spend a lot of effort on looking anywhere that a cable could possibly go,” says Cooper. And they had to test all of this on the ground—away from the microgravity where the telescope’s shield will actually unfurl.

But now, all of that is behind them. The launch has gone smoothly so far–in fact, it used much less propellant than expected, which NASA predicts will extend the observatory’s lifetime by years. On Tuesday, JWST began to unravel the sunshield. If all goes according to plan, it will continue to gingerly unfold its cooling armor until January 3.