Lucy in the sky with nanodiamonds. 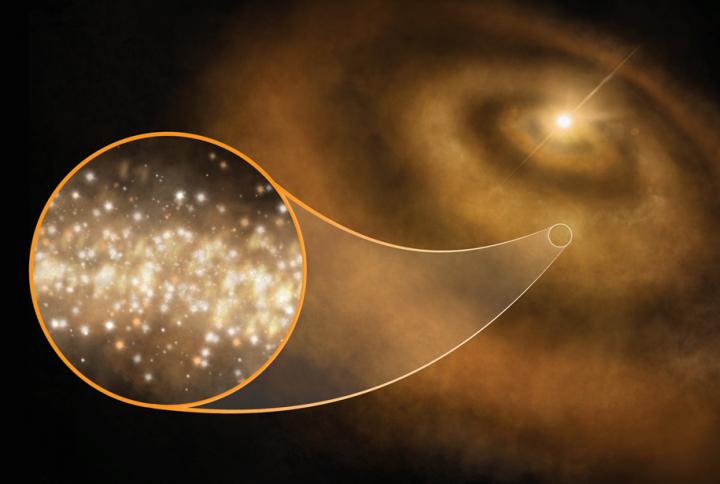 Astronomer Jane Greaves wasn’t looking for diamonds, or strange microwave emissions. What she really wanted to look at was dust, but the numbers coming in from the instruments on the Green Bank Telescope didn’t match up with anything that she expected to see.

Greaves studies the early stages of planet formation, and several years ago, she decided to take a closer look at some stars adorned with rings of dust which haven’t yet coalesced into planets, moons, and asteroids. She went to Green Bank, a massive observatory in West Virginia to take a closer look at some protoplanetary discs with some of the facility’s sensitive and unique instruments, but the readings she got back were strange.

“I was looking for emissions from small dust particles that would get steadily brighter. But this emission got brighter and then got fainter again as you went along in the wavelength—and that’s a really difficult thing to make by most astronomical processes,” Greaves says.

The odd shape and pattern of the wavelengths around the distant, hot star would vex her for years.

“I’ve been staring at this set of numbers for about eight years or so going ‘those are wrong, those are wrong,’” Greaves says. She continued working on other projects as the data from Green Bank sat there. Then she happened to attend a few talks by colleagues on something called anomalous microwave emissions (AME) at the University of Manchester. She realized the numbers that seemed so wrong weren’t a mistake, but rather something completely different from the dust she’d gone looking for.

In a paper published in Nature Astronomy, Greaves and her colleagues announce that they’ve detected AME in three systems, all with a very interesting defining feature—they’re known to have nanodiamonds near their stars.

AMEs were first detected about 20 years ago, showing up in surveys of interstellar space as odd fluctuating emissions—similar to the radio wave emissions that Greaves saw around the star.

No one could pinpoint exactly what they were or where they were coming from, but based on the readings it seemed like they could be coming from spinning nanoparticles, which could produce that distinct, identifiable radio wave signature.

“Imagine you’re walking along in the dark and you’re holding a flashlight and you keep turning the flashlight over and over in your hand. If someone was looking at you they’d see a wavy light trail behind you as it turned. It’s kind of like that, but it’s a radio wave instead of a flashlight,” Greaves says.

But what kind of nanoparticles were they? That’s where Greaves’ research comes into play. Thanks to readings made over the course of decades, researchers had observed three star systems with protoplanetary discs that also contained a distinct pattern of light waves indicating tiny nanodiamonds—many just a few atoms across—orbiting their hot, bright stars. One of those systems was the one that Greaves investigated at Green Bank.

When Greaves and her colleagues took a closer look at the three stars known to have nanodiamonds surrounding them, they found that all three were also emitting AME, which hadn’t been seen before coming from the environment around a star.

These diamonds aren’t like the ones that you might wear, and the emissions they give out aren’t ‘sparkles’ in any sense of the word. It’s closer to diamonds used in industrial applications, for drilling or grinding other materials, than anything you’d buy at a jeweler.

“Industrial diamond powders aren’t very exciting when you look at pictures. It’s disappointing, but maybe there are slightly bigger ones out there—the ones found in meteorites that are slightly larger chunks of diamond are a bit more exciting,” Greaves laughs. These diamonds are only a few nanometers across, and are also coated with a layer of hydrogen atoms, picked up as they travel through the hydrogen gas in the solar system.

They may be small, but they could also help solve a big puzzle—where AMEs come from. This gives researchers investigating AMEs coming from interstellar space another clue to look at, to see if the spinning nanoparticles they’re looking for in deep space might also be diamonds.

Greaves and her colleagues plan to continue their research. In addition to finally being able to write up her original research looking into the dusty protoplanetary disc, Greaves hopes to collaborate with nanodiamond experts, and also plans to work with a student and start looking into possible connections between nanodiamonds and the interstellar AMEs

“Hopefully we’ll get a statistical view of whether this is something much bigger than three particular protoplanetary discs,” Greaves says.