NASA shot incredible images of supersonic jets and their shockwaves. 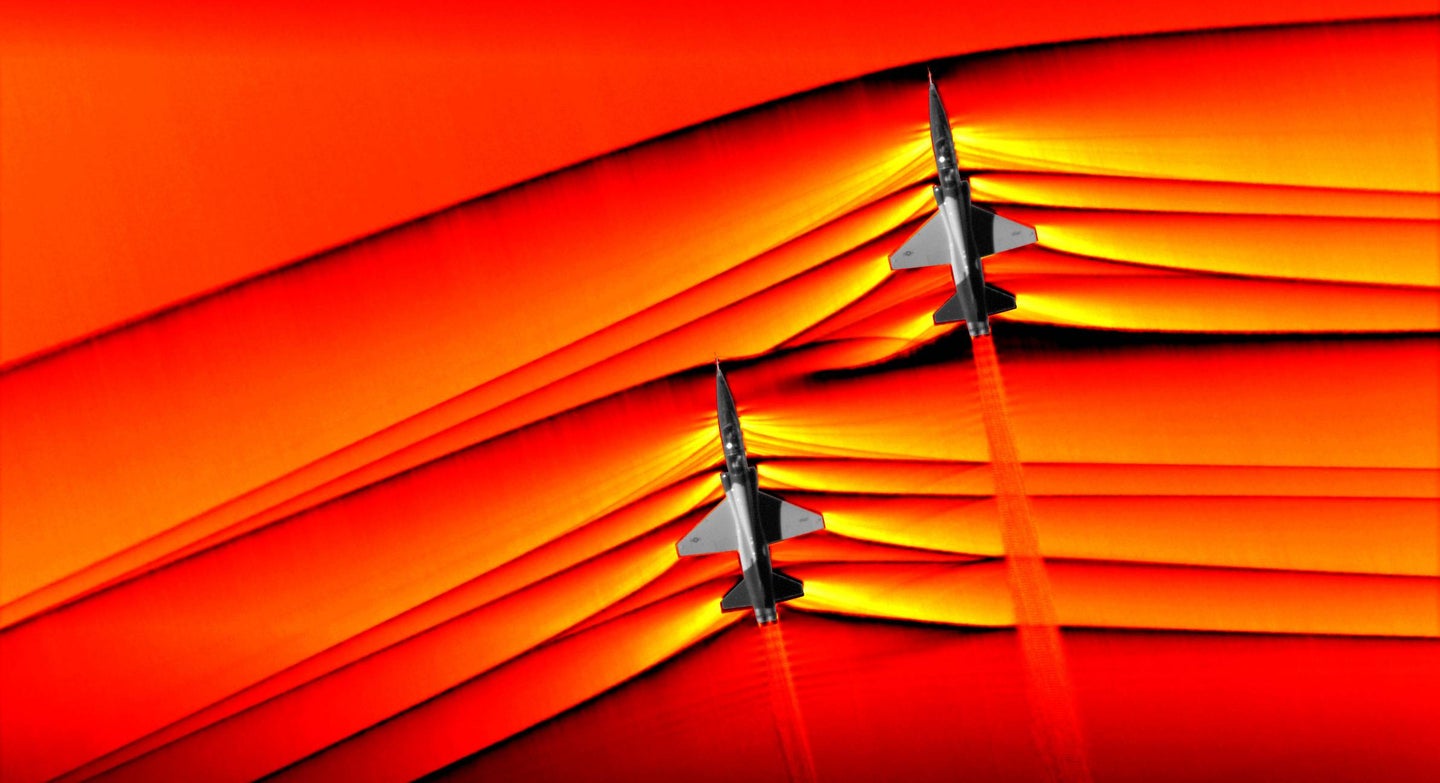 This two T-38s are traveling just faster than the speed of sound, and the shockwaves they producing are clearly visible. NASA Photo
SHARE

You’ve likely heard of a sonic boom—the loud noise that would reach your ears if a supersonic aircraft flew overhead. But it turns out that images of shockwaves caused by flying faster than the speed of sound are awesome to see even without the sound. In the image above, NASA photographed two T-38 aircraft flying at just faster than the speed of sound over California.

To get the image, NASA used a Super King Air turboprop aircraft flying at an indicated airspeed of about 160 mph at 30,000 feet. The two supersonic jets, separated by about 30 feet front to back and 10 feet vertically, were below the King Air by about 2,000 feet when it shot the images.

The King Air has ports on its belly that can be opened or closed, and the photography gear was positioned in one of those ports so it could shoot downwards.

“We have high-resolution, high-speed cameras, and we are photographing the desert floor,” says Dan Banks, a senior research engineer at NASA’s Armstrong Flight Research Center in Edwards, California. “And then the target aircraft—in this case, the T-38s—fly underneath.”

In one of the images below, you can see a T-38 on its side breaking the sound barrier. In that case, the turboprop doing the shooting was still above the supersonic jet, but the T-38 had rolled sideways.

The shockwaves form as supersonic aircraft travel through the air, almost like a bow wave in front of a fast boat, Banks explains. “The air basically can’t get out of its own way,” he says. “The way nature deals with that is, it develops a shockwave.” In the image above, the T-38s were going at Mach 1.01, which is just over the speed of sound. (Mach 1 is the speed of sound, which actually changes depending on an aircraft’s altitude.)

The shockwaves were photographable because of the change in air density. “The density change causes a change in the index of refraction,” Banks says, comparing it to the way a spoon will look distorted when you see it submerged in a glass of water. “As the shockwave goes over the desert floor, you’ll see the features—in this case, the scrub brush—will appear to move slightly.” In other words, the shock waves are visible because of the way they distort the background, like the way heat comes off a hot parking lot in the summer and changes your view of what’s behind it.

NASA had to do some work to make the image come together—the layer of the image that’s been processed to show the shockwaves doesn’t clearly show the aircraft. “It looks almost like a ghost aircraft,” Banks says. By combining that layer with another layer that sharply shows the planes, and then colorizing it, they were able to produce the shot above.

So why do all this? NASA is working on an aircraft called the X-59 QueSST—the agency’s goal for that craft is for it to be supersonic, but not as loud. It should just produce “a quiet rumble,” NASA said in a statement. Research like this will help the agency with that goal, Banks said, because it helps them visualize what’s happening with supersonic shockwaves.