A key part of the Big Bang remains troublingly elusive

Physicists still don't understand what happened in the instant after the Big Bang. 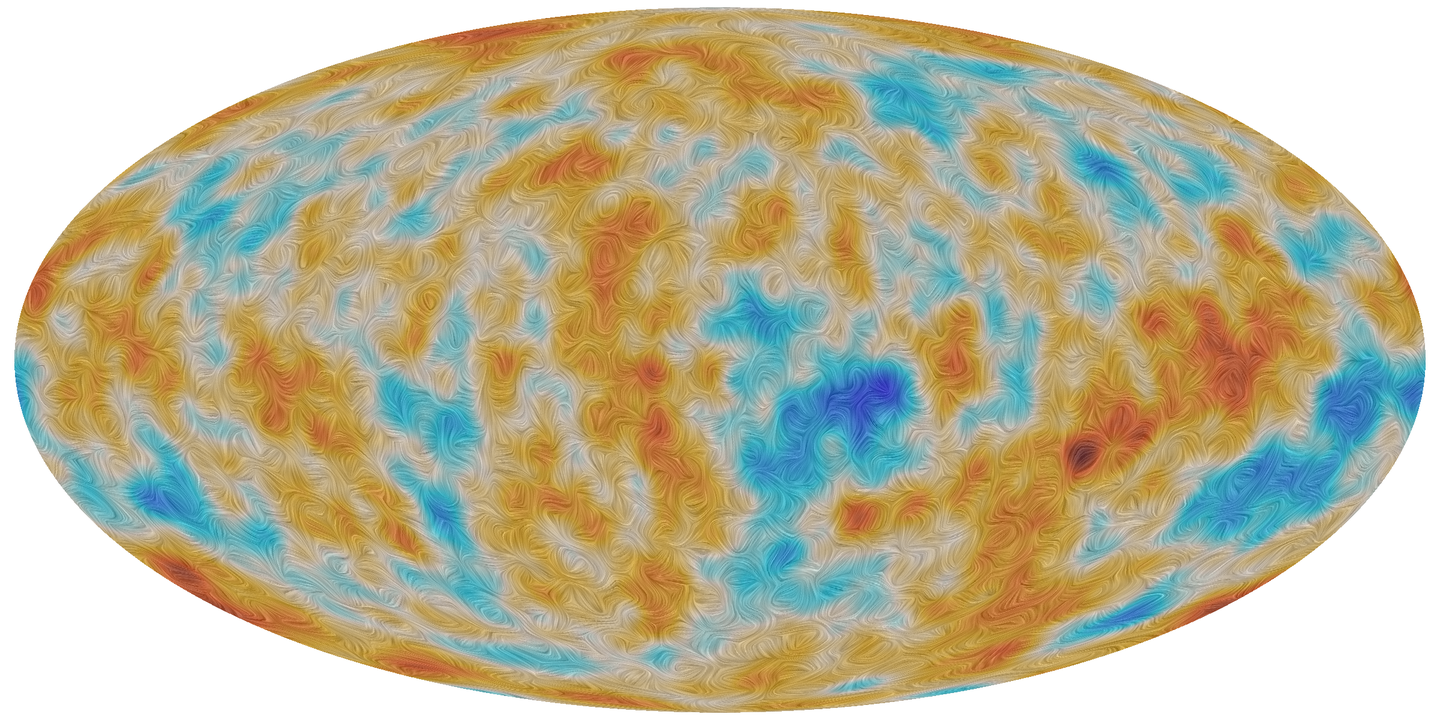 Fingerprints of reverberations from the first moment could be hiding in the universe’s oldest light, but astronomers haven’t found them yet. ESA and the Planck Collaboration
SHARE

It all started with a bang. During an unimaginably brief fraction of a second, the embryonic universe ballooned in size with unimaginable swiftness. In a flash, dimples of imperfection stretched into cosmic scars and locked in the universe we experience today, a milieu filled with galaxies, stars, planets, and humans.

The circumstantial evidence for this origin story, known as inflation, is overwhelming. It has inspired a generation of cosmologists to write papers, teach classes, and publish textbooks about the sundry ways inflation could have played out. And yet, a smoking gun remains elusive: Ancient ripples in spacetime should have left a particular imprint on the sky, but searches have repeatedly come up short.

A group of astronomers known as the BICEP/Keck collaboration leads the hunt for these “primordial gravitational waves.” On Monday the researchers released their latest results, the culmination of years of painstaking labor in one of the harshest places on Earth. Once more, they found no sign of their quarry. If an inflating universe reverberated with gravitational waves—as most cosmologists still fully expect it did— it must have done so in a rather subtle way.

The “simplest flavors, we are right now ruling out,” says Clem Pryke, an astrophysicist at the University of Minnesota and member of the BICEP/Keck collaboration. “[This result] is killing previously very popular theories of inflation.”

The oldest light in the universe has been streaming through space for more than 13 billion years, ever since the cosmos cooled enough to become transparent. Astronomers have precisely mapped this “Cosmic Microwave Background (CMB)” and used it to learn that the universe was, and has remained, strikingly uniform overall. The CMB indicates that when the universe was just 380,000 years old, it had nearly the same density of matter everywhere. And today, astronomers see galaxies in every direction.

But the CMB is ever so slightly clumpy, and it clumps in a special way. Dense and thin spots come in all sizes, from very small to very large. Today we see a related pattern, from single galaxies to giant mega clusters of them.

How did the universe get this way? Inflation winds back the clock even further, attempting to explain how lumps of all sizes developed during the cosmos’s first 0.00000000000000000000000000000000001 of a second. During this period, the minuscule universe seethed with energy, and quantum theory ruled the day. In the quantum realm, nothing holds perfectly steady. Subatomic jitters continuously introduced tiny flaws into the inflating universe, tweaking the density of substances that would eventually become light, matter, dark matter, and more. The growing universe continuously stretched these blemishes, even as newer, smaller fluctuations kept appearing, resulting in blips of all sizes. Eventually, the CMB recorded the final product. “Inflation naturally produces lumpiness of exactly that type,” Pryke says.

Or so the story goes. Inflation has become the leading theory of the birth of the cosmos because it explains exactly what astronomers see when they study the large-scale patterns formed by matter, dark matter, and more.

But one pattern has eluded them. The fabric of spacetime itself cannot hold perfectly still at the quantum scale, and inflation should have stretched those initial tremors into proper waves just as it did with matter and everything else. These primordial gravitational waves would have left faint fingerprints in the CMB, specific whorls in the light known as “B-mode polarization.”  Astronomers have the capability to directly detect these whorls today, if the pattern is prominent enough, but have yet to find any.

Frustratingly, the universe is awash in materials that shine in a similarly whirly way. The BICEP team triumphantly announced the discovery of primordial gravitational waves in 2014, for instance, only to later learn that they had picked up the dim heat glow of dust grains streaming along the magnetic fields that fill the space between stars in the Milky Way.

The lowest ceiling yet

The BICEP/Keck collaboration has now spent years refining their methods and building a series of telescopes at the south pole, where the crisp and arid air offers a crystal-clear view of the cosmos. Their newest results blend data from the last three generations of their Antarctic telescopes with other experiments.

For more than a decade, they have increased the number of sensors from dozens to thousands. And crucially, they have expanded the set of “colors” in which they observe, from one wavelength to three. Any B-mode swirls in the CMB, which fills the entire universe, should show up evenly in all wavelengths. Polarization that comes through more strongly at different wavelengths, however, can be blamed on local dust.

The key measure of how much inflation rattled the universe goes by the name “tensor-to-scalar ratio,” or r to those in the field. This single number describes how forcefully space time rippled compared to other fluctuations. An r of zero would imply that inflation didn’t rock the fabric of the cosmos at all, suggesting that cosmology textbooks might need to rip out their first chapter.

BICEP/Keck observations have successively lowered the ceiling for primordial gravitational waves, showing that r should be smaller than 0.09 in 2016 and less than 0.07 in 2018. With the latest results, published in Physical Review Letters, the collaboration states with 95 percent confidence that r should be less than 0.036, a value that makes one commonly studied class of inflationary models impossible.

The shrinking limit for gravitational waves has obliged theorists to crouch lower and lower, but plenty of riffs on the general theme of inflation still fit comfortably below the new BICEP/Keck roof. The situation is getting cozy though, and if the limit falls below 0.01, many inflation researchers will start to sweat.

“It’s pretty hard to get a value less than that in any basic textbook model of inflation,” theorist Marc Kamionkowski of John Hopkins University told Physics Today in 2019.

[Related: Wait a second: What came before the big bang?]

How low can cosmologists go

The nearly hundred members of the BICEP/Keck collaboration plan to reach that level of precision in a matter of years. They are currently building a new array of four telescopes, which should allow for a measurement of r up to three times as precise. By the end of the decade, a mega-collaboration between BICEP/Keck and other CMB teams known as CMB-S4 should get a few times more sensitive still, limiting r to roughly 0.001.

Many cosmologists hope that primordial gravitational waves will show up in one of these ever-sharper images of the CMB, proving that theorists really do have a handle on the universe’s initial bang. If not, the theory may languish in limbo a bit longer. It would take an r ten times lower still to cull most straggler inflationary models, and that would require experimentalists like Pryke to once again come up with even better ways to measure the nearly imperceptible ripples theorists forecast.

“From an experimental point of view, it just seems unobtainable,” he says. “But when I got into the business 20 years ago, measuring B modes at all seemed ridiculous.”