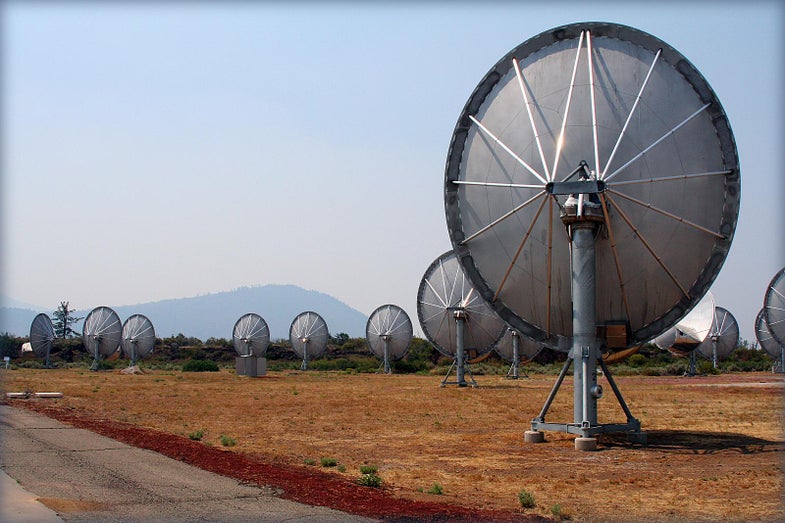 Some of the 42 telescopes that make up SETI's Allen Telescope Array. Kathleen Parker
SHARE

The following is an excerpt from Making Contact: Jill Tarter and the Search for Extraterrestrial Intelligence by Sarah Scoles.

It is 1 a.m. on March 10, 2014, in Northern California, and Jill Tarter’s face peers from the doorway of a dorm in the Hat Creek Radio Observatory residence hall.

“It’s beautiful out there right now,” she says, gesturing toward the window.

Tarter walks down the hallway past the observatory’s library (which is filled with copies of the Astrophysical Journal dating back to the 1940s) and the lounge (which houses a particularly riveting issue in a burn bucket next to the fireplace). She steps out of the dormitory and onto the cold-steeped cement. The mosquitoes that normally plague the area around Hat Creek Observatory, home to the SETI Institute’s Allen Telescope Array, have all gone to bed. The air feels clean, the planet quiet and emptied of creatures. Tarter looks up.

Above hangs a clear, dark sky. The stars look like the crafts kids make at school: crisp pinpricks in the blackest construction paper, a UV lamp shining behind them.

“I can’t even find the North Star,” says Tarter. “I’m going to go get my glasses.”

She has hardly reemerged with her spectacles when she rushes back inside for her iPhone.

“I think that’s Mars,” she says, pointing at a bright reddish dot. After her celestial chart app boots up, she hefts the screen toward the sky, scanning across a quadrant. “It says Mars, Saturn, and Pluto are all near each other,” she continues. She returns to staring at the sky, turning her head a few degrees at a time to change perspectives.

Each star is a sphere of plasma whose inward-pulling gravity perfectly balances the outward-pushing pressure from nuclear fusion. This symmetry is called hydrostatic equilibrium, and it’s what makes a star a star. Flaring and sun-spotted, they impose their radiation on the space around them, light-years from us. Maybe that space is home to planets, which maybe are home to biology, which perhaps evolved into beings smart enough to understand starlight.

This scene is almost too easy a mirroring of Tarter’s childhood memories. Looking up from the deserted beaches of southern Florida, she was certain that an alien child was looking at the sun. Their gazes, she imagined, met in interstellar space like awkward strangers’ on a subway train. She has this thought over and over. It is the kind of Groundhog Day observation that keeps her motivated to continue the search, despite the vastness of the universe, the brevity of human life spans, and governmental desire to spend money on missiles instead of science.

A thousand yards away, the Allen Telescope Array (ATA)—Tarter’s dream observatory, or at least a version of it, made for and dedicated to SETI work—scans the sky in search of intelligent life long after she has returned to sleep.

The idea for the ATA came from a series of workshops held from 1998 to 2000. These posh gatherings, collectively called SETI 2020, plotted the route of SETI research for the next 20 years. While scientists and their university salaries don’t expect overly cushy conferences, Tarter and her SETI colleagues didn’t want those usual invitees: They wanted Silicon Valley technologists—specifically, Greg Papadopoulos of Sun Microsystems, David Liddle of Interval Research Corporation, and Nathan Myhrvold of Microsoft—on board. And Silicon Valley technologists, with their dreamy entrepreneurial visions, require minibars and rooms of their own, with views.

At the conference, the attendees’ main conclusion was “SETI needs its own telescope,” closely followed by “And perhaps we should figure out how to build it.” Though piggybacking had worked well in SETI’s early decades, to gather and handle the stream of data they expected, they would need their own setup and computers hundreds of times faster than those that existed. The tech moguls, used to thinking about the big thing after the next big thing, suggested the SETI scientists “make a bet on technology,” specifically on a concept called Moore’s law. This law, which is just an observation of what happens in the real world, states that computers double in power every two years. It has held true since the first gigantic Macintosh. Even if you haven’t heard of this modern-day math, you know how slow your two-year-old laptop now seems compared to shiny new ones on the shelves of Best Buy. Papadopoulos and Liddle felt sure they could count on Moore’s law: The computing power doesn’t exist today, but it will be there tomorrow, when you need it. And it will be cheap(ish).

It was a Silicon Valley idea, new to the scientists, and it felt radical back then, when everyone still had dial-up AOL and videos didn’t go viral because they took too long to load.

With the future’s unimaginably shiny computers in mind, Tarter and her colleagues made a plan for their SETI-specific observatory: a bunch of small antennas—350 of them—that worked together. If you point multiple antennas at the same thing at the same time, you can merge their views to make a single superior image. The telescope’s combined vision will be as sharp as if it came from a single telescope 3,000 feet wide, rather than from hundreds of 20-foot telescopes spread across a 3,000-foot-wide area. It’s a neat trick. After all, building a bunch of identical dollhouses and sprinkling them around a mansion-sized lot is much easier than constructing the mansion itself. “We were the pioneers of building a giant telescope out of lots of little telescopes,” says Dan Werthimer, who worked on SERENDIP and the ATA and has been a leader at UC Berkeley’s SETI program since its earliest days.

The team estimated the ATA’s cost at $25 million. The SETI Institute just needed to find the money and a place to plop the antennas. Long-established collaborations between the Radio Astronomy Lab at Berkeley and the SETI Institute, starting with Jack Welch’s 1980s offer to host the SERENDIP piggybacker, made the question of location easy: the two organizations would work on the telescope together and build it at Berkeley’s Hat Creek facility. The Institute would largely build it; Berkeley would largely operate it; they would split its observation time 50/50. “The original vision for the ATA was a world-class telescope,” says Werthimer.

But the money question remained. Luckily, Tarter knew someone who had $25 million to spare and a soft spot for SETI. Paul Allen, co-founder of Microsoft, had donated a project called Phoenix in the 1990s. She asked him if he would again like to support and save SETI. While the team awaited Allen’s response, they began building a prototype array under system scientist Douglas Bock: a collection of practice antennas on which they could test each new part, before transplanting them into the real-world antennas. The prototype lived in a horse paddock outside an empty barn in Lafayette, California, with the control center in the former tack room.

The night before the prototype’s dedication ceremony, Tarter stayed up late, working and refreshing her email. She works a lot—seemingly all the time. “She puts in more time than anybody else on the project,” says Gerry Harp, who took over as the director of the Center for SETI Research when Tarter retired and has gotten many late-night emails from her. “She’s just an amazingly energetic woman. I remember that she would work long days and then go home and do email and write stuff all night long, and I don’t know when she slept.” (I’m pretty convinced she doesn’t.)

She hoped Allen would respond with a yes, so they could announce his endorsement at the next day’s ceremony. But the inbox disappointed, and she eventually headed to bed. Not wanting to wake her husband, Jack Welch, she attempted to take off her pantyhose in the dark. But instead of being stealthy, she tumbled over and shattered her elbow. Later, X-rays in hand, Tarter tried to map the many ways she’d broken her bones.

With 13 pieces of titanium and straps embedded in her arm, the newly bionic woman sat through the dedication. “I kept wanting a more heroic story to tell,” she says, and sighs. “Pantyhose.”

Excerpted from Making Contact: Jill Tarter and the Search for Extraterrestrial Intelligence by Sarah Scoles. Published by Pegasus Books. © Sarah Scoles. Reprinted with permission from the publisher. All other rights reserved.