Astronomers may have an origin story for ‘The Cow,’ a mysteriously powerful cosmic blast

Researchers may have witnessed a black hole or a neutron star’s birth. 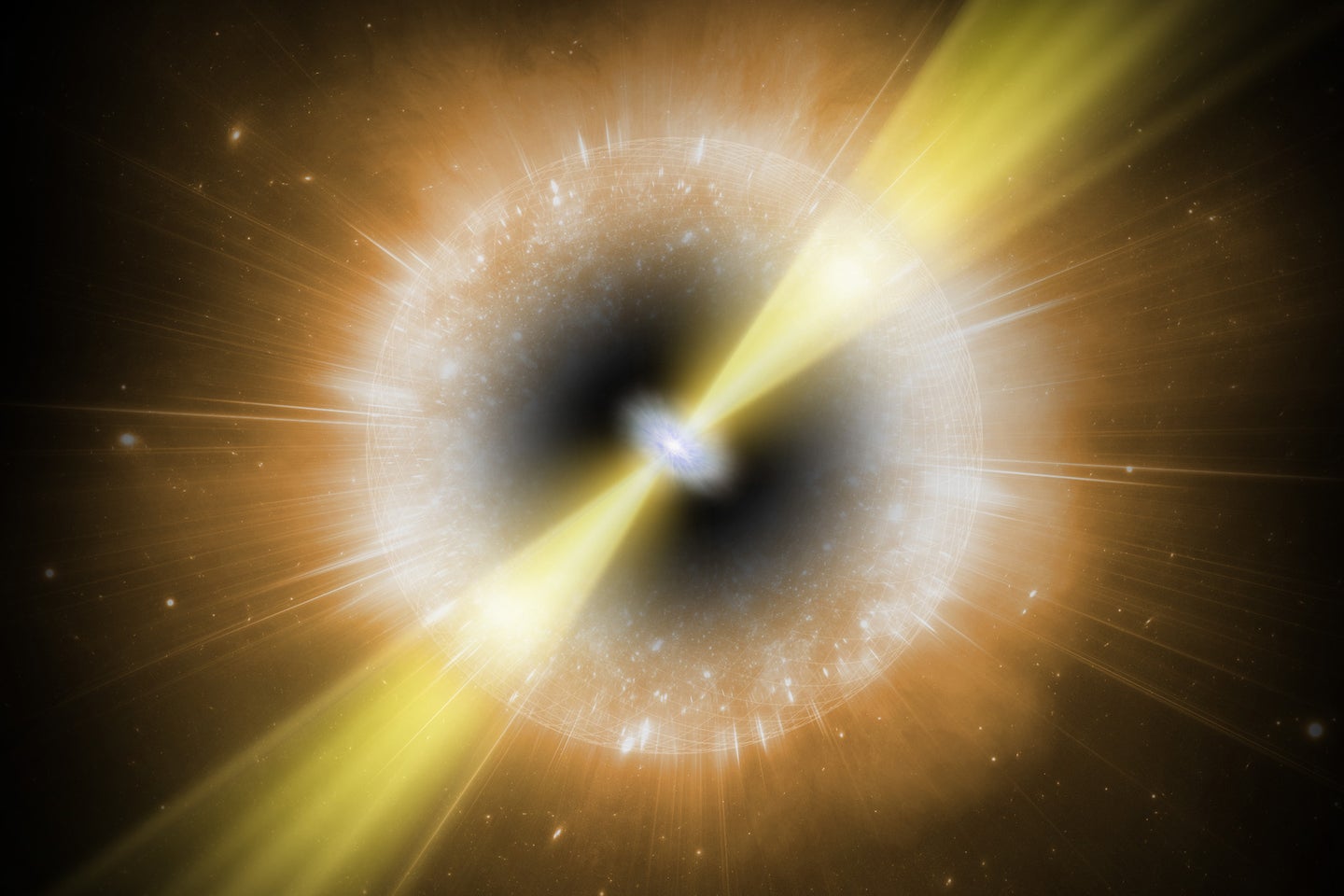 An artist’s impression of the mysterious burst AT2018cow, also known as The Cow. National Astronomical Observatory of Japan
SHARE

A mysterious stellar explosion has given scientists a window into the source of certain massive, short-lived supernovae.

The explosion in question, procedurally named AT2018cow–and lovingly referred to as “the Cow”–flashed like a supernova in June of 2018. But it lasted much shorter than normal supernovae, and it emitted different colored light, making it what astronomers call a “fast blue optical transient.”

Such events are fleeting and consequently easy to miss. Where a typical supernova develops for a month or two and fades over a few more months, these objects “go up in less than a week” and “disappear in less than a month,”says Dheeraj Pasham, an astrophysicist at MIT and lead of a new study on the Cow published in the journal Nature Astronomy this week. These swift explosions are difficult to catch with most astronomical surveys, which may only re-scan the same area of the night sky once a month—too slow to catch an event that lasts a few weeks.

But recent advances in telescope technology have allowed for much faster scans—sometimes even catching multiple views of the same patch of sky per night, he says. Luckily, the Cow was “identified at the right time,” Pasham says. Astronomers realized it was there just days after it appeared. Around the world, researchers trained all kinds of fancy telescopes on it, examining it across optical, ultraviolet, x-ray, radio, and other frequencies of light.

At 100 times brighter than a typical stellar explosion, the Cow is one of the brightest of these strange supernovae. In an average supernova, a star runs out of fuel, collapses in on itself, and bursts in a massive explosion. The Cow and the few blasts like it are so extreme that scientists can’t explain them through these mechanisms alone.

“There must be some additional source of energy” to bridge the huge difference in brightness between these and standard supernovae, Pasham says. As for where this extra boost comes from, there are a plethora of ideas.

One possibility, which isn’t far off from a standard supernova, is that the core of the star collapsed and formed a rotating neutron star with a strong magnetic field, called a magnetar. The rapid spin of this magnetar could have transferred energy to the huge blast astronomers observed.

Similarly, the core of the star could have formed a black hole, causing the outer layers of the star to fall into it, which also would emit a lot of energy, potentially explaining the larger boom.

Other hypotheses have been floated in the past, too, such as a collision between two white dwarfs or a black hole ripping apart one white dwarf with its overwhelming gravity. But Pasham’s team seems to have ruled out causes that don’t involve a neutron star or black hole, says Cosimo Inserra, an astrophysicist who studies supernovae at Cardiff University in the UK and was not involved with the study.

“There is still no smoking gun” that reveals what happened, Inserra says, but the study of the x-ray signal was “extremely thorough” and ruled out many possible explanations. At present, every possible explanation for the Cow seems to have some issue with it, he says. For the neutron star explanation, he says the x-ray signal should have slowed down over the course of 60 days, but didn’t. A black hole might be that stable, but has never been observed to behave like this before, he says.

The energy of a compact object, meaning a black hole or neutron star, plus another unknown factor may have resulted in the explosion, Inserra says. For instance, the star could have been surrounded by a shroud of matter. Once the star exploded, its remnants would have ploughed through the cloud, producing a bigger flash. Or the exploding star could have been in orbit with another object, adding to the bang.

Pasham and his colleagues say they are convinced a black hole or neutron star was involved, based on their x-ray measurements from the explosion using NASA’s Neutron star Interior Composition Explorer (NICER), an instrument on the International Space Station. Currently, Pasham notes, no other tool acquires data quick enough to capture this kind of x-ray signal.

This study, paired with several prior ones, has provided the “nail-in-the-coffin evidence that it is indeed, a compact object,” Pasham says.

The brightness of the Cow’s x-rays changed over time—brightening and dimming—in a cycle that lasted 4.4 milliseconds long. To Pasham, this looks like a sign that matter is closely orbiting a “newborn” black hole or a type of neutron star called a magnetar, and the matter shines with x-rays each time it completes a quick orbit.

Currently, the research team can’t tell whether a black hole or magnetar caused the cycle they observed. Doing so will require a “huge amount of computation power,” Pasham says, which the team is now seeking.

With so many future sky surveys in the works, Pasham is confident astronomers will detect many more of these objects. “This,” he says, “is just the beginning.”