This could be a brand new type of supernova 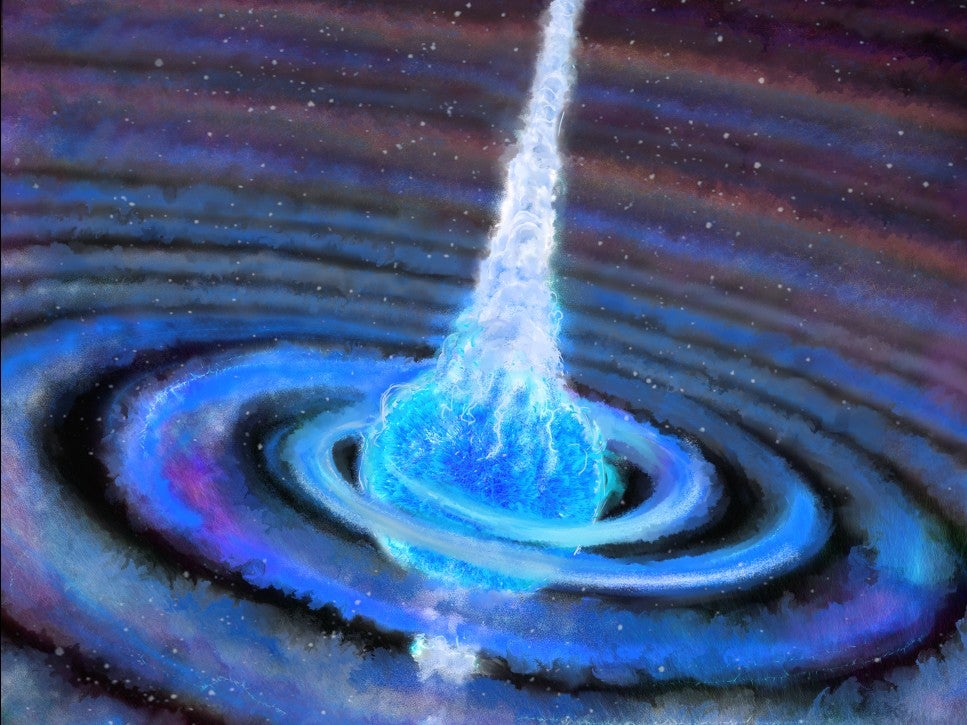 A compact object (a black hole or neutron star) at the core of its massive stellar companion. Rapid accretion onto the compact object has caused it to form an accretion disk and launch a pair of jets at nearly the speed of light. Those jets have tunneled through the star, which is about to explode in a supernova due to the enormous amount of energy released. Chuck Carter
SHARE

The authors of a new study believe they may have detected a rare type of supernova triggered by the merging of a star and either a black hole or a neutron star. This particular supernova was unique because a merging of the two objects could have caused its premature death—a phenomenon that’s been theorized but never actually witnessed.

The supernova emitted an unusually strong radio signature, which the researchers took as evidence that the star had shed some of its mass into the surrounding space before it exploded, presumably from the merging of the two bodies. Later, in the throes of its dramatic end, the star’s remnants collided with this drifting starstuff and produced the radio waves.

Typically, stars explode into a supernova when changing conditions inside the star sap “the pressure support that’s maintaining the core against … gravitational collapse,” says David Vartanyan, an astrophysicist at the University of California at Berkeley, who was not involved in the study.

Stars primarily fuse hydrogen into helium for power. But when the hydrogen is exhausted, they begin fusing helium, and proceed toward heavier and heavier elements. As large stars run out of elements they can use as fuel, their cores collapse inward, then explode in a massive blast called a supernova, which leaves behind a super dense object—either a neutron star or a black hole.

Large stars will go nova shortly after they begin fusing iron, which returns no energy to the star. But for smaller stars, this can occur when they burn “lighter elements like oxygen, magnesium, or neon,” Vartanyan says.

When stars explode, they release an enormous amount of energy in many different wavelengths of light. During a supernova, “one exploding star outshines 10 billion stars—that’s amazing,” says Ken Chen, an astrophysicist who studies supernovae at Academia Sinica in Taipei, Taiwan, who also wasn’t involved in the study.

The study, which was published in the journal Science, explored a radio signal the team obtained from the Very Large Array Sky Survey catalog. The signal appears to show the supernova of a binary system containing a star that ejected a cloud of its own mass only a few hundred years prior to the explosion, which is a very short time in the life of stars, Vartanyan says. So that “narrow window” is what “made this object so unique,” he says. The ejection occurring shortly before the explosion is what suggests a merger could have occurred.

The team also corroborated their finding with an archived x-ray signal that appeared in the same region of sky. The signal was recorded by an instrument on the International Space Station called the Monitor of All Sky X-ray Image (MAXI).

This makes for convincing evidence that a supernova did occur there, but the key question of how exactly a merger would accelerate the supernova process is still rife with uncertainties, Vartanyan says.

He thinks it’s possible that a merger triggered this star’s core collapse, but he leans more toward another possible explanation, which the authors acknowledge in their paper: Binary mass interactions, or mass exchange between stars.

[Related: An amateur astronomer accidentally caught an exploding star on camera—and it gets better]

When two stellar objects orbit each other (called a binary star system), mass from one object can get pulled away by the other—except sometimes not all of that mass makes it to the other star. If that were the case for this particular supernova, the ejection of mass shortly before the explosion may have just been a coincidence. The drifting matter would still cause the radio signal the team detected, even if it wasn’t caused by a merger. It’s also possible, though, that the mass transfer itself disrupted the core of the star and triggered the supernova, Vartanyan says.

Chen also isn’t fully convinced a merger was the cause of the drifting matter and resulting strange radio signal. But the finding itself is wonderful because of how unique it is, he says.

Even if this supernova weren’t caused by a merger, this research could spark other interesting lines of inquiry around mergers, Chen explains. These celestial unions are becoming increasingly important to study thanks to the blooming field of gravitational wave astronomy; mergers of neutron stars and black holes are the biggest source of gravitational waves.

Supernovae may be dying stars, but their remains are taken in by new generations of stars and create many of the elements necessary for life, including those that make up the Earth and moon, Chen says. Supernovae don’t only “destroy, but they also create.”