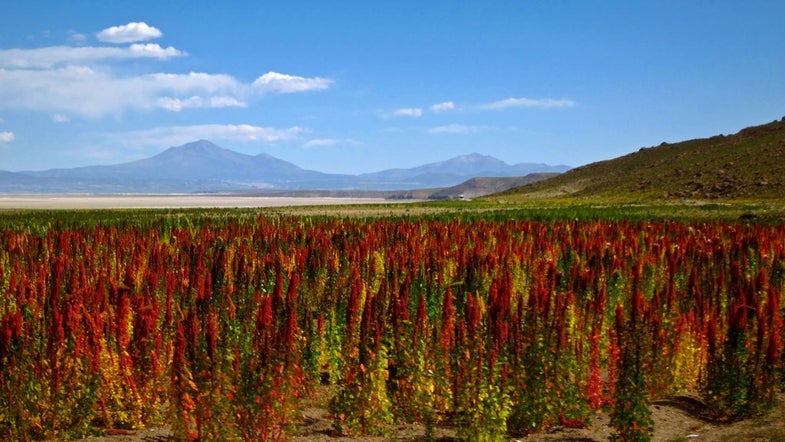 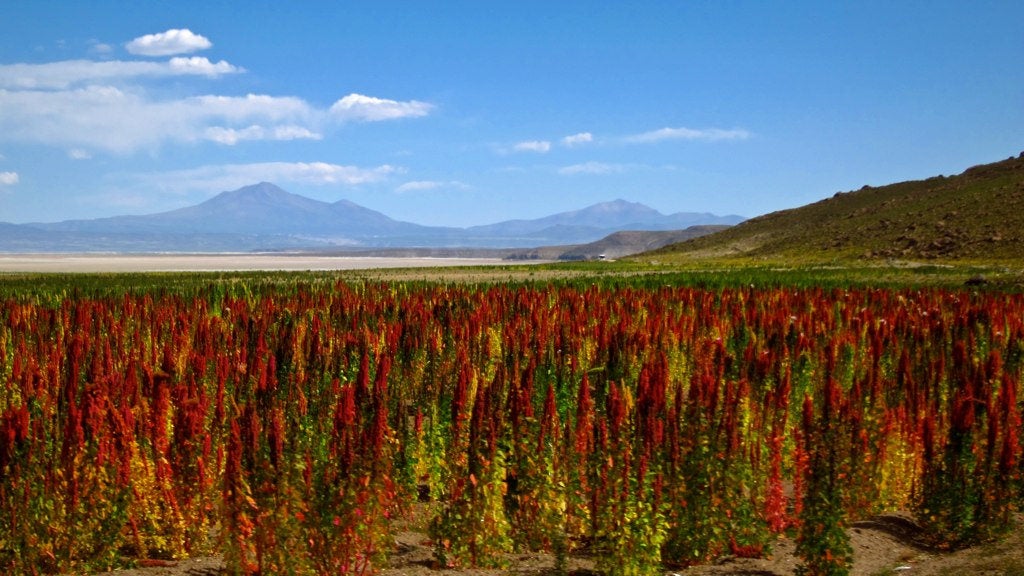 A striking sea of red and yellow.

Hailed as the King of grains, quinoa doesn’t need more hype to cement its position as a superfood in the American supermarket. But now scientists have a hold of quinoa’s real identity—and what underlies the grain’s nutritious profile —thanks to its newly-sequenced genome.

“There are a lot of things that can be done to improve quinoa. And understanding the genome of it is the first step,” says Mark Tester, the leader of an international team that just published the first genome sequence of quinoa in Nature.

Tester, a plant scientist at King Abdullah University of Science and Technology, originally started studying quinoa to investigate the grain’s salt tolerance. “Quinoa is an amazing plant. It could grow beautifully in very difficult environments, like the Middle East [or] Northern Sahara, where you have salty soil and salty irrigation water,” says Tester. He and his colleagues planned to figure out how quinoa tolerates the salt, then transfer that tolerance to other crops like rice and barley so they too can thrive in less desirable soils.

Quinoa is different from rice and barley. It is still mainly grown by hand in South America. It serves as a staple crop for nearly a million people, but modern agriculture has not yet touched quinoa fields in the highlands of Bolivia, Ecuador, and Peru. The appearance of the quinoa plant reflects that: the grain grows tall and fragile.

Recognizing quinoa’s potential to provide food in marginal lands, Tester hopes to change those traits—making quinoa shorter and more compact—so it’s easier to grow on large modern farms. “[The goal is to] move this crop from its current status as a crop of importance in South America, and a crop of novelty in the West, to become a true commodity in the world,” says Tester.

In other words, he says, “I want it out of the health food section.”

To improve quinoa and achieve that goal, Tester needed to sequence the quinoa genome. Having a genome sequence—the complete assortment of genes that make up an organism—will provide scientists with a basic blueprint for future breeding efforts, just like researchers did with rice in 2005.

In collaboration with scientists from the United States, Germany and Australia, the team produced high-quality genome sequences of different quinoa varieties.

“The assembly is very good. It’s right up there with the standards of other major commodity genomes that have been published before in Nature and other journals,” says Joshua Udall, a plant and wildlife scientist at Brigham Young University. “It will be a good resource for quinoa workers and also the scientific community in general.”

In addition to sequencing quinoa’s genome, the authors also pinpointed the evolutionary history of quinoa. “[The authors] resolved the mystery to a certain extent,” says plant evolutionary genomicist Jonathan Wendel from Iowa State University. “They shed light on who the best models are of the parents, and how long ago those parents hybridized to give rise to what nowadays is the modern quinoa plant. It will serve as a reference for everybody’s work from now on.”

There are many potential agricultural applications for the new research. The study authors have already identified one gene that they believe makes quinoa bitter by prompting the production of a chemical called saponin.

On small farms, saponin could be used to naturally reduce predation from birds. But saponin is not only bitter. It’s also toxic, and removing it requires a lot of work and water. So for the “net benefit of the environment,” says Tester, breeders might want to grow quinoa with low saponin. But first, more work is needed to confirm that they’ve found the right gene to tinker with. Traditionally, such studies have been hard to fund.

“Most of the countries that use quinoa for [food] don’t have the scientific infrastructure to make any improvement in the genetics of quinoa. But in the US, it’s not a commodity crop, or even an orphan crop, so many of the federal agencies really have no interest in funding it,” says Udall. “Understandably so, as science funding is in short supply for every plant or crop.”

“I was really excited about [quinoa], and it has many unique properties. But it’s hard to keep our research program going because of the lack of domestic attention,” says Udall. “That might be changing now with this Nature article.”

Udall believes that “a lot of breeding and a lot of improvements can happen as modern agriculture uses [quinoa] in places that have great soil.” It’s just that “some adaptation has to happen before quinoa can be widely grown throughout the world.”

So Tester’s plan to bring quinoa out of the health food section is not a long shot. “I’d like to see quinoa changed into a crop that can be grown much more widely and become much cheaper,” Tester says. “I want the price to come down by a factor of five.”