An extreme particle accelerator millions of light-years away is directing immensely fast electromagnetic waves at Earth. 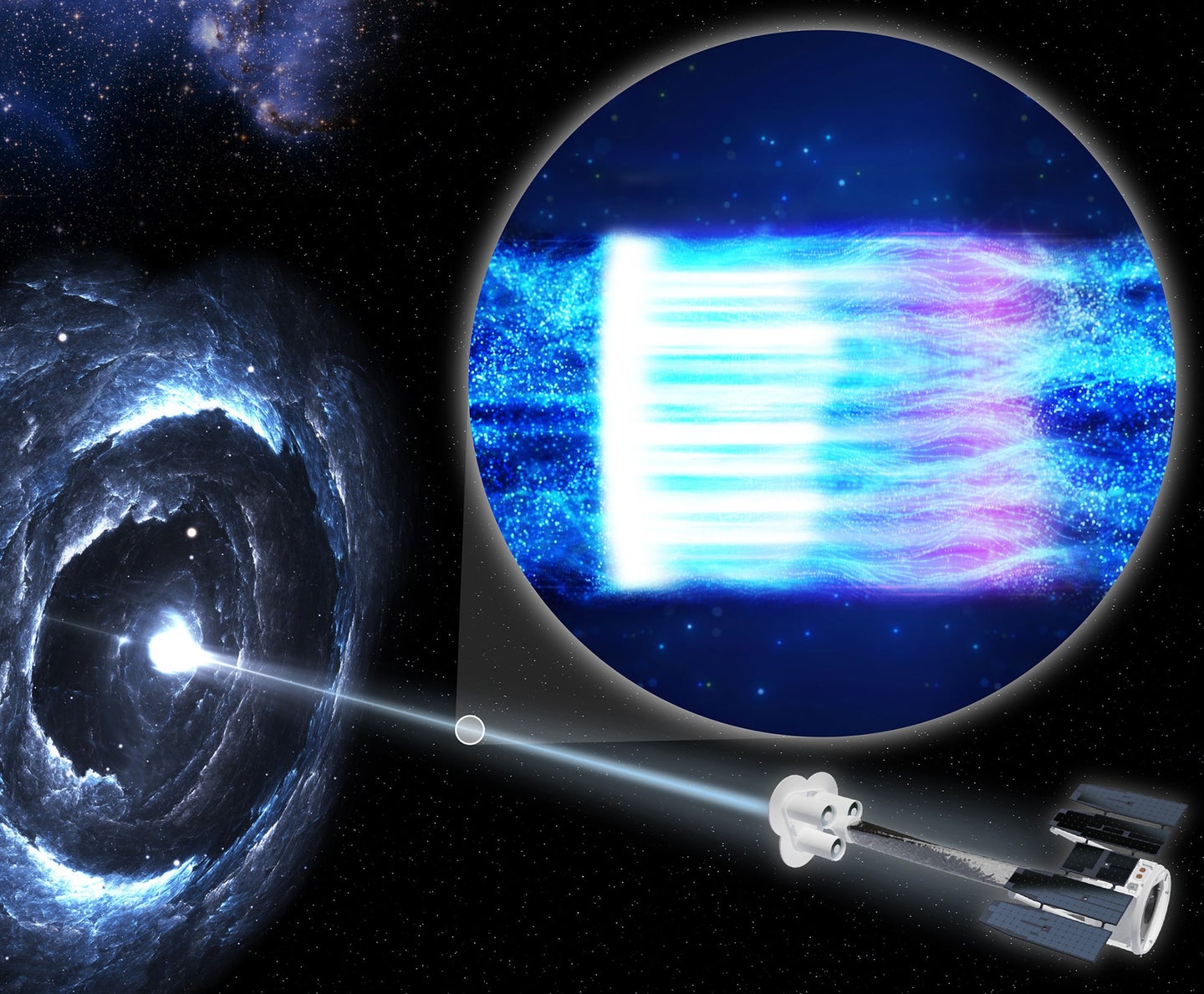 Some 450 million light-years away from Earth in the constellation Hercules lies a galaxy named Markarian 501. In the visible-light images we have of it, Markarian 501 looks like a simple, uninteresting blob.

But looks can be deceiving, especially in space. Markarian 501 is a launchpad for charged particles traveling near the speed of light. From the galaxy’s heart erupts a bright jet of high-energy particles and radiation, rushing right in Earth’s direction. That makes it a perfect natural laboratory to study those accelerating particles—if only scientists could understand what causes them.

In a paper published in the journal Nature today, astronomers have been able to take a never-before-seen look deep into the heart of one of those jets and see what drives those particles out in the first place. “This is the first time we are able to directly test models of particle acceleration,” says Yannis Liodakis, an astronomer at the University of Turku in Finland and the paper’s lead author.

Markarian 501 is a literally shining example of a special class of galaxy called a blazar. What makes this galaxy so bright is the supermassive black hole at its center. The gravity-dense region spews a colossal wellspring of high-energy particles, forming a jet that travels very near the speed of light and stretches over hundreds of millions of light-years.

Many galaxies have supermassive black holes spew out jets like this—they’re what astronomers call active galactic nuclei. But blazars like Markarian 501 are defined by the fact that their jets are pointed right in Earth’s general direction. Astronomers can use telescopes trained at it to look upstream and get a clear view of a constant torrent of particles riding through waves of every part of the electromagnetic spectrum, from bright radio waves to visible light to blazing gamma rays.

[Related: You’ve probably never heard of terahertz waves, but they could change your life]

A blazar can spread its influence far beyond its own corner of the universe. For instance, a detector buried under the Antarctic ice caught a neutrino—a ghostly, low-mass particle that does its best to elude physicists—coming from a blazar called TXS 0506+56. It was the first time researchers had ever picked up a neutrino alighting on Earth from a point of origin outside the solar system (and from 5 billion light-years away, at that).

But what actually causes a supermassive black hole to form light and other electromagnetic waves? What happens inside that jet? If you were surfing inside of it, what exactly would you feel and see?

Scientists want to know these answers, too, and not just because they make for a fun, extreme thought experiment. Blazars are natural particle accelerators, and they’re far larger and more powerful than any accelerator we can currently hope to build on Earth. By analyzing the dynamics of a blazar jet, they can learn what natural processes can accelerate matter to near the speed of light. What’s more, Markarian 501 is one of the more desirable blazars to study, given that it’s relatively close to the Earth, at least compared to other blazars that can be many billions of light-years farther still.

[Related: What would happen if you fell into a black hole?]

So, Liodakis and dozens of colleagues from around the world took to observing it. They used the Imaging X-ray Polarization Explorer (IXPE), a jellyfish-like telescope launched by NASA in December 2021, to look down the length of that jet. In particular, IXPE studied if distant X-rays were polarized, and how their electromagnetic waves are oriented in space. The waves from a light bulb, for instance, aren’t polarized—they wiggle every which way. The waves from an LCD screen, on the other hand, are polarized and only wiggle in one direction, which is why you can pull tricks like making your screen invisible to everyone else.

Back to the sky, if astronomers know the polarization of a source like a black hole, they might be able to reconstruct what happened at it. Liodakis and his colleagues had some idea of what to expect, because experts in their field had previously spent years modeling and simulating jets on their computers. “This was the first time we were able to directly test the predictions from those models,” he explains.

They found that the culprits were shockwaves: fronts of fast-moving particles crashing into slower-moving particles, speeding them along like flotsam pushed by rushing water. The violent crashes created the X-rays that the astronomers saw in IXPE’s readings.

It’s the first time that astronomers have used the X-ray polarization method to see results. “This is really a breakthrough in our understanding of these sources,” says Liodakis.

In an accompanying perspective in Nature, Lea Marcotulli, an astrophysicist at Yale University who wasn’t an author on the paper, called the result “dazzling.” “This huge leap forward brings us yet another step closer to understanding these extreme particle accelerators,” she wrote.

Of course, there are still many unanswered questions surrounding the jets. Do these shockwaves account for all the particles accelerating from Markarian 501’s black hole? And do other blazars and galaxies have shockwaves like them?

Liodakis says his group will continue to study the X-rays from Markarian 501, at least into 2023. With an object this dazzling, it’s hard to look away.