Ask Us Anything: Why Don’t Electric Eels Electrocute Themselves? [VIDEO] 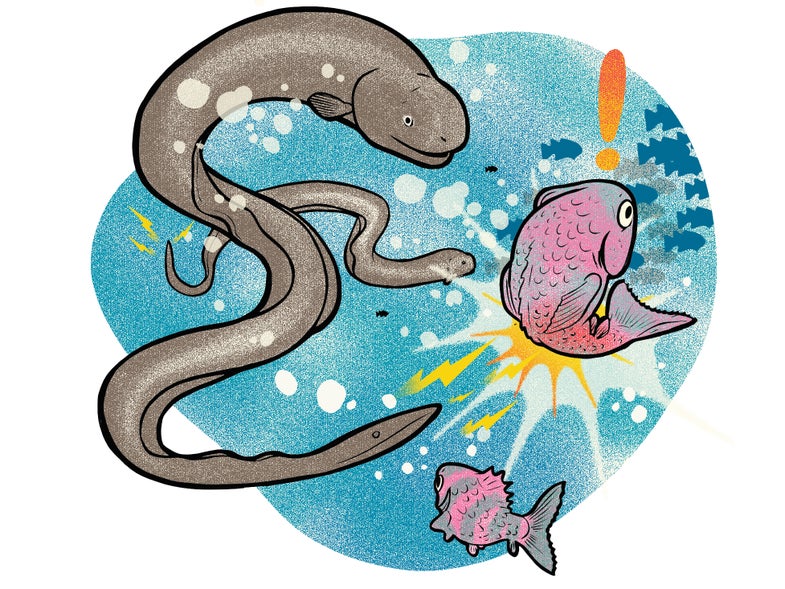 The electric eel is a variety of freshwater fish with specialized organs that discharge electricity. Many species use these jolts to sense their surroundings or communicate (as in courtship). A few species, including electric eels, electric rays, and electric catfish, can emit enough juice to stun other fish, yet they never seem to shock themselves.

Body size may be key: An electric eel can grow to eight feet long and weigh as much as 50 pounds, making it orders of magnitude bigger than its victims. The charge it delivers–up to 650 volts–would cause much less damage to the eel itself.

Out of water, however, an electric fish may be more susceptible to its own power. Jason Gallant, a zoologist at Michigan State University, has heard that electric eels spasm when pulled from the water. That’s probably because their charge doesn’t readily dissipate through air. Instead, it travels across the fish’s wet skin, delivering a more concentrated shock. Also, Gallant’s team found that several groups of electric fish express the same genes, which encode structural proteins that could insulate their electric organs.

These are all just speculations, though. In truth, no one really knows why electric eels don’t shock themselves. Vanderbilt neuroscientist and electric eel expert Ken Catania calls the fish “optimized biological Tasers–and I’m not just trying to spin it so it sounds cool.” But he says their ability to zap a foe without getting zapped remains a mystery.

Animals
Ask Us Anything
april 2015
ask anything
eels
print