Every December since 2004, engineers have flown to the South Pole to drill 8,000-foot-deep holes in the ice. The team... 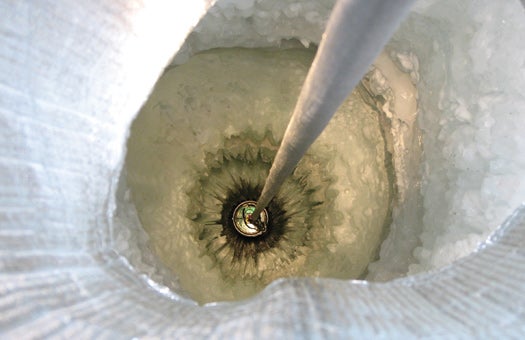 Every December since 2004, engineers have flown to the South Pole to drill 8,000-foot-deep holes in the ice. The team lowers cables, each strung with 60 disco-ball-size light sensors, into the holes and let them freeze over. So far they have completed 79 such holes, set in a grid half a mile on each side, and plan to drill the final seven this month. The result will be the IceCube Neutrino Observatory, a cube of ice packed with 5,320 sensors looking for cosmic particles.

Neutrinos are subatomic particles created by radioactive decay or nuclear reactions. Like other types of extrasolar radiation, they emerge from energetic cosmic events and constantly bombard Earth. Neutrinos are unique among cosmic particles, however, in that they carry no electric charge. The magnetic fields of stars and planets bend the paths of charged particles, making it impossible for scientists to identify their origin. But neutrinos fly in a straight line: Catch one, and you can trace it back to whatever produced it, which makes them one of the easiest means of probing the far reaches of the universe.

Detecting a neutrino, however, is a bit like trying to catch a flea with a fishing net—the particles are so small that trillions of them travel through Earth every second without even hitting an atom. So the researchers at IceCube employ a clever technique to spot indirect evidence of neutrinos. 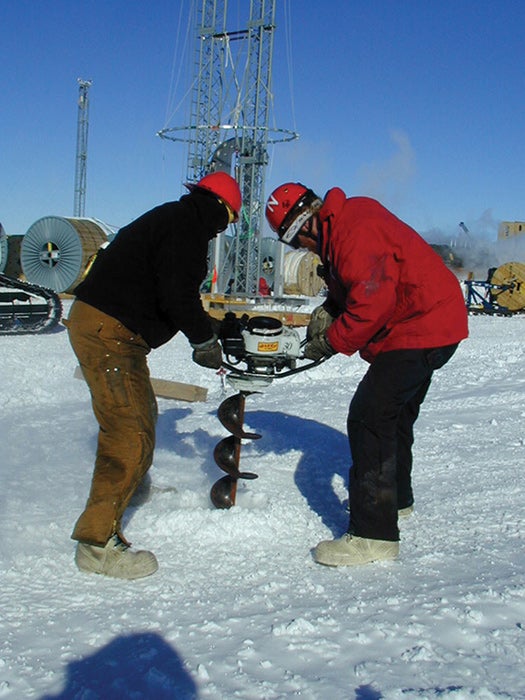 Every day, several dozen neutrinos passing through IceCube will hit a hydrogen or oxygen atom in the ice and eject another particle, called a muon, that emits a blue light. In Antarctica’s nearly pure ice, the photo sensors can spot such a flash a football field away, and with dozens of sensors registering each muon, scientists can triangulate the neutrino’s exact path through the ice and extrapolate it to its source.

IceCube’s size allows it to measure ultra-high-energy neutrinos, particles that pack as much energy as one of Roger Federer’s serves, says Spencer Klein, a physicist at Lawrence Berkeley National Laboratory who will monitor IceCube’s output. The sources of these neutrinos, he says, are mysterious. The main suspects are super-massive black holes that spit intense jets of particles, or collisions involving a neutron star and a black hole. “Or maybe something unknown,” Klein says. “It’s hard to explain how you get such energetic particles, but it’s clear that they exist.”

The unknown something, he says, could be dark matter, the invisible mass that makes up 90 percent of the universe. The existence of dark matter was proposed in 1933, but scientists still know very little about what it is or how it acts. One theory is that it consists of weakly interacting particles. If enough of these particles congregate, they might annihilate one another and produce a burst of neutrinos, which IceCube could detect to help reveal some characteristics of dark matter. If the neutrinos originate from the Earth or sun, it would confirm that dark-matter particles exist and that they are attracted by gravity. And if the sun emits relatively more neutrinos than Earth, that’s an indication that dark-matter particles interact more strongly with hydrogen, which provides insight into the matter’s quantum behavior.

Once IceCube’s final seven strands of sensors are in place, it will detect 100 neutrinos a day, 14 times as many as the two-year-old French neutrino detector Antares. IceCube will not only help scientists identify the source of cosmic rays, dark matter and other objects that influence the universe’s evolution, it will produce unexpected discoveries, says Francis Halzen, the principal investigator on Ice Cube. From Galileo’s refracting spyglass to the Hubble Space Telescope, he notes, every time scientists turn a higher-fidelity tool to the cosmos, they find something new. “If IceCube observes separated pairs of particles, they might be supersymmetric, a new and very different type of matter,” Klein says. “That would be extremely exciting.”