Video: The Milky Way and Andromeda Crash Together

No galaxies were harmed in the creation of this simulation 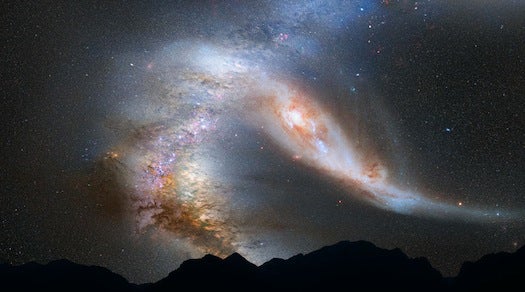 First, the bad news: In four billion years it’s going to get a lot more crowded around here. The Milky Way and Andromeda galaxies are on a collision course. The good news is that a new video from NASA shows how it’ll go down.

It’s been suggested for some time that the two galaxies might have it in for each other, but today NASA says they can “predict with certainty” that Andromeda, which is still 2.5 million light years away but heading toward us at 250,000 miles per hour, will collide with the Milky Way because of the mutual pull of their gravity.

The two galaxies have enough space between them that any direct collision of heavenly bodies is unlikely. But the Sun won’t be getting off so easy; it’ll probably be flung into another part of the galaxy.