Video: To Hunt Comets, NASA is Building a Giant Harpoon 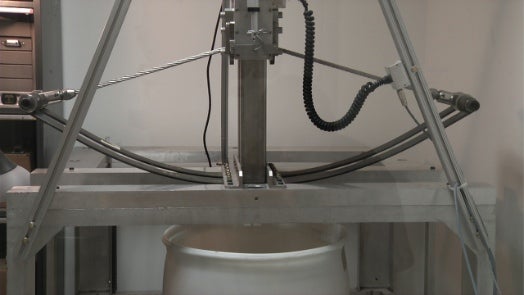 In Kepler, NASA has an exoplanet hunter. In the Curiosity rover, the space agency has finely tuned mechanism for tracking down geological signs of past life on Mars. It even has an asteroid hunter capable of chasing down hurtling chunks of rock from millions of miles away. Now, NASA wants a comet hunter. Literally. In a lab at NASA’s Goddard Space Flight Center in Maryland researchers have constructed a massive crossbow in which they are testing huge harpoons that they hope will one day blast through the surface of a speeding comet.

The overarching idea: to fly a spacecraft close enough to a comet that it can fire a harpoon into the comet’s surface, acquire material samples from within it, and recover the samples to the spacecraft for return to Earth. But before they can do that, researchers have to prove that their harpoon will work. That’s why in a closet-sized lab space at GSFC there sits a six-foot-tall crossbow–it’s technically a ballista, a siege weapon invented by the ancient Greeks to hurl large missiles at their foes–made from a pair of truck leaf springs and equipped with a half-inch-thick steel bowstring.

The ballista is positioned pointing downward for obvious reasons. It’s bowstring is pulled back mechanically to create up to 1,000 pounds of force, which can launch projectiles upwards of 100 feet per second. It’s here that GSFC researchers are firing various harpoon designs into 55-gallon drums of simulated comet material (usually some mix of pebbles, salt, sand, or the like) to see what sticks–and what doesn’t.

It’s the first phase of a long design project aimed at proving that harpooning a comet and returning the samples to Earth is feasible. That Japanese space agency JAXA has succeeded in returning asteroid samples to Earth and NASA’s Stardust has collected samples from the tail of a comet, but researchers really want to see what’s inside. That’s where they might find a bit of the “primordial ooze” that could’ve seeded life on this planet millions of years ago through comet strikes here on Earth.

But landing on a comet and drilling core samples isn’t so easy. Unlike large asteroids, comets exert very little gravity and are basically just huge chunks of ice and dust leftover from the solar system’s formation. In order to land a spacecraft on one, NASA would likely have to somehow tether a spacecraft to the comet and pull itself onto the surface. In other words, it would need a harpoon of sorts anyhow. The idea here is to simply go ahead and make the harpoon the subsurface sampling device, circumventing the need to actually land.

To do so, GSFC researchers are trying to figure out and demonstrate the best tip designs, cross-section, ideal velocities, and explosive charges to propel the harpoon (the actual mission wouldn’t pack a crossbow, but some kind of chemical propellant to launch the harpoons). Once it has penetrated the surface, researchers need to show their harpoon can gather a sample, detach (probably leaving the tip behind), and ferry the sample back up to the spacecraft. And they will have to demonstrate the ability to do this in a variety of possible materials, because there’s no way to know what the comet’s composition will be like until the spacecraft gets there.

It’s an ambitious project, and it starts with a huge ballista sitting in a closet at Goddard.