America’s space shuttles may be settling into their retirement roles as national artifacts, but for space fans who miss their... 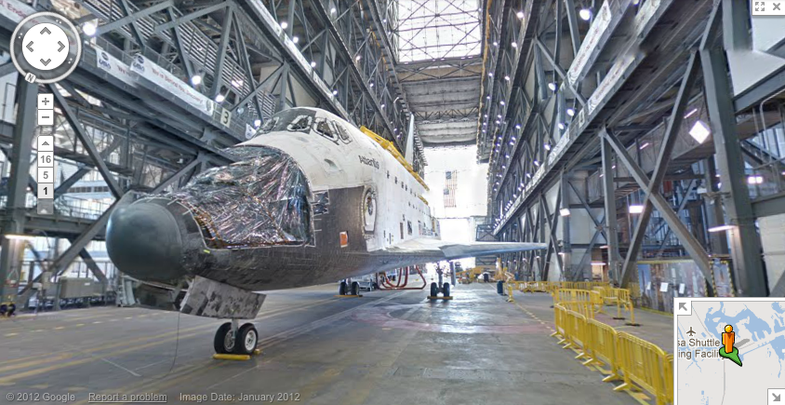 America’s space shuttles may be settling into their retirement roles as national artifacts, but for space fans who miss their presence at Kennedy Space Center, Google has a new offering — Street View images of the entire complex, shuttles and all. The web giant unveiled the new images this morning, and we have a preview.

Google brought its Street View fleet to the KSC in January while the shuttles were being decommissioned, and snapped 6,000 panoramic images of two orbiters (Atlantis and Endeavour), the launch pads, the massive Vehicle Assembly Building, even the runway where the shuttles landed.

“It’s not stuff that any normal person would get to see,” said Ryan Falor, product manager for Street View Special Collections. “You can go underneath the shuttles and you can see the tiles, these really sort of fragile heat tiles, and you can look up at them. They look like they are almost close enough to touch.”

The project took about a week, with NASA engineers and managers working with Google to ensure no secret space assets made their way into the field of view.

Here’s the view from the top of launch pad 39A:

Below is Space Shuttle Endeavour. Click here to see Space Shuttle Atlantis. You can also see some more images in the video at bottom.

Or just navigate in Google Maps, and you can go inside the gigantic Vehicle Assembly Building and peer down from the 15th floor; you can meander down the road the shuttle crawler would inch along toward the launch pad; you can even walk down the gantry astronauts would use to board the shuttle cockpit. The whole experience offers some unique vantage points the public would otherwise never see, Falor said. It also presents some surprises, like the bathroom right at the top, which astronauts referred to as “the last bathroom on Earth.”

“It has this sign that says ‘close before launch,’ which I just thought was really funny, imagining someone up there,” Falor said. “That’s the fun of Street View — it’s this immersive experience, where you can say, ‘Wow, I didn’t realize it looked like that.'”

He was also impressed by humongous water nozzles at the base of the launch pads, which were used for noise suppression when the shuttles’ main engines fired up. NASA called them “rain birds,” like the sprinkler system, only ginormous.

“You can walk around them and imagine how much water is shooting out of this thing. It’s one interesting technical thing to explore that normally isn’t visible,” Falor said. 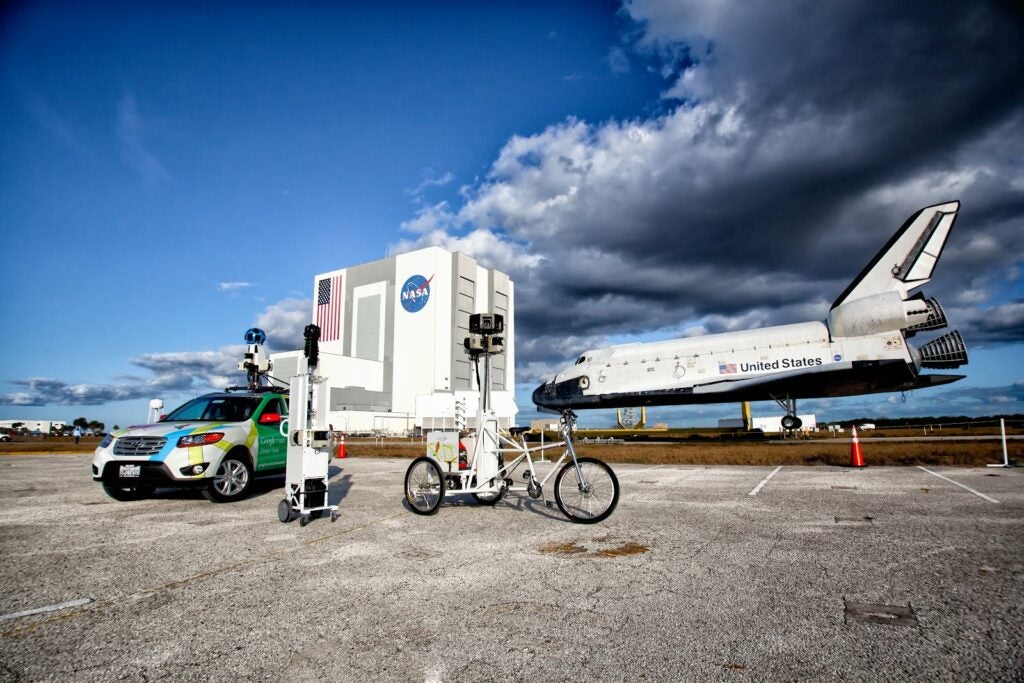 If he sounds enthusiastic, he is — Falor used to work on the Mars Phoenix and Mars Exploration Rover missions at the Jet Propulsion Laboratory, and left for Google before work started on the Mars rover Curiosity. But his soft spot for space exploration stayed with him, prompting this Street View project.

Street View is now available on all seven continents (despite some protest in Europe), museums, the White House, even the jungles of the Amazon. The KSC is the first major government facility, aside from the museum-y parts of the presidential mansion, to get Street Viewed, Falor said.

“We are excited about how users will be able to explore all this stuff, and maybe we can inspire the next generation of people to get interested in math and science,” he said.