8.1 magnitude earthquake is one of the strongest to ever hit Mexico

And a hurricane may be on the way. 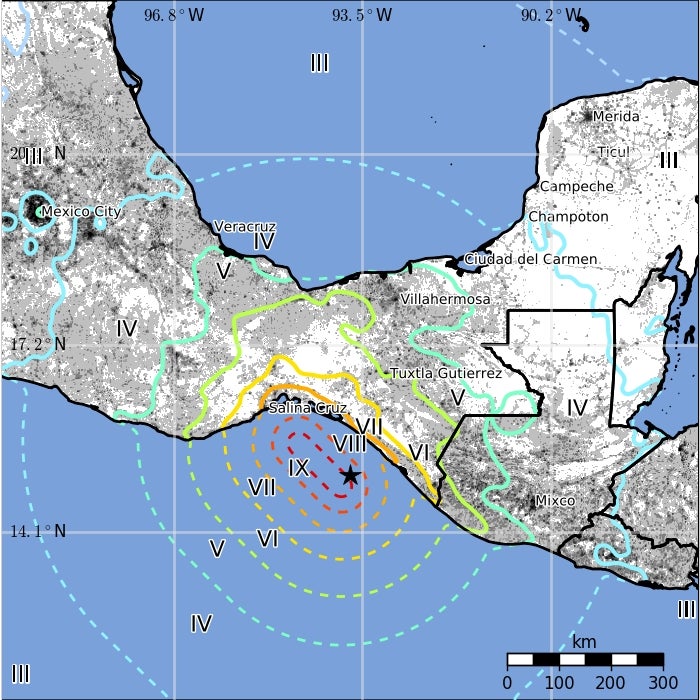 A massive magnitude 8.1 earthquake struck Mexico just before midnight on Thursday. The quake—widely considered to be among the strongest to ever hit the country—originated deep in the Earth off the southwest coast.

“Anytime you get something like a magnitude 8 you’re in what’s ironically called ‘great earthquake’ territory,” says Arthur Lerner-Lam, deputy director of Columbia University’s Lamont-Doherty Earth Observatory. “These are the earthquakes that are the most damaging. They release enormous amounts of energy relative to those that are lower on the magnitude scale, and If they are located near populations, the chances for severe casualties or extraordinary damage are very high.”

Shaking was strongest closest to the origin in the states of Chiapas and Oaxaca, but monuments and street lamps swayed as far away as the capital, Mexico City, 457 miles to the northwest. The area is predominantly rural and mountainous, so getting precise numbers of fatalities or economic losses will take some time. As of this writing, at least 32 people are confirmed dead, but it is extremely likely that the number of fatalities will rise as rescue crews respond to the quake.

Like most large earthquakes, this latest one occurred because of plate tectonics. The Earth’s crust—what we think of as the solid ground beneath our feet—is divided into tectonic plates. These plates overlay the more mobile and molten interior of our planet, and they move around over time, like floats in a pool. It’s a crowded pool though, and these plates are constantly jostling each other for space.

“The vast majority of great earthquakes occur on what we call subduction zones, places where oceanic and continental plates are colliding and the oceanic plate is is essentially diving underneath the adjacent continent,” Lerner-Lam says.

In this case, the Cocos plate (a small oceanic plate) is diving under North America at about three inches per year. Sometimes the plates get stuck for a while, and pressure builds. When it finally releases, the result can be a major earthquake. But that’s not quite what happened this time.

“This earthquake actually looks even more complex than what we’d expect,” Lerner-Lam says. The motion that researchers detected wasn’t simply the Cocos plate burrowing under North America. Instead, the break that caused this earthquake seems to have stemmed from a bend in the plate near that intersection moving at a different angle, getting pulled apart in what’s called a normal fault.

Responding to the earthquake may prove difficult, not only because of the terrain, but because Mexico is facing another natural disaster; Hurricane Katia is brewing on the country’s Gulf coast. Though the timing is unfortunate, there is absolutely no evidence that the recent string of hurricanes in the Caribbean is in any way related to this event.

“There’s no relationship between what we’re seeing in the Atlantic basin and what’s happening off the coast of Mexico in terms of earthquakes,” Lerner-Lam says. “There are some places where we think that very localized heavy rainfall in the vicinity of an active very shallow fault could saturate the fault and lower the friction, but that’s not what happening here.”

Seismologists like Lerner-Lam are eager to learn more about the underlying causes of great earthquakes.

“We worry very much about these subduction zone events, and it would be wonderful if we could begin to anticipate them,” Lerner-Lam says. He and others around the world are working on developing and deploying more sensitive earthquake monitoring systems, including some that can be deployed on the ocean floor near subduction zones.

By getting a better understanding of how these giant earthquakes work, researchers hope that they can better inform governments and populations of risks that they should watch out for. Scientists might not ever be able to predict earthquakes, but they can help provide information that helps cities and individuals prepare for them.

In the case of this most recent earthquake, Mexico’s early warning system gave residents in areas further away up to about a minute of warning before the shaking started. Early warning systems are in place in Japan, Mexico, and a few other places. California is working on a similar system for the earthquake-prone state, but budget cuts have placed the plan in jeopardy.