New Discovery: An Earth-Scale Planet Orbits Alpha Centauri, The Closest Star System To Our Own

Meet our closest neighbor. The planet closely orbits Alpha Centauri B, which is a little bit smaller than the sun. 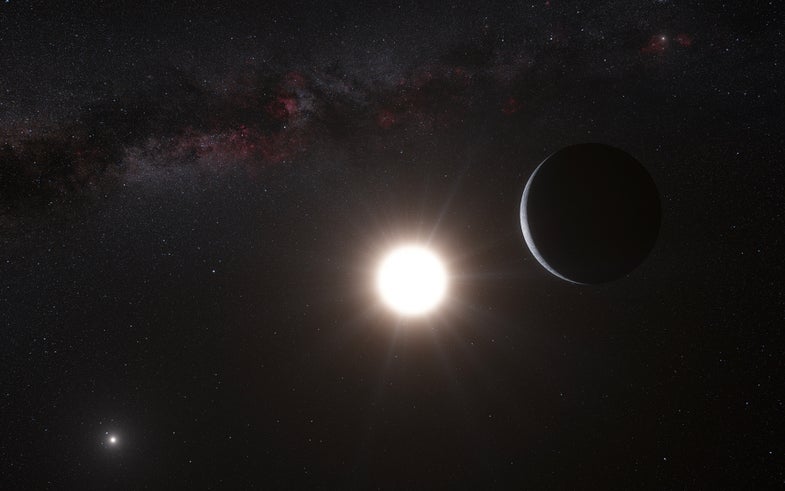 An Earth-mass planet has been spotted orbiting Alpha Centauri B, the closest star system to our own. ESO/L. Calçada
SHARE

The Alpha Centauri system, our closest interstellar neighbor and long the stuff of science fiction lore, harbors a planet about the size of the Earth. It whips around its star, Alpha Centauri B, every 3.2 days and is too close and hot to have any water. But it’s both the lightest world to orbit a sun-like star, and the closest exoplanet ever found to date–by a long shot.

Alpha Centauri is actually a binary system, with Cen A and Cen B each pretty close in size to our own star. There’s a third star, Proxima Centauri, which is associated with this system. Astronomers at the European Southern Observatory set their sights on the system because it’s likely to harbor planets, and because it would be very tricky to spot a planet there. They did it with a special spectrograph installed on the La Silla Observatory in Chile, and used the so-called wobble method, which measures tiny changes in a star’s radial velocity that are caused by planetary perturbations.

The planet is much closer to Alpha Centauri B than Earth is to the sun, so it’s not Earth-like, because it’s not habitable. Foundation Alpha it is not. Writing in Nature, the astronomers say their method could lead to plenty of other habitable-planet discoveries, however: “We are confident that we are on the right path to the discovery of Earth analogues,” they write. The paper will be published this week. [It was initially embargoed until Wednesday, but Nature allowed publication after a European news outlet broke the news early.]

It’s an important addition to the exoplanetary pantheon, but let’s be honest–this is amazing because this is Alpha Centauri. It’s so close to us at just four light-years away, and it figures so prominently in science fiction–that alone makes it an incredible discovery.