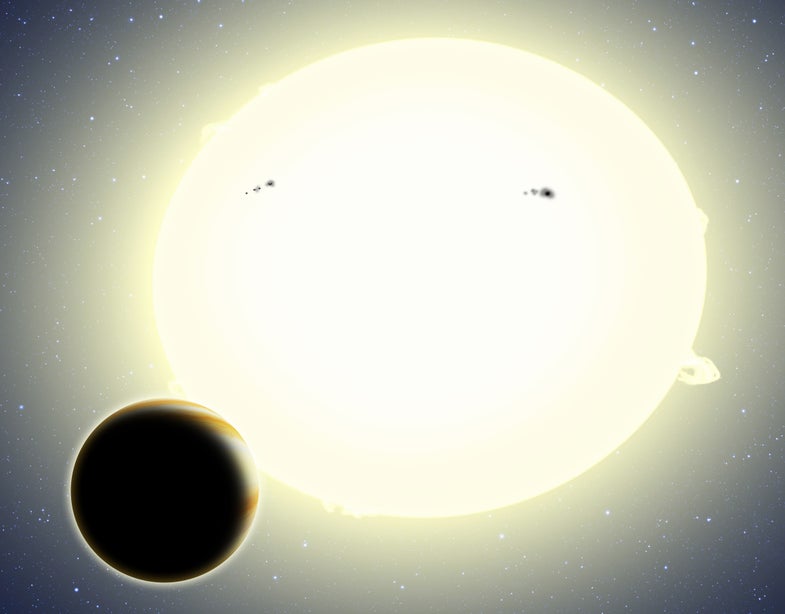 An artist's rendition of the newly discovered planet, Keplar-76b, and the star it orbits. The star has a slight elliptical shape that's been exaggerated in this illustration. David A. Aguilar (CfA)
SHARE

A different algorithm for discovering planets recently proved its mettle, identifying a new planet that’s like a bigger, hotter Jupiter.

A team of astronomers from Israel, the U.S. and Denmark discovered a new gas giant using a method originally proposed 10 years ago, based on Einstein’s theory of relativity. This is the first time they’ve used the method to find a planet.

The planet orbits a star in the constellation Cygnus, about 2,000 light-years away from Earth. It’s about 25 percent larger than Jupiter in diameter and twice as massive. It always presents the same face to its star, the way the moon always shows the same face to the Earth, so its star-facing surface is a piping 3,600 degrees Fahrenheit. Its formal name is Kepler-76b.

To find Kepler-76b, researchers looked for three effects predicted by Einstein’s theory of relativity. Two of the effects make the planet’s star seem brighter and dimmer at different times. The star brightens when the planet moves toward Earth, tugging the star with it. Relativistic effects focus the star’s light. The star then dims as it moves away from Earth.

The star also brightens when the viewers on Earth see it from particular angles. Kepler-76b pulls its star into a slight elliptical shape and when the ellipse’s long side faces viewers, it appears brighter. When Earth viewers see the ellipse’s pointy end, however, the star looks dimmer.

The third effect comes from starlight reflecting off the planet.

The team used data from NASA’s Kepler spacecraft to figure out when the star brightened and dimmed. Afterward, they confirmed that the planet existed by using established planet-finding methods, such as the transit method.

The new method, whose acronym is BEER (BEaming effect with Ellipsoidal and Reflection/emission modulations), has different strengths and weaknesses than established planet-spotting algorithms, Avi Loeb of the Harvard-Smithsonian Center for Astrophysics said in a statement. Loeb was one of the first scientists to propose the ideas used in the BEER algorithm. “Each novel technique we add to the arsenal allows us to probe planets in new regimes,” he said.

The Kepler-76b discoverers wrote a paper they’ve posted on arXiv, a site for physics papers, many of which haven’t yet been peer-reviewed. The BEER paper should get a review soon, however. The Astrophysical Journal has accepted it, according to the Harvard-Smithsonian Center.