An Oral History of Extreme Sports

"Gravity has always been a major part of my life." 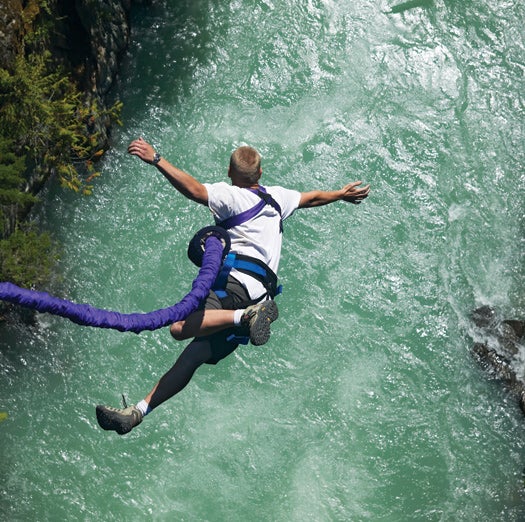 In the waning decades of the 20th century, men from New Zealand began inventing new ways to injure themselves. They jumped from bridges with elastic bands attached to their ankles, ran class-five rapids without boats, and fixed themselves to large kites to achieve great speed. Soon enough, a culture had emerged—one that paired backyard engineering with the pursuit of adrenaline. Today, thanks to these pioneers, brave souls the world over may hurtle through the air, down mountains and up rivers and live to brag about it. In their own words, the inventors explain how extreme sport on this island nation came to be, and where it might go next.

(1954-1980) A sheep farmer builds an engine to travel upriver–and starts a high-speed revolution. 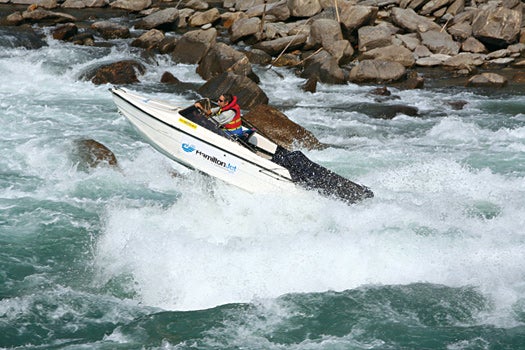 LYNN: Innovation mirrors lifestyle. We’re closer to the outdoors here.
GAMBLE: We’ve got a bunch of braided rivers that you can’t get up with a regular boat. You can’t have anything sticking beneath the water, like a propeller.
PAUL BECKETT (inventor, Blokart): The guy who created the jet boat was a sheep farmer down south.
DAVISON: He was trying to figure out a way to get upriver to go fishing.
GAMBLE: Really, all he did was create a water pump. It sucked the water up through the boat and shot it out through the transom at the back end. It’s a simple principle: Velocity plus weight equals thrust. This was 1954.
AVISON: Bill was like me, a country boy off the farm. When he was young, he fiddled with machines and boats, bits and pieces around the farm. Someone showed him a photo of the Hanley hydro jet, a centrifugal pump they used on a few fire boats in the U.S. Bill built a copy. It didn’t go well. It had an elbow nozzle just beyond the intake. It spoiled the thrust and had a hell of a lot of drag. So they changed it. They stuck the nozzle straight out the back, so now it sucked up water through the intake and shot it out through the air.
TONY KEAN (author, The Ballad of Bill Hamilton): Lo and behold, the speed doubled! And now there was nothing sticking out the bottom. They did an expedition up the Colorado through the Grand Canyon. The jet boat really took off from there.
DAVISON: By 1960, there were a lot of jet boats around here. People used them for climbing through shallow rapids.
GAMBLE: There was this business giving sightseeing tours on the Shotover River. I paid $11,110 for it. Mind you, I had never driven a boat of any kind in my life. This was 1970. That first year, I ran the river the way it had always been run. After so many trips, I started going faster, tried to get as close as I could to the rocks. But a couple of people complained, so I dialed it back. The third year, this older woman—she had to have been 73, 74—said in the middle of the trip, “This is so disappointing! I went down last year, and it was much more thrilling.” After that, I just started driving straight at the rocks. I did a 180, a 360. I credit that woman with completely turning us around. 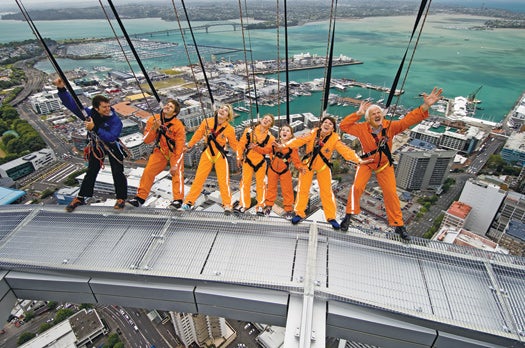 The Age of Innovation (1980-1993) Inventors harness wind and water and realize they can get away with almost anything; it’s nearly impossible to sue. 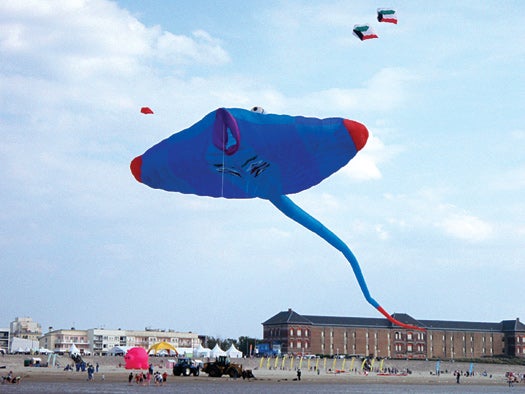 NEIL HARRAP (inventor, Fly by Wire): When you visit New Zealand, you lose the right to sue. It gets rid of a lot of lawyers, I can tell you that.
AKERS: It’s because of the ACC, the Accident Compensation Commission. If you’re injured at work or even while playing, you don’t have to pay anything for treatment. An operator can do anything he likes, but if he’s negligent, he will be prosecuted. So it’s more conducive to trying risky things. Having said that, people have done some really crazy and dangerous stuff.
LYNN: I design very large kites. The world’s six largest kites have been designed in my shop. You would think that would be a pretty safe activity, right, flying kites? There was a time I trashed a restaurant in Sardinia. We were flying a It was 6,800 square feet. We were on a narrow beach, with a strip of restaurants. The kite was hovering over this one restaurant, and in one swoop it removed all the neon signs and satellite dishes from the roof, and the tail of the kite lifted a giant umbrella from in front of the restaurant. This umbrella was weighted with a huge chunk of concrete and the thing was dangling above the restaurant, like this Sword of Damocles. They were trying to get everyone out and people were still trying to finish their wine. But they got everyone. Then the concrete fell and destroyed the entire roof. 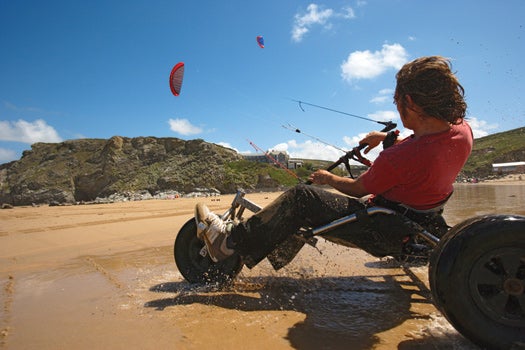 IMHOOF: These things were initiated by people who probably would have done it regardless of making money. For me on the river, I was just having fun. We’d take out friends, then friends of friends. They’d buy us beers.
LYNN: Since 1987, I’ve built something like 200 different kite-powered things—mainly boats but also kite buggies. Most of them have been failures. My wife says I have persistence beyond reason. 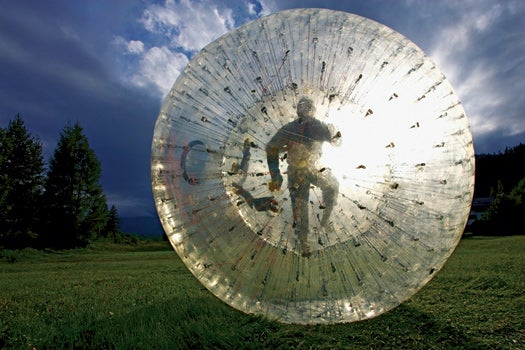 WEIDMANN: We offer the experience of standing on a building in the middle of a city and jumping off. People are absolutely terrified. I mean, tears and everything.
VAN ASCH: Yes, I have tried it. The step-off is similar to bungee.
WEIDMANN: Bungee jumping wasn’t happening in cities—building owners are reluctant to allow it. On the a fan is tied to a shaft that’s wrapped with wire rope. The fan slows down the unspooling rope. You jump, reach a speed of 50 mph—it’s a 630-foot jump—and fall fast all the way until you’ve gone 560 feet. Just when you think you’re going to die, the wire shifts to a shaft that turns the fan faster, and your speed decreases.
VAN ASCH: You don’t have the acceleration and subsequent bounce. The physical and emotional sequence is different.Rolling down a hill inside a padded ball? I’ve always wondered why someone would want to do that.
WEIDMANN: Who made the first jump from the tower? You’re talking to him. We wanted to keep it secret, so we did the jump at 2 a.m. It was not a nice night—drizzly, and there were clouds pouring into the jump zone. I took a leap. I was told that I needed to be quiet because there are all these accommodation buildings nearby, apartments and condominiums. With the clouds, I couldn’t see the ground. I just yahooed all the way down.
AKERS: We were throwing around ideas of crazy things to try. One was walking on water. We thought about inflatable shoes, then we thought about a big plastic ball with a single skin. Then we wondered if a double skin wouldn’t be better. It took three or four months to develop. We took it to the beach to see what we could do with it. But once the wind picks up, it’s like a big sail with a person in it. You’d start getting blown out to sea and there was nothing you could do. But people noticed. It’s clear and plastic and beautiful. So we began to think about how we could make money off it. As a total fluke, we thought about rolling it down a hill. My parents had a farm, so we took it there. It was scary, standing on top of that hill, wondering what would happen.
HARRAP: Rolling down a hill inside a padded ball? I’ve always wondered why someone would want to do that.
AKERS: The whole thing, rotates only once every 33 feet, so there’s not a problem with throwing up. We started developing a harness system. With that, there’s no problem at all; you’re completely pinned in. We also put water inside it. The water acts as a lubricant—it keeps you on the bottom the whole time, and the ball moves around you. It’s like going down a huge waterslide.
WEIDMANN: There was also a thing called Fly by Wire and an incident where some gear went wrong.
HARRAP: I thought, imagine if you had a swing, but instead of just going backwards and forwards, you could move in a figure-8 pattern. Think of it as a thread that you simply thumbtack to the ceiling. The thread hangs straight down, and then you tie a matchstick to the thread. That’s it, basically. But the matchstick has a motor on it. A “powered steerable swinging device,” that’s the patent name.
AKERS: I’m not sure if it’s even operating anymore. It sounds fantastic, but it’s the kind of idea where, if something goes wrong, it goes really wrong. 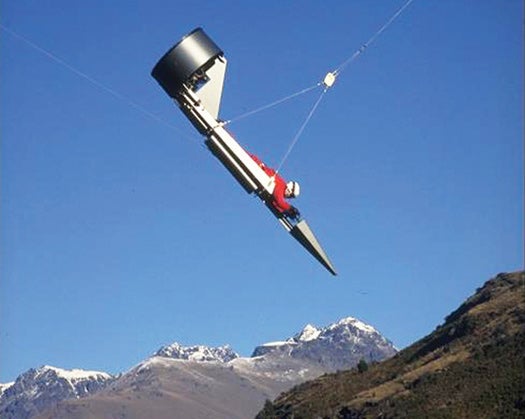 HARRAP: I experimented in my garage, hanging things from the ceiling. Then I hung ropes from trees. I tried to figure out the basic physics of it: I needed a plane thing, with a tail and a propeller, maybe. I brought in an aeronautical engineer. He said, “Don’t put the propeller in the front, put it in the back! If the prop blows up, it wouldn’t be good.” When you’re traveling 60 mph, when you get really close to the ground, when you really think you might hit it—that’s a real rush. The top of the arc is 300 feet off the ground. We winch them back, you release the plane, and then you’re falling. And not only are you falling, you’re being driven down by the engine. If a person flies it just once, the only thing they’re interested in doing is going fast. Of course, we encourage that.
AKERS: A woman got injured in a crash
WEIDMANN: She nearly lost her arm.
HARRAP: I wasn’t able to defend myself against the charges.
WEIDMANN: It’s not the concepts that are dangerous, it’s the operators. I won’t name names, but you’ve had instances where ankle harnesses didn’t work on a bungee jump.
HARRAP: They tried to push helmets on me—inspectors, safety people. What did we need helmets for? The odds of a bird strike are zero. Birds are terrified of the thing.
HAY: The focus on safety today is stifling
IMHOOF: A lot of time the law is an ass.
AKERS: What’s next? A few people have mentioned the idea of a commercial catapult operation where people are flung across an area into a giant net, or water.
HARRAP: Korea, Turkey, these are the places that really want Fly by Wire now. The people in Korea want to take it clear across Asia.
HAY: You could put people in a Zorb and throw them in a river. That would be pretty cool. People would do it. I’ve done it with friends. I’ve also toyed with the idea of dropping people in the middle of nowhere and letting them find their way out.
LYNN: I’ve broken many bones. I broke my nose twice in one day. I have an excess of determination and an insufficiency of skill. That’s the key.
HAY: Are there some activities that are too risky? No. I say go for it. Bungee cords fail. Carabiners fail. That’s how it goes. Then the gear gets better because of it. That’s how the planet evolved, didn’t it?