Feeding flies a "cryoprotectant" can save them from the cold 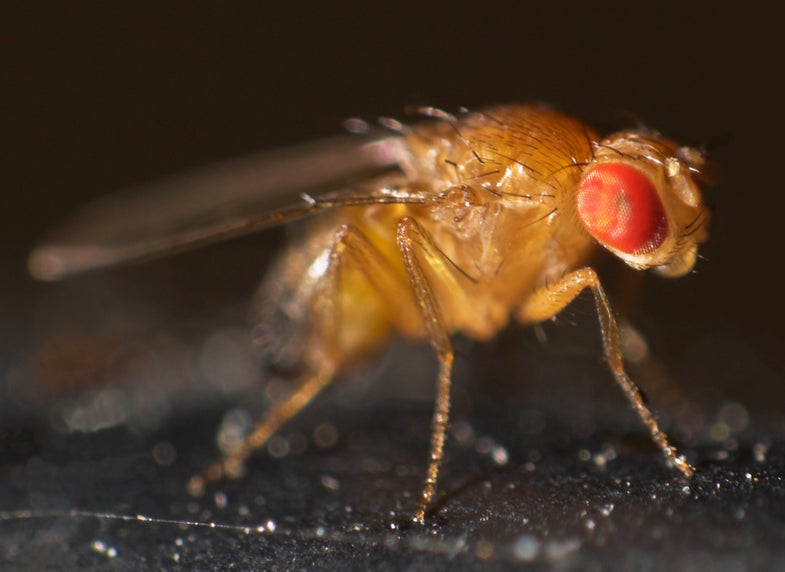 A larval fruit fly is hatched in the year 2011 and frozen while still pupating, half its body water solidified in frigid temperatures. After spending many generations in a state of suspended animation, the wee Drosophila melanogaster awakens and is allowed to grow up. One day, it wonders if it will ever be able to mate — but should it bring new larvae into this dystopian future?

As it turns out, the fly can successfully mate after all, and its offspring are perfectly healthy new larvae. Too bad for the fly, it dies in the lab so scientists can find out exactly how it survived this cryopreservation.

Vladimír Koštál and fellow researchers in the Czech Republic did this very experiment and they say fruit flies can survive being frozen at 23 degrees F, so long as they are fed a special pre-freeze diet containing an amino acid from their Arctic cousins.

Freeze tolerance is thought to be a highly complicated process in animals — only a few insects can do it at all, while the accumulation of ice crystals in most vertebrates’ bodies is either very harmful or fatal. Koštál and colleagues wanted to find out how complex it would be to help D. melanogaster, one of the most important model organisms in modern biology, survive freezing temperatures. Pretty easy, actually, as long as they were fed a cocktail of cryopreservative before entering the big chill.

An Arctic fruit fly relative called Chymomyza costata can survive being submerged in liquid nitrogen — that’s -320 degrees F — and in previous research, Koštál et. al figured out they do this by accumulating an amino acid called L-proline in their bodies. In this new study, the Czech researchers fed fruit fly larvae a diet containing L-proline and glycerol, another cryoprotectant, and cooled them down. Treated larvae were able to survive after half their body water froze, which happened at 23˚ F (-5˚C). The flies were frozen for 75 minutes before being slowly warmed.

“Upon melting, these larvae were able to continue development, metamorphosed into adults, and produced viable offspring,” the researchers say.

Other researchers have been trying to make freezable fruit flies to better understand the genes underlying susceptibility to cold. Figuring out how organisms flourish in cold could help researchers understand how humans could, too — not necessarily to cryogenically preserve us, though that would be awesome, but to help organs survive on ice for longer periods so they can be transplanted. This research could have implications along those same lines, but it could also just be a handy solution for biologists working with flies — their unique genetic lines could be preserved in a deep chill, instead of requiring large and costly gene pools of live flies.

The paper was published in the Proceedings of the National Academy of Sciences.