Wiping out bycatch before it wipes out more marine life 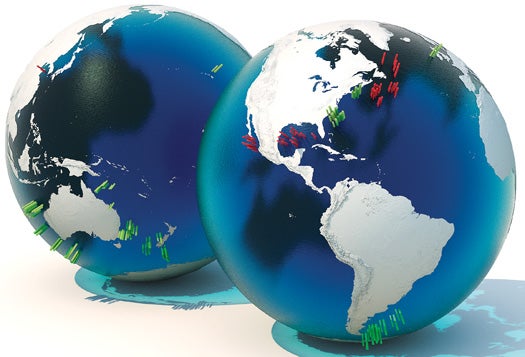 Last year, fish consumption reached a global annual average of 37.5 pounds per person. Meanwhile, cod and bluefin-tuna populations have collapsed, and animals ranging from whales to turtles have been added to the Endangered Species Act. Our voracious appetite isn’t the only problem. Fishermen catch a lot of things unintentionally, in what Tim Werner, director of the New England Aquarium’s Marine Conservation Engineering program, calls the “collateral damage” of commercial fishing: bycatch.

Compared with the more intractable problem of overfishing, technological solutions to bycatch abound.Bycatch ensnares coral, sponges, starfish, sharks, whales, turtles and even birds. It is “one of the more immediate threats that marine diversity faces,” Werner says. It has led to the assumed extinction of the Yangtze River dolphin, has nearly wiped out the Gulf of California’s vaquita porpoise (fewer than 200 remain), and threatens the survival of the North American right whale (400 remain) and the short-tailed albatross. A United Nations report estimates bycatch at 7.5 million tons a year, or 5 percent of the total commercial-fishing haul. Because most available data is self-reported, Werner says that the U.N.’s numbers “woefully underestimate” the problem. A more representative statistic, he says, comes from Gulf of Mexico shrimp fisheries, some of which dredge up to five pounds of bycatch for every pound of shrimp.

The good news is that compared with the more intractable problem of overfishing, technological solutions to reduce bycatch abound. Shrimp companies, for example, have begun using “turtle-excluding devices,” metal grates at the front of a trawl net that let the shrimp in and keep the turtles out. Fishermen who use long subsurface “gillnets” have begun to deter porpoises by equipping these nets with battery-powered acoustic “pingers.” In the best cases, pingers have reduced casualties from 25 porpoises per net to one. At Florida Atlantic University, associate professor Stephen Kajiura is trying to protect sharks by affixing rare-earth elements to the lines that fishermen use to catch tuna. The metals react with seawater to create an electromagnetic field that repels sharks (as well as skates and rays). 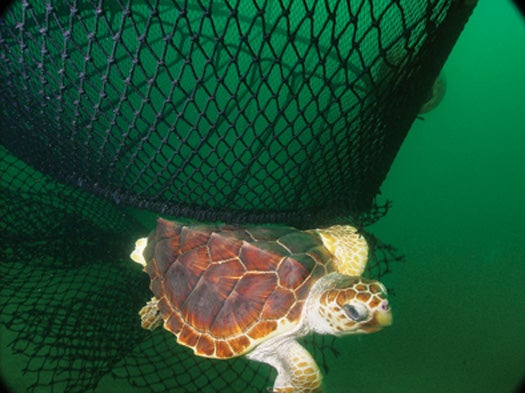 “Turtle-excluding devices” reduce the number of turtles caught in trawl nets by 97 percent, while only minimally reducing the shrimp catch.

The most effective solutions will be those that are cheap and easy to implement. Jeffry Fasick, an assistant professor at Kean University, is studying the vision of the North Atlantic right whale in an effort to develop brightly colored ropes that the animals can see and avoid. The quintessential cheap-and-easy fix, however, may be the “weak hook,” thinner hooks that bend under the weight of animals (bluefins, sharks, whales) larger than the yellowfin tuna they’re designed to catch. In a field test, NOAA found that weak hooks reduced bycatch of endangered bluefin tuna by 56 percent—results significant enough that the agency may soon mandate weak hooks in bluefin-tuna territory.