Residents of New Jersey, a state well known for its elegant aesthetic sense, are unhappy with the solar panels installed … Continued 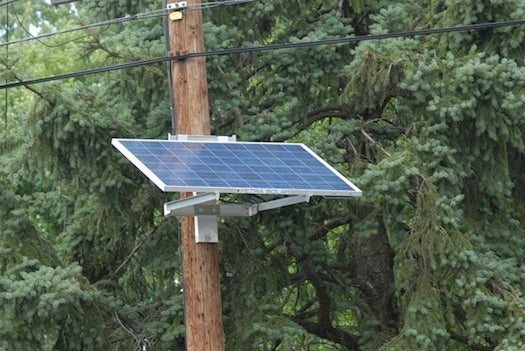 Residents of New Jersey, a state well known for its elegant aesthetic sense, are unhappy with the solar panels installed on electrical poles in leafy residential neighborhoods by the state’s largest utility company. In suburban Bergen County, locals call the panels “ugly,” “hideous,” and an “eyesore,” in addition to protesting their installation with complaints and (possibly) vandalism, according to the New York Times.

New Jersey has a robust alternative energy plan that aims to secure 23 percent of its electricity from renewable sources within ten years–an ambitious goal that’ll be all the more difficult to achieve if suburbanites protest the installation of solar panels on their streets. At the moment, there are talks in some towns about the efficiency of the current setup compared with how much the residents are annoyed by them–some say the panels interfere with emergency call boxes, or that spreading out the panels in this way somehow impedes efficiency (that part’s not true, according to solar experts). But it looks like New Jersey’s solar plans aren’t in any serious danger: The resistance is only in certain small pockets of the state, and the utility owns the electric poles anyway, so there’s not much those angry suburbanites can do. Maybe they’d prefer some ivy-shaped panels instead?