The U.S. Forest Service has battled fire with fire for nearly a century, but it wasn’t until the past decade... 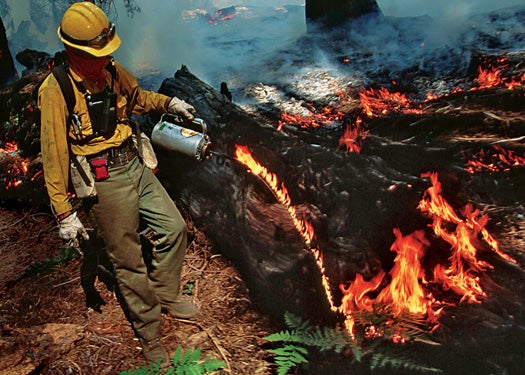 The U.S. Forest Service has battled fire with fire for nearly a century, but it wasn’t until the past decade that backburning–in which professionals set brush alight before a wildfire does–became an exact science. Wildfire experts call this science prescribed burning, and its practitioners are known as burn bosses. Here are three increasingly precise tools to stop a wildfire cold.

Deployed during huge backcountry burns, heli-torches launch a mixture of gelled gasoline (napalm) from a 55-gallon drum housed within the belly of a helicopter. Aerial burn bosses can set a mile of prescribed burns at a time, but they must have a steady hand–it’s easy to lose control of the flame. For this reason, heli-torches are rarely used outside of Alaska.

For safer, more-precise firestarting, burn bosses launch ping-pong-size ignition spheres from a helicopter or airplane. As the balls tumble through the sky, about three grams of potassium permanganate and two milliliters of antifreeze mix. They hit the ground and, after 40 seconds, burst into flame. The heat generated from the reaction melts the sphere’s plastic casing and ignites the surrounding kindling. 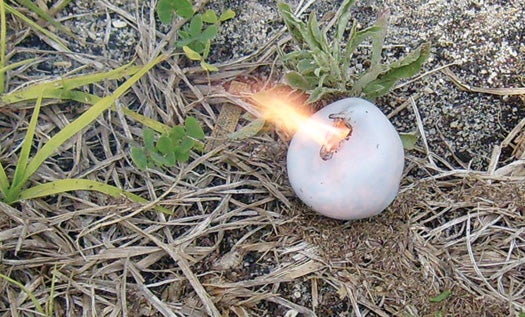 Plastic ignition spheres burn for about two minutes and create an even fire pattern that is easier to control.

Mounted to a truck or ATV, the Green Dragon looks like a water cannon and launches flammable spheres, called Dragon Eggs, using a pressurized CO2 canister. Working on the ground, burn bosses can respond to fires more quickly. The machine shoots the plastic spheres up to 225 feet at a rate of 35 a minute. The device was first tested in 2009 and is now used in Colorado, California and Alaska.