Do big investments from an oil refiner and a trash hauler mean Enerkem is close to cracking the code? 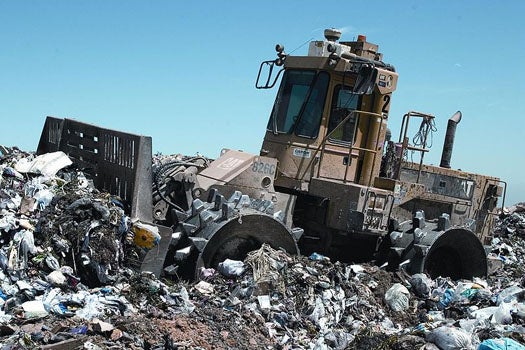 Montreal-based Enerkem wants to turn all this waste into ethanol. Ropable via Wikimedia
SHARE

Burning garbage to make energy–on its face, anyhow–seems like a win-win proposition, but the chemical arithmetic has never really added up to a winning proposition. Nonetheless, a major energy supplier and a big time trash hauler are both finding value in Montreal-based Enerkem. Today the company announced that oil refiner Valero and sanitation giant Waste Management are pumping a combined $60 million into the company, whose technology turns old utility poles and household garbage into ethanol.

Like many energy start-ups, Enerkem isn’t exactly established just yet–the company is just getting underway at a plant near Sherbrooke, Quebec, that the company claims will produce 1.3 million gallons of ethanol annually. The infusion of cash should help the company scale up to even bigger refineries–if the technology proves feasible, that is.

The fact that two major companies are willing to gamble big dollars on it bodes well. Enerkem’s CEO is confident that its process works in a cost effective manner, mainly because while many other companies are trying to make ethanol from waste products, they are paying for their feedstocks. Enerkem is paid to dispose of the garbage it burns, making its raw materials “cost negative.”

The technology itself is fairly straightforward: a plant receives municipal solid waste, which entails pretty much anything that goes out with the household garbage. Recyclables are separated out, the waste is shredded and heated to about 750 degrees. Hydrogen and carbon monoxide are trapped as they escape the incinerating rubbish and impurities like carbon dioxide are filtered out. The pure gases are then run over a catalyst, which converts them to methanol. A further refining step turns the methanol to ethanol or other feedstocks.

By consuming garbage, no potential food resources are sacrificed to make fuel. The trash doesn’t end up in a landfill, where it would slowly decompose and give off methane, a greenhouse gas. And, you know, it’s trash. If we were using it for anything else, it wouldn’t be there.

Enerkem is currently building a second refinery in Edmonton, Alberta, that could produce up to 10 million gallons of ethanol per year, and a twin plant is slated to open in Tupelo, Miss., thanks to a $50 million DOE grant. Each would devour 100,000 tons of garbage annually. If it can get the model off the ground and working cost-effectively, it could be a paradigm-shifter for both energy production and waste management. Four-dollar gasoline and a $60 million cash infusion won’t hurt.