A Material Based on Sharkskin Stops Bacterial Breakouts

A whale’s skin is easily glommed up with barnacles, algae, bacteria and other sea creatures, but sharks stay squeaky-clean. Although... 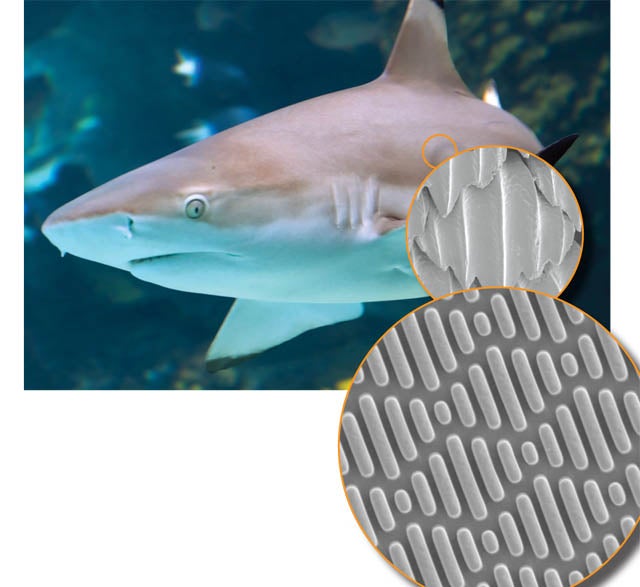 A whale’s skin is easily glommed up with barnacles, algae, bacteria and other sea creatures, but sharks stay squeaky-clean. Although these parasites can pile onto a shark’s rippled skin too, they can’t take hold and thus simply wash away. Now scientists have printed that pattern on an adhesive film that will repel bacteria pathogens from hospitals and public restrooms.

Patented by Sharklet Technologies, a Florida-based biotech company, the film, which is covered with microscopic diamond-shaped bumps, is the first “surface topography” proven to keep the bugs at bay. In tests in a California hospital, for three weeks the plastic sheeting’s surface prevented dangerous microorganisms, such as E. coli and Staphylococcus A, from establishing colonies large enough to infect humans. Bacteria have an easier time spreading out on smooth surfaces, says CEO Joe Bagan: “We think they come across this surface and make an energy-based decision that this is not the right place to form a colony.” Because it doesn’t kill the bacteria, there’s also little chance of the microbes evolving resistance to it. Hey, it’s worked for sharks for 400 million years.

That’s good news for hospitals, where infections from drug-resistant superbacteria like MRSA, a potentially fatal strain of staph, are becoming commonplace. Bagan hopes to stick the skin on nursing call buttons, bed rails, tray tables and other surfaces by next year. Pending FDA approval, the shark pattern could be manufactured directly onto bacteria hotbeds like catheters and water containers by 2012. First, though, look for Sharklet on high-touch surfaces like door handles in restaurant restrooms around the U.S. later this year—a welcome extra line of defense against those who forget to wash their hands.