The earliest known attempt at earthquake-proofing dates to the sixth century B.C., when builders in modern-day Iran inserted stone blocks... 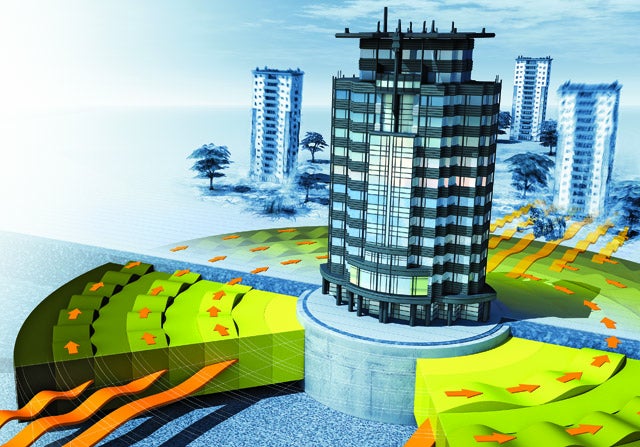 The earliest known attempt at earthquake-proofing dates to the sixth century B.C., when builders in modern-day Iran inserted stone blocks between a structure and its foundation to reduce vibrations. Today’s engineers buffer buildings with metal springs, ball bearings and rubber pads, all designed to sop up the energy from seismic waves. This summer, a team of physicists at the University of Liverpool in England and the French National Centre for Scientific Research tested a different strategy: redirect the waves altogether.

Instead of absorbing tremors, a shield buried around a skyscraper simply reroutes them, like water running around a boulder.

The design consists of a concrete-and-plastic plate of concentric rings that encircles the foundation. The materials are arranged from stiffest to most flexible from the outer ring to the innermost. Waves follow the path of least resistance toward stiffer rings and bend away from the foundation as they pass through the plate. Computer simulations show that it could protect against the most destructive 70 percent of waves that travel horizontally in the soil from the epicenter. In theory, “this could protect any structure,” says Michael Tantala, a civil engineer and earthquake expert at Tantala Associates in Philadelphia.

Engineers will probably combine traditional dampeners with the plate because it doesn’t protect against all types of waves, yet it could be particularly useful in areas where waves traveling horizontally are more destructive, such as parts of Seattle and San Francisco. “Everything around the building will be devastated,” says Sebastien Guenneau, one of the plate’s developers, “but the building itself will stay still.” Next year, engineers will test a two-foot-wide model of the design, and the tech could be on both new and old buildings as early as 2014.