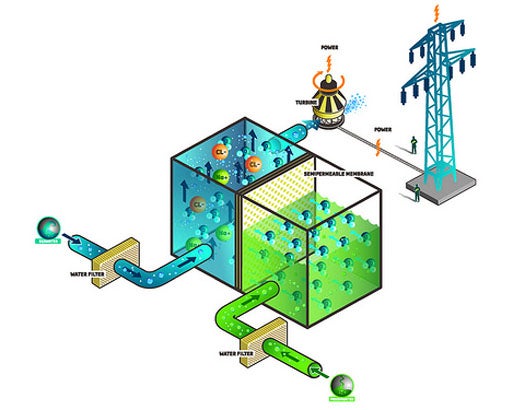 When it comes to harnessing the energy potential of the oceans, the Norwegians have no problem starting small. The world’s first osmotic power plant opened today in Tofte, Norway, utilizing the properties of salty seawater to generate a whopping 4 kilowatts of electricity for the grid, or about enough to power a coffee maker. But the Norwegian company running the project, Statkraft, is a glass-half-full kind of company, claiming that eventually osmotic plants could draw half of Europe’s electricity from the saltiness of the sea.

Osmotic power works by separating saltwater and seawater in two chambers separated by a polymer membrane that will only allow freshwater to pass through. The salinity of the seawater draws the freshwater through the membrane, creating a great deal of pressure on the seawater side. That pressure can be used to turn a turbine to create power.

Just as technological innovations made Hywind and Snovhit possible, advancements in membrane technology have vastly increased the efficiency, as well as lowered the cost, of osmotic power. The Tofte plant cost between $7 million and $8 million, not too shabby for a power plant if, of course, it can offer more than just a pot of coffee. One quick solution: implement osmotic plants near desalination facilities, which produce a briny water twice as salty as seawater as a byproduct.

Double the osmotic pressure potential, and suddenly we’re up to two coffee makers. Slowly but surely, progress is made.