What you gonna do when the sea lions come for you? 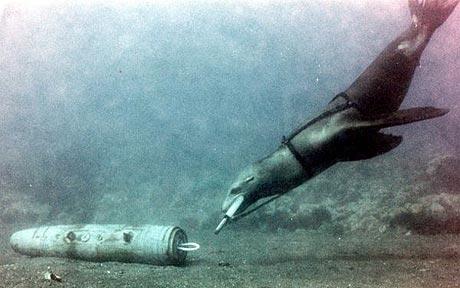 This mine stands no chance against Navy-trained sea lions

Californian sea lions have become U.S. Navy recruits alongside dolphins and human divers, as seen in this amazing picture. The Daily Telegraph reports that this particular fellow put on a display for officials at the NATO Underwater Research Center in La Spezia Bay, Italy.

The sea lion demonstrated his minesweeping skills by swimming down to a fake mine and putting a clamp onto the device, so that handlers from the U.S. Navy’s Space and Naval Warfare Systems Center Pacific could reel it in. The sea lion has also learned to attach leg cuffs to enemy divers, immobilizing them and allowing human sailors on the surface to pull in the intruders. A special sea lion harness can also carry cameras that provide live underwater video.

The U.S. Navy has now begun using its sea lions to patrol for terrorists or other underwater saboteurs at a base in Washington State.

Now Hollywood just needs to add sea lions, dolphins and Navy lasers to a revised underwater fight scene ala Thunderball, and it has the next Bond film’s climactic piece.

[via [The Daily Telegraph]