With over 70 percent of the world’s natural fisheries taxed beyond the point of replenishment, the demand for farmed fish... 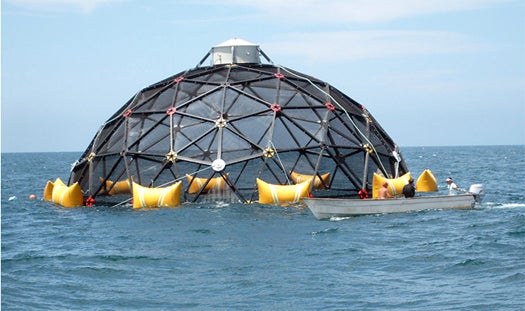 With over 70 percent of the world’s natural fisheries taxed beyond the point of replenishment, the demand for farmed fish will only rise in the coming years. Unfortunately, the cramped conditions and shallow locations of most existing fish farms result in low yields and sickly, parasite-ridden fish.

That’s where Cliff Goudey, director of the Massachusetts Institute of Technology’s Offshore Aquaculture Engineering Center, comes in. He has attached robotic motors to a giant fish cage, allowing it to travel around the sea, rather than stay tethered in shallow water.

Goudey’s specially equipped fish cage is the first step in a project to create giant mobile fish farms that would encase entire schools of fish, and travel with them through their natural migration routes. These “free range” fish would avoid the health and size problems associated with the current stationary fish farms, helping the farmers increase yield and relieving pressure on overextended fisheries.

So far, Goudey admits that the project is a little too futuristic to attract most fish farmers. But with plans to equip future models with GPS systems and radio transmitters, the day when a fisherman steers his fish towards his boat, not vice versa, may be approaching.