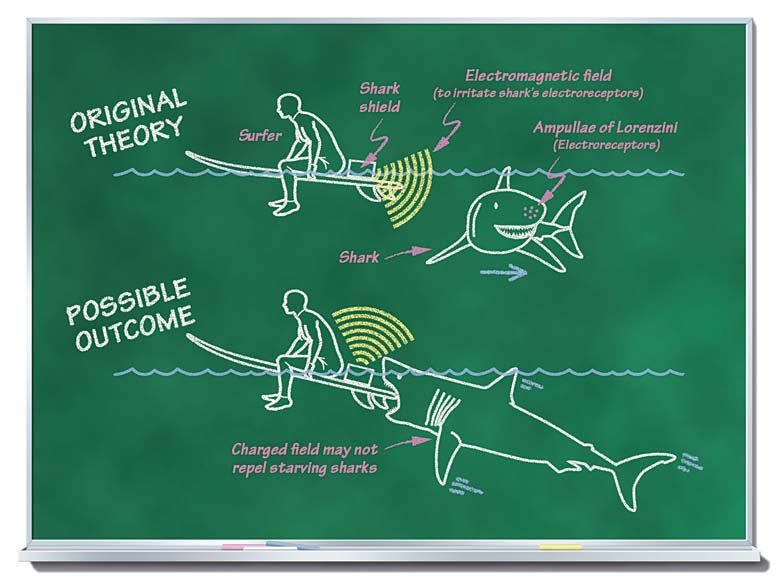 Back to the Drawing Board

In 2002, an Australian company called Shark Shield released a brick-size transponder meant to keep away the worst fear of every diver and surfer: sharks. The thinking behind Shark Shield’s eponymous gadget is simple enough. Sharks have electroreceptors in their snouts, called ampullae of Lorenzini, that detect electric fields for navigation and predation. By emitting an irritating electric field, the idea goes, the Shark Shield would trigger a nasty sensation in the ampullae, forcing even the hungriest hammerhead to turn on its fin.

But this March, during an investigation of a 2005 shark attack in Australia, the shield’s effectiveness came into question after reports surfaced that a great white shark ate a chunk of bait hanging from a float carrying a prototype for surfboards. Could the electric field actually attract sharks? Rod Hartley, a co-founder of Shark Shield, says no and argues that the failed gadget was just a test unit with an undersize antenna. “Our final design works 100 times out of 100,” he insists.

Experts aren’t entirely convinced. Studies have shown that sharks will often turn away when they detect certain types of electric fields, says Christopher Lowe, a marine biologist at California State University at Long Beach. “But we also know that a highly motivated shark—one that’s rushing for prey, for example—can penetrate it.” And it’s important to note Shark Shield’s disclaimer: It works when the board is stationary but could be ineffective if the surfer is paddling or riding a wave.
It’s possible that the electric field only momentarily startles sharks, and scientists don’t think one device will repel (or attract) all species of sharks. “Animal behavior isn’t consistent in different conditions,” says Peter Klimley, an animal behaviorist at the University of California at Davis. “Anyone who says something works [with animals] 100 percent of the time is lying.”