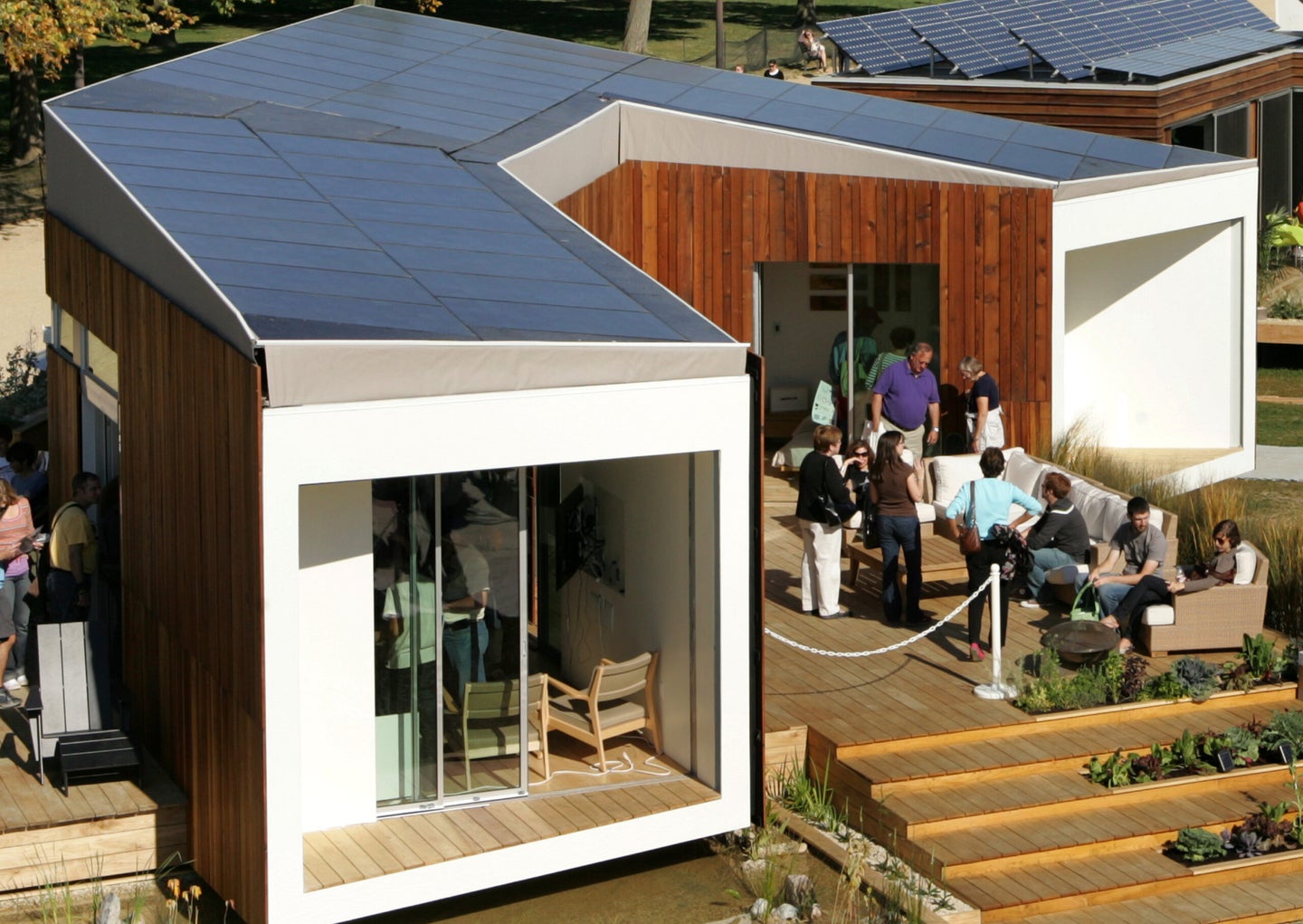 The bright future of green living has been on display for the past two weeks at the National Mall in Washington, D.C., during the Department of Energy’s 2009 Solar Decathlon. The biennial contest, which wraps up this weekend, brings hundreds of university students from around the world to a temporary solar village for two weeks, where spectators can walk through student-designed houses and marvel at the latest green tech.

These solar homes have it all, including things that aren’t commercially available yet — like self-activating curled-metal shades; walls made of plants, both living and recycled; and roofs that tilt at the sun, making them efficient sun-catchers from Phoenix to Fargo. Worried about efficiency while you’re away? How about an iPhone app that controls your entire house?

Teams include engineering, architecture, graphic arts and marketing students, who typically wouldn’t work together until they reach the workforce.

Team Germany’s “surprising” design took first place overall, partly because their house performed so well in the net metering contest, which measured how much net energy the house produced and consumed throughout the competition. The house had solar panels on the walls as well as the roof, which improved its performance even with cloudy conditions. Team Germany scored 150 of 150 points in net metering, catapulting them over the University of Illinois at Urbana-Champaign to win the title.

Aside from being an unrivaled educational opportunity, the decathlon is a proving ground for a new generation of energy-efficient products and designs. Some, like floor heating tubes warmed by the sun, seem so obvious it’s a wonder every house doesn’t already have them; others are most certainly modern.

“You learn skills like communicating, team-building, executing, all these things — we call it Startup 101,” said Preet Anand, a senior at Santa Clara University in Santa Clara, Calif., who is the lead water engineer on Team California’s Refract House. “What we have learned … you can’t compare that to any other college experience.”

Part of the decathlon’s mission is to speed up delivery of emerging technology to the marketplace. Several teams worked with companies in their home states to invent new materials or products, some of which are awaiting new patents.

Valence Energy, a company comprised of Santa Clara University alumni who participated in the 2007 contest, helped Team California design a whole-house control system that can be operated via an iPhone app, Anand said. Lighting, entertainment, heating and water systems, even the window shades all connect to a master computer users can access remotely.

“They helped make everything talk to each other. So you can be on the iPhone or the Web site, and you can change the temperature of your house from the car on the way home,” he said.

Iowa State University’s team worked with a firm called AccuTemp Energy Solutions and with Pella, the window and door manufacturer, to create a better-insulated door for its Interlock House.

Timothy Lentz, a mechanical engineering graduate student at Iowa State, said the door uses vacuum insulation panels to reach an insulation value of R40 — the level of a typical ceiling, and an unheard-of rate for a door.

“This makes it almost a wall,” Lentz said.

Incidentally, many homes are so well-sealed that special ventilation systems also had to be invented. Team Alberta, comprised of students from four post-secondary schools in the Canadian province, designed a hot and cold air exhaust system that saves as much energy as possible. An energy recovery ventilator, which is basically a box fan covered in a special material, allows heat transfer between outgoing and incoming air.

“In old homes, you don’t need to worry about mechanical ventilation because the homes were so leaky. That is not really true in newer, high-performance homes,” said Michael Gestwick, who is pursuing a master’s degree in environmental design from the University of Calgary. “Our system is highly integrated, where many other systems that you’ll see are kind of decoupled — you have one system to do the heating, and a separate one for the cooling, and a ventilating machine on top of all that. We took all these pieces and put them together and wrote control logic to make it work together.”

The teams all spent about two years designing, planning and building their homes. Each house had to be assembled at its respective university, taken apart to be trucked to Washington, and re-assembled on the Mall before the competition began. The houses all feature the latest energy-efficient appliances and home entertainment systems — teams must cook, do laundry and host movie night, among other typical household activities. The 10 categories are meant to prove that solar homes can not only be cool and efficient, but comfortable and livable.

Some teams took the latter to heart, knowing many eco-conscious consumers might not want to live in a house resembling something out of the Jetsons.

“The other houses, while they are really cool and have all the bells and whistles, they kind of look like a spaceship. They wouldn’t really fit in areas that we think of, like mid-size Iowa towns,” Lentz said.

The Iowa State house resembles a ranch-style home sliced in half, with a roof that slants toward the sun. Others took it even further — the University of Minnesota and University of Illinois Urbana-Champaign teams designed homes with traditional-looking gabled roofs, even opting to sacrifice energy-collection capacity for the purpose of aesthetics.

Form versus function is always cause for debate in architecture; Jeff Stein, dean of Boston Architectural College, part of Team Boston, said the decathlon provides a new way of thinking about both. He noted that in Western society, people spend an average of 72 minutes a day outdoors.

“Buildings are hugely important, and they are way more important than the amount of attention we’ve been giving them in the last generation. Now, here comes a different way of thinking about them, and the solar decathlon is a trigger for making that (transformation) come into play,” he said.

Plus, it will help students find jobs. Lentz, from Iowa State, said he wants to work in the realm of building and energy efficiency.

“There is a lot of room for improvement there,” he said. “I’ve met a lot of people who donated products or services who keep asking, ‘When do you graduate?'”