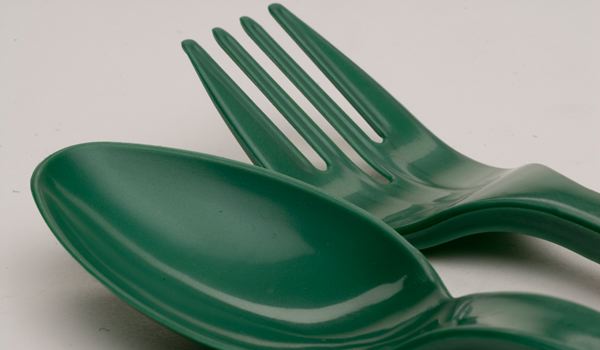 Algae have come a long way in our post-fossil-fuels energy situation: Now the same green scum that covers water and other surfaces could soon be enlisted to make biodegradable green plastics for your picnic cutlery.

That greener future comes courtesy of Cereplast, a California-based firm that has already made renewable plastics using starches from the likes of tapioca, corn, wheat and potatoes. The company says that algae bioplastics could eliminate 50 percent or more of the petroleum that usually goes into making traditional plastic.

The technology remains in the development stages, but Cereplast has already approached other companies about using algae as a natural carbon dioxide and nitrous gas scrubber for industrial smokestacks. The algae could then be harvested daily as either biofuel or material for Cereplast’s bioplastics.

Algae has cropped frequently as a possible biofuel for everything from cars to Virgin Atlantic jetliners. A company called Algenol has looked at converting the carbon dioxide produced by algae farms into ethanol for making plastics, as a more roundabout method. And one startup called Livefuels has even taken the novel approach of squeezing algae-fed fish for oil.

If Cereplast has truly hit upon a cost-effective conversion method for algae, kudos — but for now it joins more than 50 other firms working to make algae part of the renewable future.