Even before a single ounce of natural gas gets burned in a home or power plant, massive amounts of CO2... 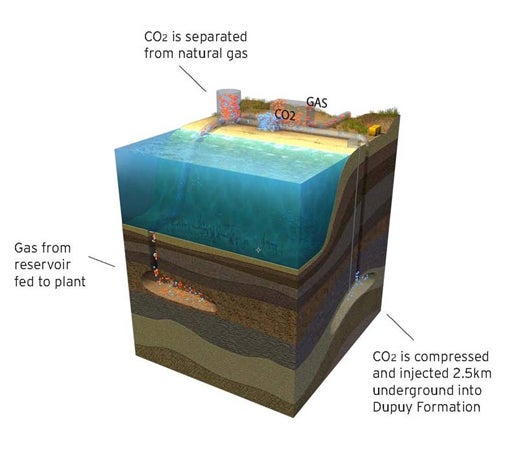 Even before a single ounce of natural gas gets burned in a home or power plant, massive amounts of CO2 have already been released. The process of extracting natural gas releases carbon dioxide pent up in the same wells as the gas, thus adding to the climate-changing impact of the fuel.

To help lower the global warming impact of one of the world’s largest natural gas fields, General Electric has supplied Chevron, Exxon Mobile and Shell with enough compression “trains”–the pumps and turbines that do the sequestering–to create the world’s largest carbon sequestration project. The trains will pump 3.3 million tons of CO2 released from natural gas mining back into the ground every year. That’s the equivalent of taking 630,000 cars off the road.

The project, called Gorgon, won’t go online for a couple of years, and GE won’t begin building the equipment trains for at least another year or two. Once built, the trains will redirect the CO2 back into an underground chamber 1.5 miles under the ocean.

Naturally, this process does not stop the natural gas itself from releasing greenhouse gases when burned for fuel. And why name a project aiming for environmental soundness after a terrifying monster with snakes for hair and a gaze that turns men to stone? Someone at GE needs to get a copy of Bulfinch’s Mythology.